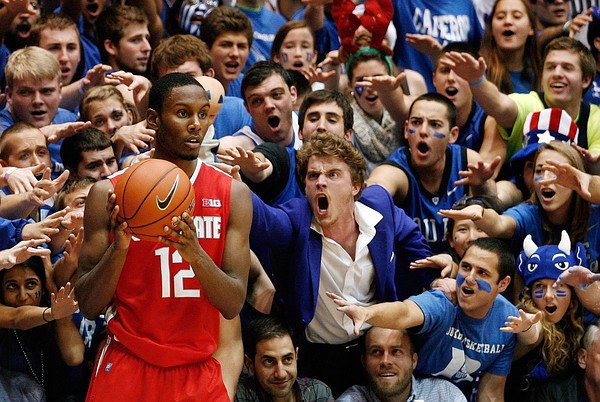 In a bit of a surprise, the ACC took four of six games last night to clinch a tie in this year's Challenge. Let's look at how they did it.

Ohio State played an excellent first half at Cameron Indoor, but the Buckeyes? defense let them down after the break as Duke pulled away. The change in Duke?s efficiency was startling:

This scalding second half can be explained with a basic stat: the Blue Devils made eight dunks or layups in the second half, after making only one in the first half. Duke was able to get much easier looks, often early in the shot clock, and it spelled doom for the Buckeyes.

We harp on it every year, but this game brought another example of the autobench. With just over 10 minutes remaining in the first half, Deshaun Thomas picked up his second foul. Ohio State held a six point lead and was playing great defense, so Thad Matta sat the nation?s best offensive player for the next 10 minutes. Surprisingly, the Buckeyes were able to increase their lead by two points without their star, but it was because of their stout defense (which, incidentally, was just as good with Aaron Craft also autobenched).

Ohio State?s offense was decidedly worse when Thomas was on the bench:

You have to wonder if the Buckeyes could have pushed their lead even higher had Matta ?rolled the dice? and given Thomas some minutes with two fouls. After all, Thomas is anything but an aggressive defender, and his career average is a mere 2.4 fouls per 40 minutes. To wit, Thomas played the entire second half and didn?t pick up his third foul until one second remained, on a silly frustration hack.

Coaches remain too subservient to this bit of conventional wisdom. Matta could have improved his team?s chances of winning by thumbing his nose at it, but he chose not to. Ohio State still gave Duke a very good game and showed that it is truly a top team.

Purdue picked up an impressive road win at Clemson thanks to D.J. Byrd?s unconscious evening. Byrd started the game five-for-five from three, and he was hitting from all angles. One of Byrd?s threes went in off the glass, and he was making shots on the run as well. By the end of the first half, Byrd had 20 points and Purdue led by the same amount. Clemson made things a little more interesting in the second half, but the outcome was never really in doubt.

This is a big win for the Boilermakers, as Clemson could very well end up being a tournament team. Purdue?s nonconference resume is still salvageable, with none of the remaining games looking worse than a toss-up. If Purdue can beat Xavier and Notre Dame to finish 10-3, a solid showing in conference play could be enough to get into the tournament. That would be a great accomplishment for such a young team, and it?s looking possible (if not exactly likely).

Illinois got a tough test from Georgia Tech before Joseph Bertrand took the game over. The athletic junior went on a personal 10-0 run that turned a four point deficit into a six point lead that the Illini would not relinquish. Illinois? man-to-man defense got exposed for much of the first half, as Georgia Tech reached 31 points after just 14 minutes of game time (a nearly 90-point pace). John Groce would then put his team into a 2-3 zone, and it worked wonders to close out the half. After the break, Illinois mixed defenses to great effect, using both man-to-man and a pressuring 2-3 zone:

Georgia Tech is a poor offensive team, but that was still a very good defensive second half for the Illini. More impressive is the overall offensive efficiency posted by Illinois, as Georgia Tech plays very good defense. This continues to look like the best Illini offense since Dee Brown roamed the court. The schedule now sets up for Illinois and Gonzaga to meet on December 8 with both teams 9-0 and ranked in the top 20. The Groce era has gotten off to a rousing start.

Wisconsin and Michigan State have varying reason for concern after last night?s losses. At least the Spartans were on the road; the Badgers have no such excuse. Wisconsin?s defense clearly misses Josh Gasser more than we expected, as a bad Virginia offense was able to put up 1.08 points per trip (the defenses of Lamar, Fairfield, Delaware, and George Mason did a better job stopping Virginia than Wisconsin just did).

It seems unthinkable, but maybe this really is the year Bo Ryan fails to make the tournament. There?s still time to right the ship, but the Badgers would do well to handle California on Sunday.

As for the Spartans, they fell prey to some red-hot Miami shooting, as the Hurricanes went nine of 16 from deep. That?s not necessarily something to worry about going forward–more concerning was Michigan State?s offense, as it was held to a point per trip by a rather mediocre defense. The Spartans shot just 40 percent on twos and scored only five points at the foul line. Gary Harris and Travis Trice both returned and played quite well, so that can no longer be the excuse. Thankfully, Tom Izzo has three weeks of cupcakes on tap, so there?s time to figure out the offense.

In the game that could have clinched an outright Challenge win, Penn State just couldn?t score enough to beat Boston College, which is a sad statement considering how poor BC?s defense is. D.J. Newbill and Jermaine Marshall tried to do everything themselves, combining for 47 points on 26 shots but also turning it over 10 times. The rest of the team was completely ineffective with 14 points on 27 shots.

The ACC did well to manage a 6-6 tie in this season?s Challenge, completely preventing us from putting the word in quotes and raising some questions about a few B1G teams in the process. After two rapid-fire nights of games, the Big Ten rests until the weekend, when the biggest games will be Xavier at Purdue, California at Wisconsin, and an unusual Michigan road trip to Bradley. Don?t be surprised if that last one stays close for a half–it will be the first true road game for freshmen Glenn Robinson III, Mitch McGary, and Nik Stauskas.