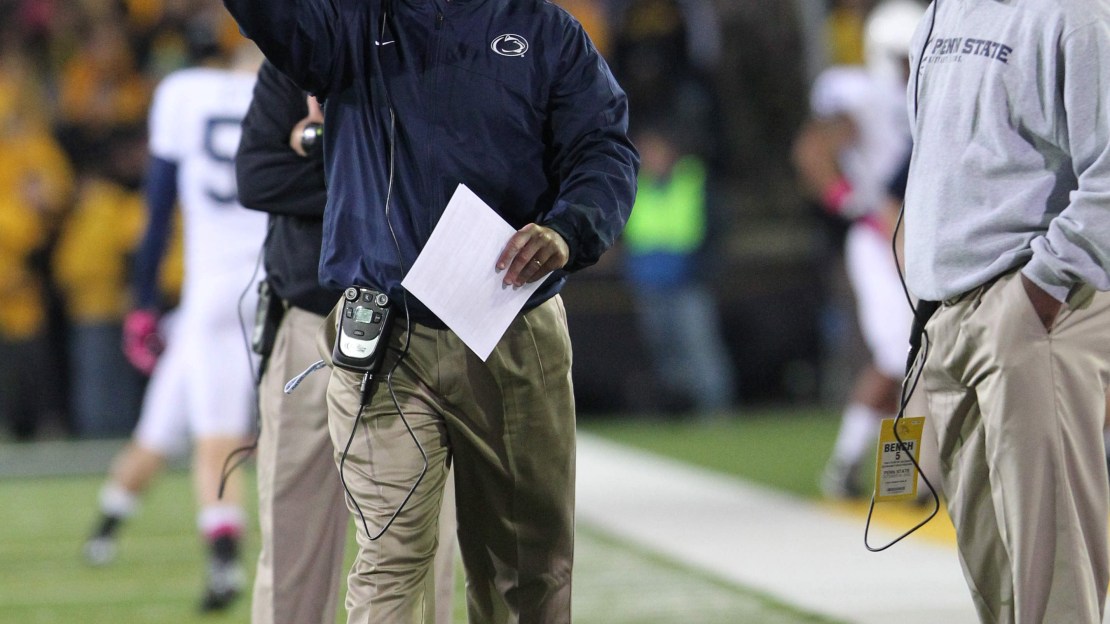 Illinois A.D. Mike Thomas had heard enough speculation about the future of Tim Beckman. So, Thomas squashed it by saying Beckman will be back for a second season. Read about that and other Big Ten grid news in my daily links.

There also is a link to a podcast from the WDWS radio show in Champaign hosted by Steve Kelly and Loren Tate in which Thomas made his proclamation. Yes, Beckman?s debut was a rough one, culminating with a 2-10 mark that was punctuated by a nine-game losing skid. And the losses often were lopsided for a team that struggled mightily in every phase of the game. Still, to change coaches after one season would have been extreme-and unfair to Beckman. But let?s just say he needs to do better in 2013. Let?s begin with ditching the visor.

Are you surprised? I guess we shouldn't be. The fact it was unanimous was a bit of a shock. I thought Ohio State?s Urban Meyer would get a few votes. Nope. But O?Brien?s honor wasn't the biggest Penn State news. Nope. That would be O?Brien saying he?s committed to Penn State and not going anywhere after rumblings of a possible defection to the NFL.

This is great news. I never thought-or wanted to believe-that O?Brien was the kind of guy who would ditch a school after one year. O?Brien walks the walk and talks the talk of being not just a great coach-but a great person of high character.

Mulhern says starting three quarterbacks and the turmoil in the offensive line - there were several injuries and a switch in coaches after two games - have been factors in the Badgers? inconsistency. How inconsistent has the attack been? The Badgers had 564 and 467 yards rushing vs. Indiana and Purdue-and 19 and 35 vs. Michigan State and Oregon State.

Bill Livingston of the Cleveland Plain Dealer writes a nice piece on the reunion of the 2002 Ohio State national champs, who had a reception on Tuesday night.

Of course, Jim Tressel was there. And he was received warmly. This after he was carried off the field on Saturday when the team gathered before kickoff to be recognized prior to the Michigan game. So, I guess this makes it official: Ohio State fans hold no hard feelings toward Tressel for his transgressions that landed the program in this spot where a 12-0 team must stay home for the holidays.

Lincoln Journal Star scribes Brian Christopherson and Steve Sipple already are getting amped for Indy and the Big Ten title game. Who can blame them? This is the Nebraska?s first trip-and it?s coming in just the program?s second season in the Big Ten. In this video, the duo discussed three questions for Nebraska in its clash with Wisconsin.

My question: How will Nebraska deal with an underrated Wisconsin defense that may have the top defensive player in the Big Ten in linebacker Chris Borland?

It looks like 6-6 Minnesota and 6-6 Purdue are competing for bowl spots in Texas: The Meineke Car Care Bowl in Houston and the Heart of Dallas Bowl. The Meineke is the ?better? of the two.

Who will land where? Tough question. Good arguments can be made for and against each school to play in either bowl. For what it?s worth, the Golden Gophers crushed the Boilermakers, 44-28, on Oct. 27. But Minnesota went 2-6 after a 4-0 start-while Purdue finished with three victories in a row. But the Gophers have something the Boilers don?t: a head coach, as Danny Hope was fired on Sunday.

My take: The point-Penn State had some talented players. But they were ?coached up? by someone, right?

Those upset that Big Ten should have gone after Louisville instead of Maryland, it's not about the competition. It's about the TV footprint

My take: Not just that, but Louisville?s academic profile is, ahem, dubious.