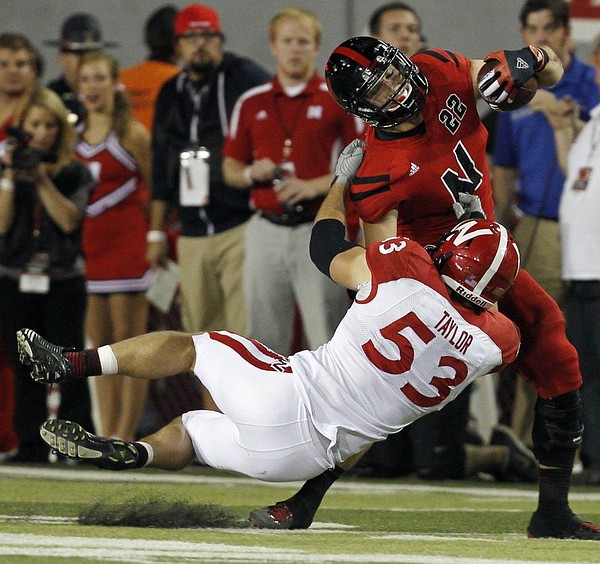 Act Two of the Big Ten title game is almost upon us, but it will be difficult to top last year?s 42-39 sprint that Wisconsin won over Michigan State. Still, Wisconsin and Nebraska will try. Like last year?s Badgers-Spartans game, this year?s Badgers-Huskers game is a rematch of a scintillating regular-season meeting.

On that Saturday night Sept. 29 in Lincoln, Cornhusker quarterback Taylor Martinez led Nebraska on four consecutive scoring drives in the second half to erase a 17-point hole to notch a 30-27 victory (watch the video in this post). In that game, Nebraska had 440 yards; Wisconsin had 295. The Huskers did their damage on the ground with 259 yards rushing, but the Badgers had only 56.

Wisconsin fans will recall starting quarterback Joel Stave was replaced late by Danny O?Brien, who botched a handoff to Montee Ball that resulted in a lost fumble that basically ended the game. Much has changed since then.

The Badgers arrive with a new quarterback in Curt Phillips but also with a slump, having lost two in a row and three of their last four games. All three defeats have come in overtime to Michigan State, Ohio State and Penn State, giving Wisconsin a 7-5 mark overall and 4-4 Big Ten slate. That makes the Badgers the third-place team in the Leaders Division, but they still advanced to the title game because Ohio State and Penn State are on probation. A win on Saturday night in Lucas Oil Stadium will push Wisconsin to a third Rose Bowl in a row. The last Big Ten to do that was Michigan from 1976-78.

Nebraska will arrive in in Indianapolis as one of the nation?s hottest teams, riding a six-game winning streak. Nebraska has made it to the Big Ten title game in just his second season in the Big Ten, as the Cornhuskers are in pursuit of their first conference championship since winning the Big 12 in 1999 under Frank Solich.

Here?s a breakdown of the Saturday night showdown.

Wisconsin rushing vs. Nebraska rush defense: The Badger front has had to deal with injury (tackle Ricky Wagner, among others) and adversity (the firing of line coach Mike Markuson after the second game of year). But the unit has slowly developed into a top front behind Wagner, guard Ryan Groy and center Travis Frederick. They pave the way for a slew of top backs, headed by Montee Ball, college football?s touchdown king. James White also is formidable. The Badgers will face a shaky Husker front, as tackle Baker Steinkuhler is out with a knee injury. Chase Rome and Thad Randle must step up inside. Eric Martin is a top end. But Linebacker Will Compton excels in run support vs. physical offenses like this. And the safeties-led by Daimion Stafford–are good in run support for an aggressive defense.

Wisconsin passing vs. Nebraska vs. the pass: This looks like colossal mismatch in Nebraska?s favor. Wisconsin quarterback Curt Phillips has made just three starts-and his ability as a passer remains pedestrian. Will Nebraska respect his arm? Will he get blitzed? The Badgers lack an array of playmakers on the edge, but Jared Abbrederis-who is coming off a concussion–is one of the Big Ten?s best. He?s an underrated athlete with sneaky speed who also goes over the middle. Jacob Pedersen was named the Big Ten?s top tight end-so that?s all you need to know. Ciante Evans is the Nebraska?s top cover corner. Safety Daimion Stafford isn?t the best cover man, but he still has skills. The Badgers must contain Huskers end Eric Martin, who is a good pass rusher.

Nebraska running vs. Wisconsin rush defense: The Huskers have a nice collection of backs, led by 1,000-yard rusher Ameer Abdullah. And Rex Burkhead returned last week after dealing with a knee issue. True freshman Imani Cross is a physical back. And speedy quarterback Taylor Martinez may be the team?s best runner of all. The battle in the trenches figures to be stout. The Cornhuskers bring it up front with stud blockers like guard Spencer Long and tackle Jeremiah Sirles, but the Mark Pelini will start at center for injured Justin Jackson. They will have their hands full with a Badger line that Bret Bielema says is his deepest yet. Tackle Beau Allen is a massive presence inside, while David Gilbert brings heat off the edge. Wisconsin has an underrated corps of linebackers paced by tackling machines Mike Taylor and Chris Borland, who has missed time of late with a hamstring issue suffered at Indiana. He is supposed to be ready to go. Know this: Nebraska has been loose with the ball, losing a Big Ten-high 20 fumbles. And the Huskers 29 turnovers rank 11th in the league. But the Badgers are last in the Big Ten in turnovers gained with just 12.

Nebraska passing vs. Wisconsin pass defense: Taylor Martinez is No. 1 in the Big Ten in passing efficacy. He also throws to one of the Big Ten?s top collection of wideouts, led by Kenny Bell and Quincy Enunwa. And Ben Cotton and Kyler Reed are a nice duo at tight end. Wisconsin defensive backs Shelton Johnson, Devin Smith, Marcus Cromartie and Dezmen Southward are good-but they will be tested. This will be a fun matchup. End David Gilbert will need to bring some heat off the edge to help the secondary.

Nebraska specialists vs. Wisconsin specialists: Each team has a threat on returns. Ameer Abdullah paces the Big Ten in punt returns and has run one back for a touchdown. Jared Abbrederis also has shown he can go the distance. The Huskers have struggled covering punts. The Cornhuskers have a weapon deluxe in Brett Maher, who kicks and punts. He has made money kicks and has a big leg. Freshman Drew Meyer has performed well on punts for Wisconsin, but kicking has been an issue. Jack Russell began the year as the top option but lost his job to Kyle French after missing an extra point and 41-yard field-goal attempt in the loss to Nebraska. French has struggled of late, missing two kicks (40 and 44) in each of the last two weeks that contributed to losses.

Coaching: Bret Bielema and Bo Pelini are both battle-tested. Bielema has coached in two Rose Bowls and in last year?s Big Ten title game, downing Michigan State. Pelini coached in the 2009 and 2010 Big 12 title games, but he lost both.

Intangibles: One team comes in on a roll with six victories in a roll (Nebraska). The other comes in having lost two in a row and three of its last four (Wisconsin). Enough said.