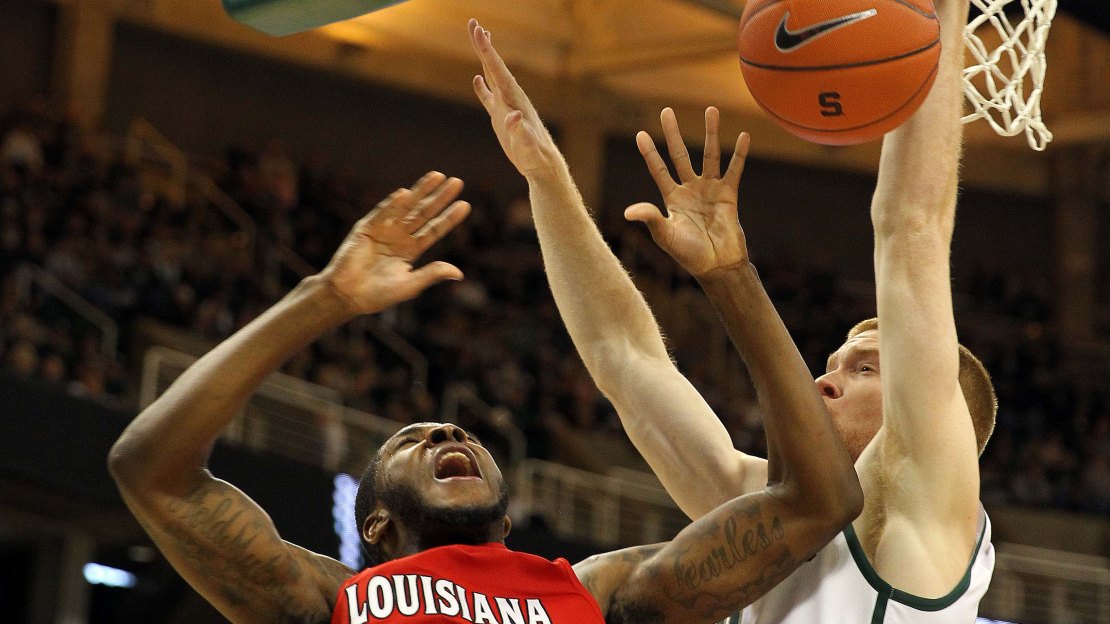 Keith Appling scored 19 points to help sluggish Michigan State survive a scare and beat Louisiana-Lafayette 63-60 on Sunday. Appling, who has scored at least 17 points in every game except one this season, was 4 for 11 from the field. But he made other plays at key times, hitting 10 free throws and adding six rebounds and five assists for the No. 15 Spartans (5-1).

He also had help from several teammates. Branden Dawson scored 11 points and Brandan Kearney 10 off the bench. Adreian Payne had 10 rebounds.

Elfrid Payton had 20 points for the Ragin' Cajuns (2-4). Shawn Long added 16 points, and Kevin Brown had 14. But Louisiana-Lafayette shot just 11 of 21 from the line, which may have cost it a major upset.

FINAL: Keith Appling scored 19 points, grabbed six rebounds and handed out five assists to lead No. 19 Michigan State to a 63-60 win over Louisiana-Lafayette on Sunday at the Jack Breslin Student Events Center in East Lansing. Appling's free throw gave Michigan State (5-1) a 10-point lead with 3:09 to go, but it nearly threw that advantage away. Derrick Nix was 4-of-5 from the floor and chipped in nine points for the Spartans, who shared the ball to the tune of 12 assists on 20 baskets. Michigan State also got double-digit efforts from Brandan Kearney, who scored 10 and Branden Dawson, who scored 12.

HALFTIME: No. 19 Michigan State found itself trailing Louisiana-Lafayette late in the first half, but a 9-2 run allowed the Spartans to take a 33-27 lead into halftime. Trailing 21-15, the Spartans used an 8-0 run to blow past the Ragin' Cajuns and take a two-point lead. Michigan State's Keith Appling is putting together a nice game, with seven points and four rebounds. Shawn Long and Elfrid Payton have shouldered the offensive burden for the Ragin' Cajuns, scoring 24 of the team's 27 total points.