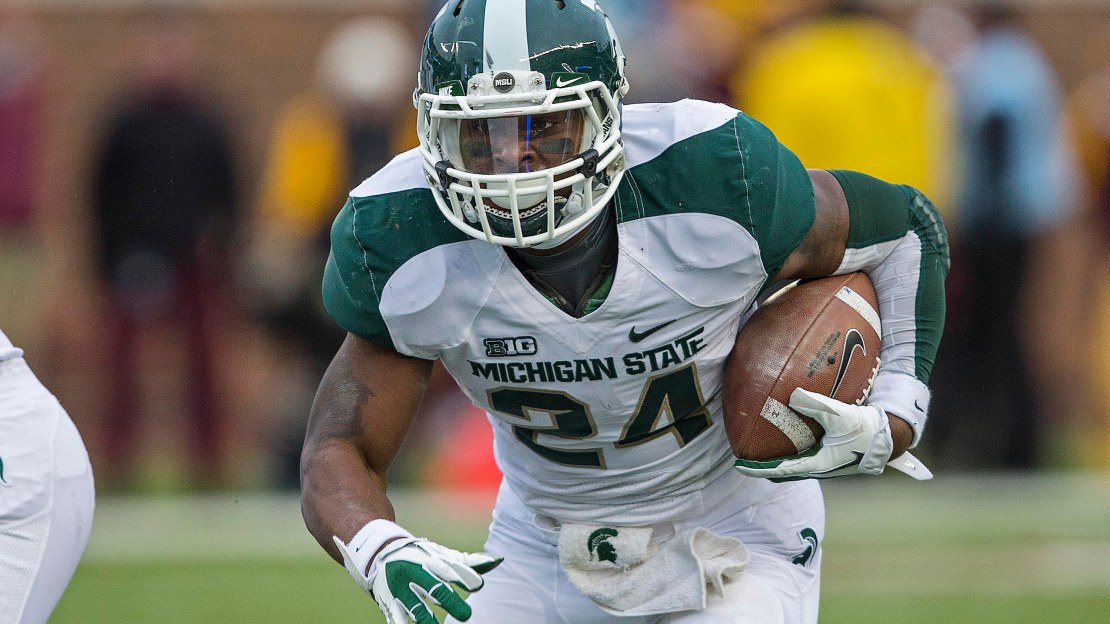 Le'Veon Bell rumbled for a career-high 266 yards and a fourth-quarter touchdown to put the game away, leading Michigan State to a 26-10 victory over Minnesota on Saturday to secure a spot in a bowl game.

Minnesota played the second half without coach Jerry Kill on the sideline. The team didn't immediately give a reason.

Aaron Hill's 33-yard interception return for a touchdown gave Minnesota a lead it kept for more than 18 minutes in the first half, but Jordan Wettstein's season-long 48-yard field goal was the only offensive score for the Gophers, who had a season-low 96 total yards — and just 4 yards rushing.

Philip Nelson threw three interceptions, two by Johnny Adams, and was replaced in the fourth quarter by Max Shortell, who was picked off too.

FINAL: Le'Veon Bell put the team on his back in Michigan State's 26-10 win over Minnesota on Saturday at TCF Bank Stadium, rushing for 265 rushing yards and one touchdown. The Spartans' explosive offense used big plays to take down the Golden Gophers. Michigan State had five plays of 20 yards or more on its way to victory.

With 1:28 to go in the second quarter, Andrew Maxwell and Bennie Fowler combined for a 41-yard touchdown, the Spartans' longest play on the day. The touchdown gave Michigan State a 13-7 lead.

Minnesota's ground game was halted by the Spartans' impenetrable defense. Michigan State held the Golden Gophers to a mere seven yards on the ground.

The Spartans' Maxwell was good for 142 yards during the game, completing 13 of 29 passes. Maxwell tossed one touchdown and two interceptions. Fowler was a key target for Maxwell. He caught eight passes for 110 yards and one touchdown.

Johnny Adams showed good hands on defense for Michigan State, picking off two Minnesota passes. He intercepted Philip Nelson on third-and-6 during a key drive in the first quarter.

Le'Veon Bell runs for touchdown to put game out of reach:

Minnesota made the score 16-10 after Jordan Wettstein kicked a 49-yard field goal to finish off a 28-yard drive.

Bennie Fowler clinched a 100-yard receiving game with nine yards in the quarter, part of his seven-catch, 102-yard day through three quarters for Michigan State.

The Spartans are poised to score with the ball at the Golden Gophers' 13-yard line to start the fourth quarter.

SECOND QUARTER: Michigan State held Minnesota to 13 total yards during the second quarter and the Spartans have taken the lead 13-7. Michigan State has scored 10 unanswered points. Andrew Maxwell's 41-yard touchdown pass to Bennie Fowler gave Michigan State the lead, 13-7, and was the final play of a 10-play, 82-yard drive.

The Spartans' Le'Veon Bell rushed for 40 yards in the quarter to put him over 100 yards for the game. Bell has 125 total yards on the ground so far today.

Michigan State will start the second half with the ball.

Brock Vereen picks off Andrew Maxwell near the goal line:

FIRST QUARTER: Minnesota held Michigan State to nine yards through the air during the first quarter and the Golden Gophers lead 7-6 at the end of the first quarter. The Spartans' Dan Conroy made two field goals in the quarter.

Michigan State struck first when Conroy kicked a 48-yard field goal, the final play of a four-play, three-yard drive. An interception by Johnny Adams put the Spartans at Minnesota's 34-yard line to open the drive.

The Golden Gophers made the score 7-3 when Aaron Hill intercepted Andrew Maxwell's pass and returned it for a touchdown.

Michigan State made the score 7-6 after Conroy kicked a 44-yard field goal to finish off a 52-yard drive. The Spartans went to the air just one time on that drive.

Minnesota has the ball on its own 37-yard line to begin the second quarter.

Player on the spot: Minnesota QB Philip Nelson. The true freshman has had his moments but has struggled of late, failing to hit half his passes in each of the last three games. He completed just 8-of-23 passes for 59 with two interceptions last week in a loss at Nebraska. Nelson hit just 9-of-15 attempts for 78 yards in a win at Illinois before that. He?ll need to be more consistent vs. a Michigan State defense that ranks No. 1 in the Big Ten (289.4 ypg).

Key matchup: Michigan State RB Le?Veon Bell vs. Minnesota front seven. The Gophers are just No. 8 in the Big Ten in rush defense (164.8 ypg). Tackle Ra?Shede Hageman must be stout. The unit will have its hands full vs. Bell, who is No. 2 in the league in rushing with 1,382 yards and a national-high 315 carries. If Minnesota lets Bell run wild and wear it down, it will have a tough time winning.

Key number: On defense, Minnesota has allowed 261 points this year. With a strong defensive showing against Michigan State on Saturday and in the bowl game, the Gophers have a chance to keep their opponents from scoring a combined 300 points this year. The last time that happened was the 2004 season.