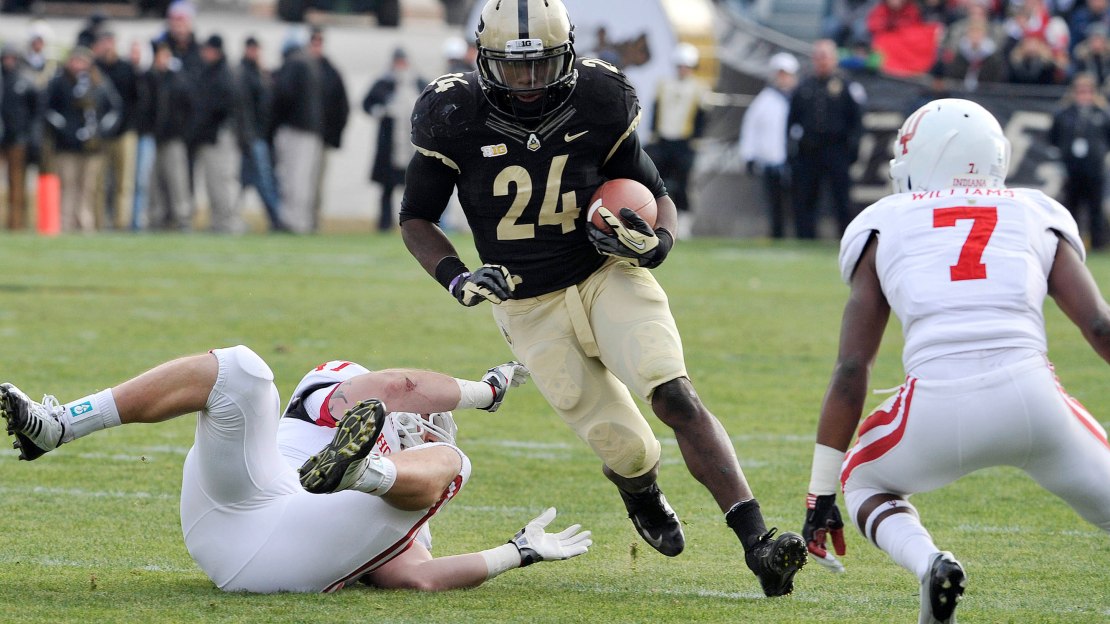 Akeem Shavers broke open a close game with three scores during a 4½-minute span in the fourth quarter, giving Purdue a 56-35 victory over archrival Indiana on Saturday. Robert Marve threw for a career-high 348 yards and four touchdowns in his final home game – a win that made the Boilermakers (6-6, 3-5 Big Ten) bowl eligible for the second straight year, the first time that has happened since 2006-07.

By retaining the Old Oaken Bucket, coach Danny Hope also can make a stronger case to keep his job. Indiana (4-8, 2-6) has now lost nine of the last 11 in this series.

FINAL: Stephen Houston's 157 rushing yards and three touchdowns weren't enough to lead Indiana to victory, as the Hoosiers fell 56-35 to Purdue on Saturday at Ross-Ade Stadium. Akeem Shavers proved to be the Boilermakers' most lethal weapon on offense. He was targeted to the tune of two receptions, 99 yards and two touchdowns.

Defense was an afterthought, as both teams lit up the scoreboard. Both teams provided fireworks on offense, as they gained 1071 yards in total.

Purdue didn't capture the lead until the fourth quarter. With 10:40 to go, Robert Marve and Shavers combined for a 73-yard touchdown to give the Boilermakers a 42-35 lead.

Marve threw for 348 yards while completing 20 of 29 passes for Purdue. Marve finished the game with four touchdowns and one interception. Antavian Edison was a key target for Marve. He caught five passes for 50 yards and one touchdown.

The Boilermakers' offense finished the game having gained 559 yards, including 373 passing yards on 21 completions. Purdue also moved the ball on the ground, earning 186 yards on 38 attempts.

Indiana's Cameron Coffman was good for 347 yards during the game, completing 31 of 53 passes. Coffman finished the game with one touchdown and three interceptions. Coffman's favorite target on the day was Houston. He hauled in 12 catches for 94 yards.

The Hoosiers' offense finished the game having gained 512 yards. In addition to Coffman's efforts through the air, Indiana also rushed 35 times for 165 yards.

THIRD QUARTER: Four long plays, including Robert Marve's 31-yard pass, helped spur Purdue's offense to 21 points and the Boilermakers have taken the lead 35-28. Purdue threw for 156 yards during the quarter. The Boilermakers got even after Marve and O.J. Ross combined for a 19-yard touchdown to end a four-play, 58-yard drive that tied the score at 21.

Purdue broke the 21-21 standstill when Rob Henry turned a quarterback sneak into a one-yard touchdown run to finish off a two-play, 59-yard scoring drive. The Boilermakers' drive was highlighted by Marve's 58-yard pass to Crosby Wright.

Purdue opened up the lead, 35-21, after marching down the field for a three-play, 48-yard drive that ended when Henry threw a 25-yard touchdown pass to Gary Bush. The Boilermakers started in good field position when Purdue recovered a fumble.

Indiana put a bow on a 71-yard drive when Cameron Coffman kept it himself for a one-yard touchdown run to make the score 35-28. The Hoosiers' drive was keyed by Coffman's 46-yard pass.

The Boilermakers' Marve hit 200 yards passing for the game in the quarter, part of his 212-yard passing performance thus far.

Indiana's Coffman reached the 200-yard passing mark for the game thanks to 115 in the quarter, and currently sits with 256 yards in all.

The Hoosiers have the ball at their own 43-yard line to begin the fourth quarter.

SECOND QUARTER: Indiana scored 14 points in the quarter, and the Hoosiers have taken the lead 21-14. Indiana finished with 120 yards through the air and 70 on the ground in the quarter. The Hoosiers' defense shut down Purdue's aerial attack in the quarter, holding the Boilermakers to zero passing yards.

Indiana tied the game at 14 after Stephen Houston ran eight yards to paydirt to end a four-play, 66-yard drive. The Hoosiers' drive was keyed by Cameron Coffman's 52-yard pass to Shane Wynn.

Indiana broke the 14-14 deadlock when Houston turned a handoff into a one-yard touchdown to finish off a five-play, 16-yard scoring drive. The Hoosiers began the drive with good field position after Greg Heban intercepted a Robert Marve pass.

Indiana's Houston reached the 100-yard rushing mark for the game thanks to 70 in the quarter, and currently sits with 124 yards in all.

The Hoosiers will start the second half with the ball.

Stephen Houston runs it in for TD No. 2:

FIRST QUARTER: The offense led Purdue to 14 first-quarter points, and the Boilermakers lead 14-7 at the end of the first quarter. Purdue executed a balanced offensive attack in the quarter, finishing with 81 yards passing and 75 yards rushing. The Boilermakers have scored 14 unanswered points.

After Indiana jumped out to a 7-0 lead on a Stephen Houston 51-yard touchdown tote, Purdue tied the game after Brandon Cottom ran 14 yards to paydirt to end an 11-play, 77-yard drive.

Purdue has possession at its own 48-yard line to start the second quarter.

Stephen Houston takes it 51 yards to the house: