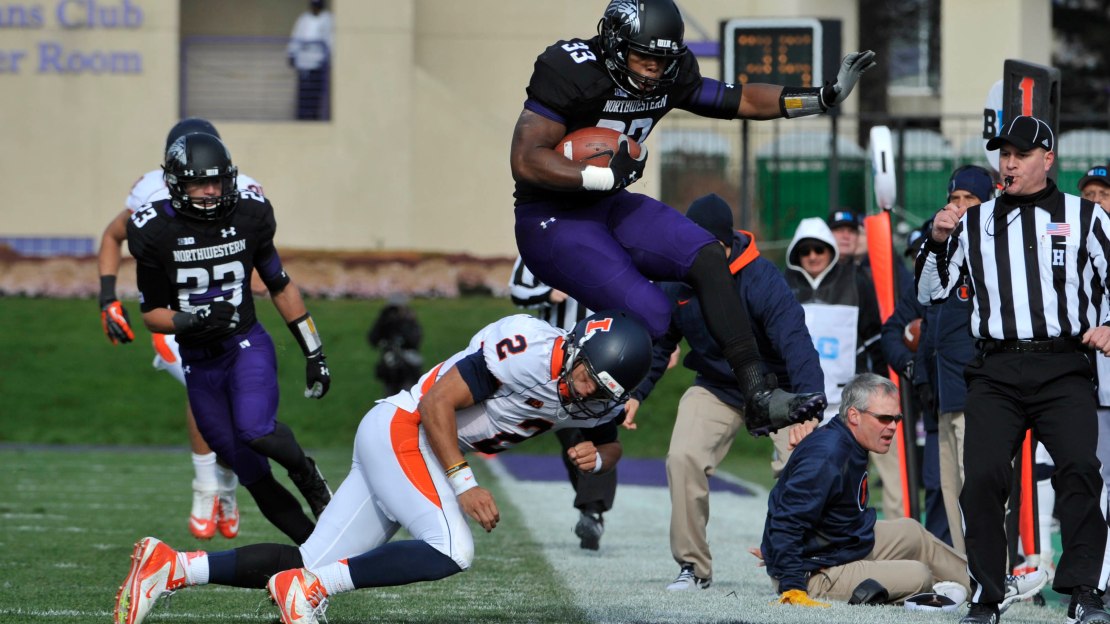 Venric Mark rushed for 127 yards and a touchdown as Northwestern improved its chances for a berth in a New Year's Day bowl game, beating Illinois 50-14 on Saturday. Northwestern quarterback Kain Colter threw for a career-high three touchdowns and the Wildcats (9-3, 5-3 Big Ten) reached nine victories for the first time since 2008.

Penalties and turnovers hurt Illinois (2-10, 0-8), which has lost nine straight and 14 in a row in Big Ten play. The Illini committed four turnovers – including three interceptions – and eight penalties in their season finale.

Northwestern captured the Land of Lincoln Trophy after losing to the Illini in the rivalry game the last two seasons.

Donovonn Young rushed for 74 yards and a touchdown for Illinois, which ranks last in the Big Ten in scoring offense in coach Tim Beckman's first season. Nathan Scheelhaase went 9 for 14 for 91 yards and two interceptions.

FINAL: Kain Colter threw for 102 yards and three touchdowns and rushed for 86 yards and one touchdown, leading Northwestern to a 50-14 victory over Illinois on Saturday at Ryan Field. The Fighting Illini were hard pressed to slow the Wildcats' ball carriers. Northwestern ran roughshod over Illinois, racking up 336 yards on the ground.

Venric Mark was the lead back for the Wildcats, as he rushed for 121 yards on 17 attempts.

Donovonn Young did his best to carry the Fighting Illini's offense, turning 11 carries into 74 rushing yards and one touchdown.

THIRD QUARTER: Northwestern put up 21 points in the third, and it now leads Illinois, 48-14. The Wildcats racked up 84 passing yards and 65 rushing yards in the quarter and have scored 31 straight points.

Northwestern opened up the lead, 34-14, after Kain Colter and Tyris Jones combined for a 15-yard touchdown to end an 11-play, 75-yard drive. The Wildcats threw just two times during that march downfield.

Northwestern expanded its lead to 41-14 thanks to a one-play, 24-yard drive that ended when Colter found Paul Jorgensen open for a 24-yard touchdown pass. The Wildcats began the drive with good field position after Ibraheim Campbell intercepted a Nathan Scheelhaase pass.

Northwestern made its lead 48-14 when Mike Trumpy turned a handoff into a three-yard touchdown on the last play of a seven-play, 50-yard drive.

Venric Mark clinched a 100-yard rushing game with 33 in the quarter, part of his 121-yard day through three quarters for the Wildcats.

Illinois will start the fourth quarter with possession on its own 39-yard line.

SECOND QUARTER: Thanks to a mean rushing attack, Northwestern now leads 27-14. The Wildcats rushed for 130 yards in the quarter, and Illinois has given up 10 straight points. The Wildcats made their lead 17-7 when Kain Colter and Tony Jones hooked up for a nine-yard touchdown on the last play of a two-play, 12-yard drive.

The Fighting Illini made the score 17-14 after Reilly O'Toole kept it himself for a 12-yard touchdown run to finish off a 60-yard drive. Illinois ran the ball on five of seven plays on that drive, almost ignoring the passing game completely.

Northwestern added to its advantage when Venric Mark pounded in a three-yard touchdown run, capping off an 11-play, 79-yard drive to give the Wildcats the lead, 24-14. Northwestern looked exclusively to the run game on that possession.

The Wildcats opened up the lead, 27-14, after marching down the field for a 12-play, 36-yard drive that ended when Jeff Budzien kicked a 36-yard field goal.

Northwestern is set to receive to start the second half.

The Fighting Illini took the game's first lead after Donovonn Young turned a handoff into a 15-yard touchdown on the last play of an 11-play, 78-yard drive.

Northwestern polished off a 15-yard drive when Jeff Budzien kicked a 44-yard field goal to make the score 7-3. Tony Jones' big kickoff return put the Wildcats at the Illinois 42-yard line to open the drive. Four of Northwestern's six plays during that series were passing plays.

Colter's two-yard touchdown run gave the Wildcats the lead 10-7 after a two-play, 19-yard drive. A fumble recovery by Northwestern set the Wildcats up to start the drive.

Kain Colter runs it for 6: