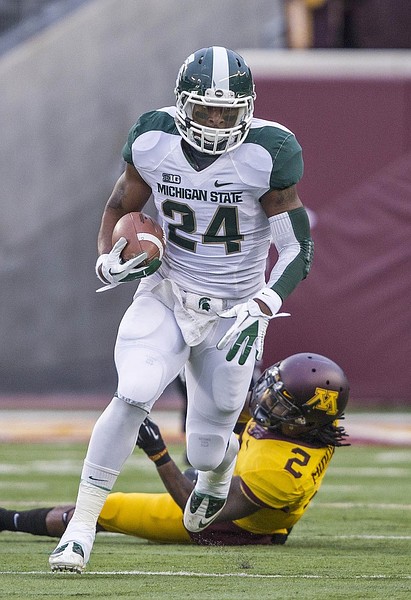 As BTN.com senior writer Tom Dienhart has done throughout the season, he offered his immediate thoughts to Saturday's season finales. Get Dienhart's Snap Reactions to Penn State's emotional overtime win over Wisconsin and Michigan State's victory at Minnesota in this post.

Penn State 24, Wisconsin 21 OT
1. Wearing the No. 42 on their helmet in honor of injured linebacker Michael Mauti, the Nittany Lions punctuated a surprisingly successful eight-win season with a gutty overtime win over Wisconsin. The Nittany Lions used a balanced offense, passing for 200 yards and running for 163. Just think if Penn State had not opened the season with losses to Ohio (24-14) and Virginia (17-16).

2. Zach Zwinak was a beast in running 36 times for 179 yards and a touchdown. The performance put him at exactly 1,000 rushing yards for the season. It also was his fourth 100-yard game in a row, and sixth of the season. And Zwinak had 94 yards in another game. It has been an incredible rise to prominence for Zwinak at a position that was a big concern prior to the season.

3. The Badgers will head to the Big Ten title game having lost three of their last four games. A bright spot: Montee Ball set the NCAA record for career touchdowns (79), running 27 times for 111 yards with a score. Quarterback Curt Phillips is still getting acclimated, hitting only 12-of-25 passes for 191 yards with two scores and an interception. He looked good completing a game-tying touchdown pass on fourth down in the waning moments. A chance to advance to a third Rose Bowl looms with a win over Nebraska in the Big Ten title game.

Michigan State 26, Minnesota 10
1. The season began with Big Ten title dreams but ended with the Spartans scrambling to become bowl eligible, which happened today with a tough win at Minnesota. That?s six seasons of bowl eligibility in a row for Michigan State. But that trip to the Rose Bowl continues to be elusive.

2. Le?Veon Bell has been Michigan State?s workhorse all season. Why should it end now? The junior ran 35 times for 266 yards and a touchdown, literally and figuratively carrying MSU to victory. The Spartans notched 421 yards, with 278 coming on the ground. Take a bow, Le?Veon.

3. Minnesota?s offensive struggles down the stretch continued. On this day, the Golden Gophers managed just 96 yards. And 92 of those came through the air, with just four on the ground on 19 carries. The learning process continues for true freshman quarterback Philip Nelson, who hit just 10-of-23 passes for 61 yards and three interceptions.