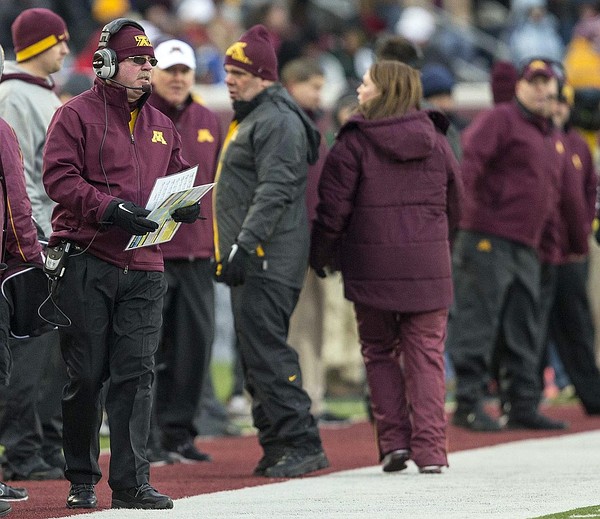 (AP) Minnesota coach Jerry Kill had another seizure, keeping him off sideline for the second half against Michigan State on Saturday.

Kill's latest episode occurred in the locker room at halftime as the team was returning to the field, the third such game-day occurrence in his second season at the school. This time, he didn't need to be hospitalized, however.

Kill had a seizure near the end of a loss to New Mexico State last season and was away from the team for several days while doctors tried to bring his condition under better control, though he didn't miss any games. This year, he was sent to the hospital for observation after the Gophers were beaten by Northwestern on Oct. 13. After Minnesota fell 26-10 to Michigan State, athletic director Norwood Teague said Kill was comfortable and all of his vital signs were fine. Kill was cleared to go home after resting for a few hours.

"I know this will bring up questions about him and moving forward, but we have 100 percent confidence in Jerry," Teague said, adding: "He's as healthy as a horse, as they say. It's just an epileptic situation … that he deals with. He has to continue to monitor all the simple things in life that we all have to monitor, in that you watch your diet, watch your weight, watch your rest, watch your stress."

Defensive coordinator Tracy Claeys took over the team in the second half from the press box, but the players – now accustomed to Kill's condition – brushed off any notion of a distraction.

"To be real with you guys, I didn't even think about it," defensive end D.L. Wilhite said. "Whether Coach Kill was out there or not, our jobs didn't change."

Wide receiver MarQueis Gray said he "had no idea" Kill wasn't on the sideline at first until he figured out an assistant coach was giving the pep talks.

"Of course we worry, but at the same time we know what he wants," cornerback Michael Carter said. "He wants to win."

Claeys has been with Kill, like most of the assistants on staff, for decades. Their experience with the boss's health problem goes beyond Minnesota. Kill also had game-day seizures at Southern Illinois.

"You just move on. It's very organized. It's very structured. So when something like this happens, everybody knows their job and what to do, and I'm telling you there's no panic in the staff or the kids or anything," Claeys said.

Teague acknowledged the perception that Kill's health is a persistent concern for him and the program, but he insisted he's confident in the coach's ability to manage his condition.

"You don't to downplay it, but you get to the point of realizing that it's just something he has to deal with at times," Teague said. "You don't want to say it's not a big deal, but in a way it's easy to deal with, in a lot of ways."