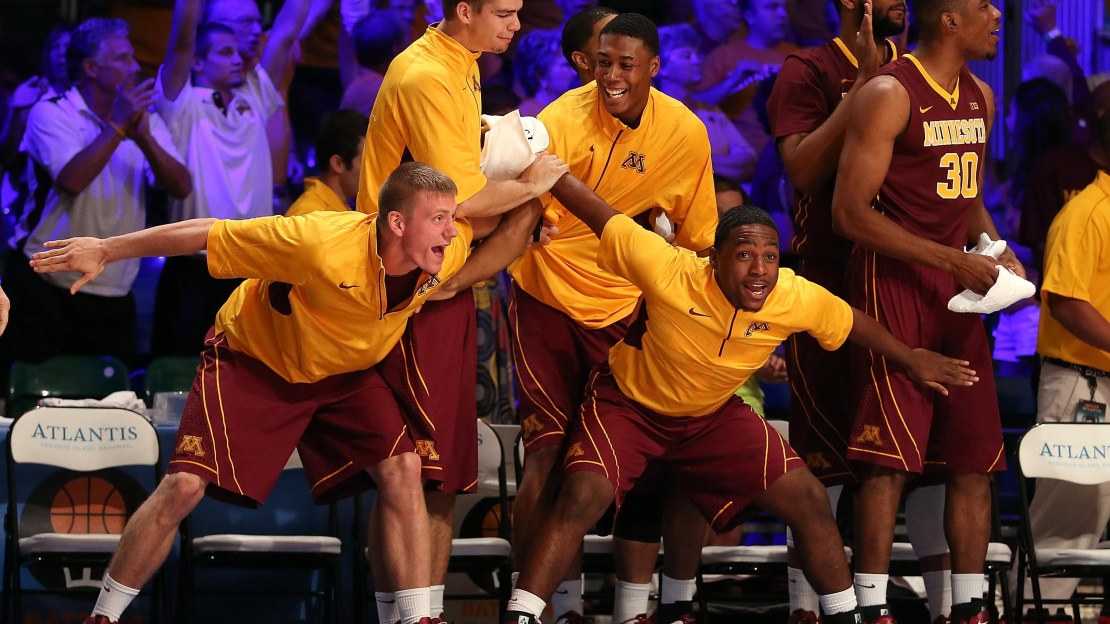 It wasn't just a Saturday full of Big Ten football. Four Big Ten men's hoops teams were in action, as well. Minnesota and Wisconsin beat Stanford and Arkansas, respectively, with the former's coming in overtime. Catch up on all the ction and stats in this post, plus get in-game updates.

FINAL: Minnesota needed one final shot by Andre Hollins to drop before it pulled out a 66-63 victory over Stanford on Saturday at Imperial Arena at Atlantis Resort in Nassau in the Battle four Atlantis. Stanford (3-3) struggled shooting the ball in the game, shooting 37 percent (21-of-57) from the field. Trevor Mbakwe sparked Minnesota (5-1), as he scored 19 points and went 7-of-9 from the field in the victory. The Golden Gophers went 26-of-35 from the charity stripe as a team (74 percent). More Minnesota scoring came from Rodney Williams Jr., who scored 12.

HALFTIME:  Balance can still tilt either way as Stanford and Minnesota go into the second half at 32-32 with six lead swaps already. The Cardinal led 19-12 when they went the next 1:14 without scoring to allow the Golden Gophers to tie the game 19-19 with a 7-0 run with 9:57 to go in the first half. Seven Stanford players scored in the first half. Nine Minnesota players have scored. Chasson Randle is putting together a nice game so far for Stanford. The sophomore has eight points. Minnesota's Trevor Mbakwe already has six points.

HALFTIME: Dylan Talley scored 17 points and Brandon Ubel added 11, on a perfect 4-for-4 from the field, as Nebraska leads Kent State 33-32 at the half. Both teams took turns controlling the momentum as there were seven lead changes. Nebraska has the lead at halftime due in large part to its ability to get to the foul line. The Cornhuskers made 14 of 14 free throws. Darren Goodson is putting together a nice game so far for the Golden Flashes. The junior has 10 points.

Brandon Ubel throws it down:

HALFTIME: Illinois State leads 26-23 over Northwestern at the half thanks to the play of Tyler Brown, who has nine points. The Wildcats led 7-5 when the Redbirds went on a 7-0 run to take a five-point lead. Drew Crawford led the way for the Wildcats in the first half, with 10 points. The Redbirds fired often and fired with accuracy from distance, hitting 42 percent (5-of-12) of their three-point attempts.

FINAL: Sam Dekker went 7-of-13 from the field and led five Wisconsin players in double digits with 19 points as the Badgers defeated Arkansas 77-70 on Saturday at Orleans Arena in Las Vegas in the Las Vegas Invitational. No. 24 Wisconsin also got double-digit contributions from Jared Berggren, who scored 10, Ryan Evans, who scored 12, and Traevon Jackson and Mike Bruesewitz, who each scored 11. Wisconsin (4-1) was hot from long range, hitting 8-of-19 threes for a 42 percent night from beyond the arc. The Badgers shot 25-of-38 from the free throw line.