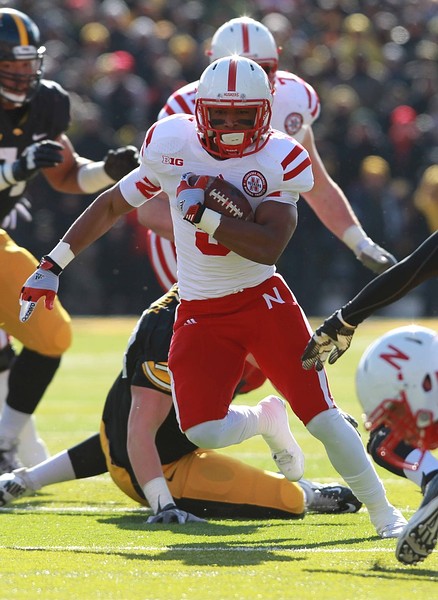 Playing in cold and windy conditions in Iowa City, Nebraska held on to beat Iowa 13-7 to clinch at least a share of the Legends Division and a berth in next Saturday's Big Ten Championship against Wisconsin. Neither team scored in the fourth quarter but a late interception sealed it for the Huskers.

FIRST QUARTER: James Vandenberg led Iowa in the quarter. He threw for 25 yards and ran for four yards and one touchdown, and the Hawkeyes lead 7-3 at the end of the first quarter.

No. 14 Nebraska took the game's first lead after Brett Maher kicked a 26-yard field goal on the last play of a 16-play, 75-yard drive. The Cornhuskers threw just one time on that possession.

Vandenberg's one-yard touchdown run gave Iowa the lead, 7-3, and was the final play of a 12-play, 62-yard drive. The Hawkeyes threw just one time on that drive. Nebraska will start the second quart er with possession at its own 32-yard line.

SECOND QUARTER: The second quarter saw both teams combine for no points and two turnovers and the margin is still four, as Iowa leads 7-3. The Hawkeyes will receive to start the second half.  Nebraska quarterback Taylor Martinez completed five passes in the first half. He now has 470 career completions and has tied the NU school record of Zac Taylor.

THIRD QUARTER: Rex Burkhead had a productive quarter for Nebraska. He ran for 28 yards and one touchdown, and the Cornhuskers have taken the lead 13-7. Nebraska has erupted for 10 straight points.

A 30-yard drive that ended when Brett Maher drilled a 52-yard field goal helped the Cornhuskers narrow the deficit to 7-6. Nebraska ran the ball on seven of 10 plays on that drive, almost ignoring the passing game completely.

Burkhead's three-yard touchdown run finished off a four-play, 43-yard drive and gave the Cornhuskers the lead, 13-7. Nebraska began the drive with good field position after the Cornhuskers returned a punt.

Iowa has possession at its own 47-yard line to start the fourth quarter.

FOURTH QUARTER: The fourth quarter saw both teams combine for no points and one turnover and Nebraska kept Iowa at bay for a 13-7 victory. James Vandenberg's late pass was intercepted by Alonzo Whaley.

With a strong win at his back, James Vandenberg pass completed to C.J. Fiedorowicz for 25 yards for a 1st down at Nebraska's 25.

Vandenberg rushes over right end for the first Touchdown of the game.

Nebraska's Daimion Stafford picks off a pass in the second half.

Iowa's punt get a little help from the wind.