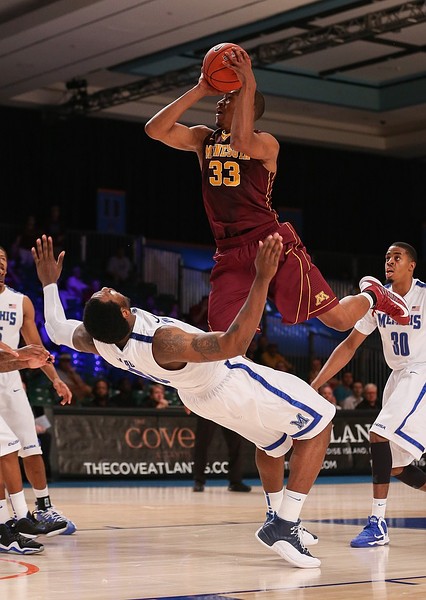 Andre Hollins scored 41 points to lift Minnesota to an 84-75 upset win over No. 17 Memphis on Friday at Imperial Arena at Atlantis Resort in Nassau in the Battle four Atlantis.

Minnesota (5-1) got solid performances from both Hollins and Rodney Williams Jr. Hollins made 12-of-16 shots from the floor and made 5-of-5 three-pointers. Williams Jr. scored 13 points, yanked down seven rebounds, dished out three assists, and shot 4-of-7 from the field.

D.J. Stephens had 15 points, grabbed six rebounds, and went 5-of-6 from the field for Memphis (2-2) in the game. The Tigers were tough on the offensive boards, grabbing 15. Memphis also got double-digit efforts from Tarik Black, who scored 13 and Adonis Thomas and Shaq Goodwin, who each scored 12.

Down 38-37 with 2:41 left in the first half, Minnesota broke out for a 10-2 run to take a seven-point lead late in the first. Hollins finished the run off with a free throw, which helped Minnesota lead 47-42 at halftime. The victory extends the Golden Gophers' winning streak to five games.

HALFTIME: Andre Hollins scored 24 points for Minnesota in the first half to carry the Golden Gophers to a 47-42 lead over No. 17 Memphis. Each team took a turn in the driver's seat as the lead changed hands seven times.

Through 20 minutes of action, a major weapon for the Tigers has been shut down, as Minnesota has kept Joe Jackson in check. Sitting with two points, the junior is far below his 13.5 per game average this year. Eight Memphis players scored in the first half.

The Golden Gophers applied the pressure in the first half, earning second-chance opportunities with six offensive rebounds, to just three for Memphis. Minnesota shared the ball, finishing with 11 assists on 17 field goals in the first half. Eight Minnesota players scored in the half.