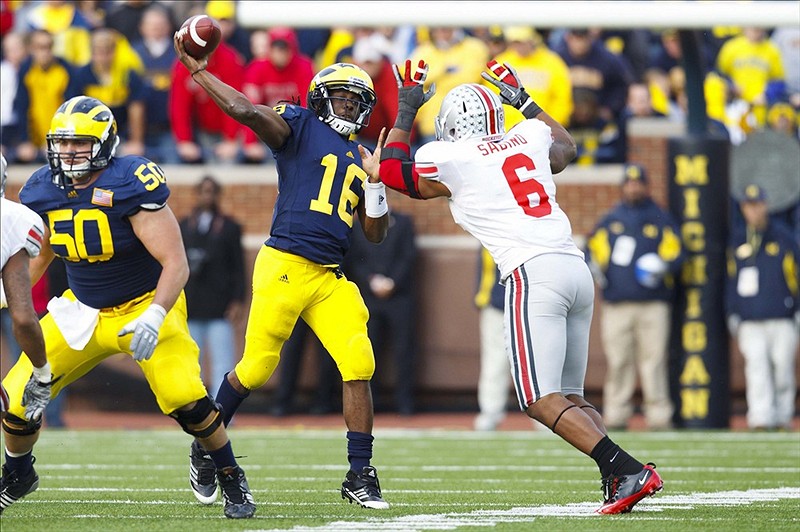 Stop. Lift your head and look around. Take a moment to drink in what we are about to witness. This will be the first meeting between Ohio State coach Urban Meyer and Michigan coach Brady Hoke. And it?s the beginning of what I think will be a golden age for this All-American rivalry.

"If you need anything to get amped up more for this football game, then you don't know college football and you don't understand the importance of this great rivalry," said Hoke.

Look at what the two coaches have done in a short period of time. Hoke led the Wolverines to an 11-2 mark in his debut last season, capping it with a Sugar Bowl triumph. In Meyer's maiden voyage in Columbus, he has the Buckeyes on the precipice of the program?s sixth unbeaten season. This will be the 12th time Ohio State has taken a perfect record into the Michigan game, boasting an 8-3-1 record.

And if you believe recruiting rankings, each coach is stock piling talent that exceeds the rosters compiled by their other ten Big Ten brethren.

Bottom line: Michigan and Ohio State may be priming the pump for an extended run of dominance not see by the Big Ten since the two schools ran roughshod over the league in the 1970s, an era known when the conference was known as the ?big two and little eight.?
And it?s because of Brady and Urban.

Hayes, too. The names are iconic and drip with power and prestige across the Midwest. No need for explanations–or last names. Bo and Woody embody schools and a region known for three-yards-and-a-cloud-of-dust sensibility.

The rivalry between the Midwestern monoliths never burned hotter than from 1969-78, an era known aptly as the ?Ten Year War.? That was the only ten-year period that Bo and Woody went head-to-head, as the rivalry ended abruptly after the 1978 season when Hayes was fired after slugging Clemson?s Charlie Bauman into infamy in the Gator Bowl.

Ohio State and Michigan has raged on since that white-hot ten-year run, with bursts of glory here and there. Some of the more memorable moments.

"There always is more of a buzz this week,? said Hoke. ?This is the 109th time we've faced each other, the rivalry, the excitement that follows with it, the passion people have – I think it spills over."

GRID BITS: Michigan hasn?t won at Ohio State since 2000. ? Wisconsin has lost four games by an average margin of four points. ? Ohio State?s defense has yielded only five touchdowns in the past 13 quarters. ? The Buckeyes? 11-0 start is their best since the 2006 team went 12-0 in the regular season and then got smashed by Florida and Urban Meyer in the BCS championship game. ? Last week, Michigan State RB Le?Veon Bell moved into seventh place on the school?s all-time rushing list with 2,935 yards. He needs 65 yards in the finale at Minnesota to become just the seventh back in MSU history to reach the 3,000-yard career milestone. ? Ameer Abdullah?s 1,000-yard season gives Nebraska a 1,000-yard rusher for the third straight season and for the 32nd time in school history. ? Braxton Miller needs one more game with 300 yards of total offense to set a school season record. Miller is tied with Joe Germaine with five games of 300 or more yards of offense. ? Iowa has lost five games in a row for the first time since the 2000 team opened with five consecutive losses after ending 1999 with eight losses in succession ? In the last 90 minutes, Purdue has committed 18 penalties. It had 10 in the second half at Iowa and got whistled for eight against Illinois. ? Ohio State RB Carlos Hyde has 666 yards rushing and has scored 14 touchdowns in his last six games. ? Penn State RB Zach Zwinak lost another fumble against Indiana and has now fumbled four times in the last six games. ? Matt McGloin has set Penn State single-season records for completions (251) and passing yards (3,071). He also is the Penn State leader in career touchdown passes with 45. ? LB Gerald Hodges has recorded 100 tackles for the second straight season and is just the sixth player in school annals to achieve the feat in multiple seasons. ? Montee Ball moved into a first-place tie with Travis Prentice of Miami of Ohio on the NCAA?s all-time touchdowns list. Ball has 78 career touchdowns. He passed Ron Dayne for the Big Ten and school record for rushing touchdowns in a career with his 72nd. Ball passed the 100-yard mark for the seventh time this season and now has 4,727 career rushing yards.