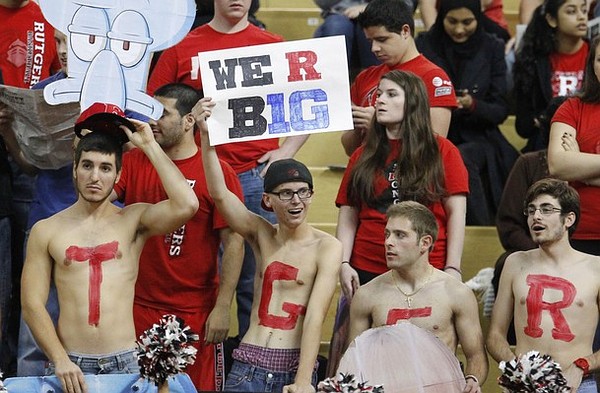 Two days, two new teams. It has been that kind of week for the Big Ten-an historic week, really. Maryland came aboard on Monday ? Rutgers took its turn yesterday, swelling the Big Ten ranks to 14 schools. I?m checking my emails every five minutes for the next press conference alert ? none yet. Stay tuned. See what the Big Ten?s leading pundits had to say about the monolithic conference?s newest bouncing bundle of joy-Rutgers-in my daily links.

Randy Peterson of the Des Moines Register thinks the expansion could provide wins and fertile recruiting grounds for Iowa. He?s right, of course.

No doubt, neither Maryland nor Rutgers has been consistently good on the field over the years. And each program sits in heavily populated areas which annually produces a lot of talent. But I think over time, the newcomers will become better-much better-because of Big Ten membership and all of its perks and resources.

"After the recent realignment when the ACC took Pittsburgh and Syracuse (and Boston College), the ACC appeared to be trying to consolidate the entire East Coast, and I don't think that would have been good for us," Perlman said to Steve Sipple of the Lincoln Journal Star.

So, in addition to entry into New York and mid-Atlantic cable markets, Rutgers and Maryland give the Big Ten geographic protection. But Perlman says he doesn?t anticipate more expansion in the ?immediate future,? but went on to say that ?you never know what external conditions will force us to do something else."

Lee Barfknecht of the Omaha World-Herald says 16 members in the Big Ten sounds sweet. Yes, he just went there with that.

Barfknecht says Big Ten Commissioner Jim Delany is a smart, powerful man who knows the era of four 16-team superconferences is coming sooner than any of us wanted to believe. He also doesn't like getting snookered.

So after seeing the Southeastern Conference and the Atlantic Coast Conference beat him to 14 members, don't look for it to happen to the Big Ten again on the way to 16.

Could the next expansion come soon? Heck, it might happen later this week with the way these things are now playing out in private.

From the great Loren Tate of the Champaign News-Gazette, expansion is all about the ?Benjamins.? (For the less hip out there, ?Benjamins? are $100 bills-or just money, in general.) Do the math, people. Oh, and bring a calculator. You?ll need it.

Looking for a pre-Thanksgiving laugh? Check this out. Ohio State fans petitioning the President of the United States for a pardon?! I?m speechless. Pass the gravy.

Still troubled by Bill O?Brien not being direct about his future at Penn State? Don?t be, says David Jones of the Harrisburg Patriot-News.

Jones says coaches are task-oriented creatures who take on huge tracts of preparation and responsibility. They must think like a foreman of a large construction job or a logistical manager of a big trucking firm. That means you take care of matters in sequence when they need to be addressed and not before. Do not plan or model any action until all the factors are available. Only the tasks that must be performed are performed.

So, there you go.

Braxton Miller?s Heisman hopes are real. In fact, they may be riding on how he performs vs. Michigan.

Doug Lesmerises of the Cleveland Plain Dealer points out that last year in his debut in The Game, Miller completed 14 of 25 passes for 235 yards, with two touchdowns and one interception. He also ran 16 times for 100 yards a score. But Miller is coming off his worst effort of the season with just 145 yards of total offense in a 21-14 overtime win at Wisconsin. What?s it all mean? I?m not sure. But I?ll be there to watch. Oh, and I have a Heisman vote. Knock my socks off, Braxton.

The Wisconsin defense hasn?t gotten the credit it deserves all season. It may have been at its best last week, when it contained Ohio State?s Braxton Miller like no other defense has this season. The key: A flexible approach that has made the Badgers especially effective on third downs.

How did they slow down Miller? Tom Mulhern of the Wisconsin State Journal says the Badger defensive coaches came up with a two-pronged approach in which two players held their positions and the other two went after Miller.

"We had kind of a split mentality," co-defensive coordinator Charlie Partridge said. "You've got to have a couple guys that are pass rushing with everything they have and you have to have a couple other guys that are in position to work over them and then getting into essentially a moving set of lanes. We had to work that."

In addition, the coaches added new wrinkles to their third-down package, the one in which six players crowd the line of scrimmage in two-point stances. That's something the defense has done for several games, but this was a new version.
Just brilliant work.

#Huskers All-Big Ten candidates on defense? Papuchis said Eric Martin and Ciante Evans have played at that level, and perhaps Will Compton.

My take: I would agree. Each has been a cut-above all season for a defense that is finishing with a flourish.

Denard on bus ride to Ohio Stadium: "They're doing some things I don't want to talk about (laughs) They get a little rowdy down there."

My take: I bet the Partridge Family never had a bus ride like that.

#PennState QB coach Charlie Fisher said he was surprised to a degree that Matt McGloin did not receive more offers out of HS.

My take: Now look at McGloin: One of the greatest quarterbacks in Penn State history. Not bad for a former walk-on who no one wanted. I love stories like this.