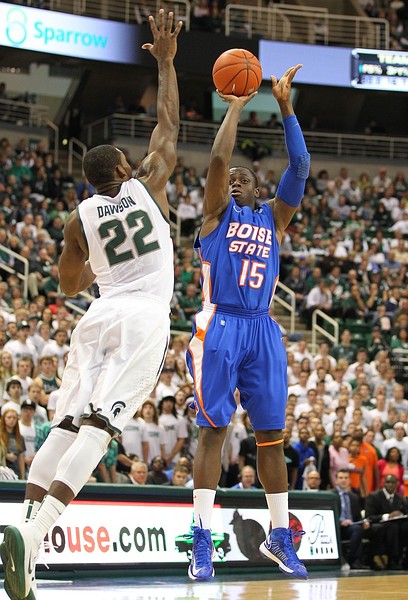 It was a busy day on the Big Ten men's hardwood Tuesday, as six teams were in action. No. 19 Michigan State got a scare from Boise State but held on for a 74-70 win at the Breslin Center. Track all of tonight's action, get live updates and watch in-game highlights in this post.

Use these links to enhance the game experience:

FINAL: Behind a solid offensive effort, Illinois defeated Chaminade 84-61 on Tuesday at Lahaina Civic Center in Lahaina in the Maui Invitational. Illinois (5-0) hit 49 percent of its field goals (29-of-59). The Fighting Illini were hot from long range, hitting 11-of-28 threes for a 39 percent night from beyond the arc. Joseph Bertrand sparked Illinois, as he contributed 14 points and knocked down 5-of-7 shot attempts in the win. Other Illinois scorers in double figures included Tyler Griffey, who scored 10, D.J. Richardson, who scored 11, and Brandon Paul, who scored 13.

HALFTIME: Illinois leads 37-21 over Chaminade at the half thanks to the play of Joseph Bertrand, who has eight points on 3-5 shooting. The Fighting Illini didn't trail once in the first half and they also led by as many as 18 points. Illinois was leading 27-19 when it used a 10-0 spurt to widen its advantage to an 18-point margin. Eight Illinois players scored in the first half.

FINAL: No. 1 Indiana outlasted Georgetown, 82-72, in overtime Tuesday night at Barclays Center in Brooklyn in the Legends Classic. Jordan Hulls and Cody Zeller led five Indiana players in double digits with 17 points in the victory. The Hoosiers (5-0) also got double-digit contributions from Yogi Ferrell (14 points), Victor Oladipo (12) and Christian Watford (10). The game was tied 64-64 before Indiana went on a 14-4 run to take a 10-point lead with 58 seconds left in overtime.

HALFTIME: No. 1 Indiana has a 36-32 lead over Georgetown at the half after dominating on the glass, outrebounding the Hoyas 15-8. The teams have traded the lead nine times in the first half. Indiana fired often and fired with accuracy from distance, hitting 60 percent (6-of-10) of their three-point attempts. The Hoosiers, who had seven players score in the first half, recorded 11 assists on 13 buckets. Victor Oladipo led the way for the Hoosiers in the first half, with nine points and four rebounds, while Cody Zeller added eight points. Georgetown's Markel Starks scored 11 points.

FINAL: Mike Gesell scored 19 points to lead Iowa to a 63-55 win over Western Kentucky on Tuesday at Moon Palace Resort in Cancun in the Cancun Challenge – Riviera Division. Iowa (5-0) shot 48 percent from the field (22-of-46) and got double-digit contributions from Roy Devyn Marble, who scored 10 and Eric May and Melsahn Basabe, who each scored 11. T.J. Price scored 16 points for Western Kentucky (2-2) in the loss.

HALFTIME: Mike Gesell has 10 points on 3-of-4 shooting to lead Iowa to a 30-22 lead over Western Kentucky at the end of the first half. The Hawkeyes led from the start and led by as many as 11 points. Trailing 20-16, the Hilltoppers went cold, going 2:34 without a point while Iowa went on a 7-0 run to open up an 11-point lead. Jamal Crook is putting together a nice game so far for the Hilltoppers, with seven points.

FINAL: In a game with several lead changes and momentum swings, No. 19 Michigan State prevailed over Boise State 74-70 on Tuesday at the Jack Breslin Student Events Center in East Lansing. There were nine lead changes in the game. Keith Appling sparked Michigan State (3-1), as he had 22 points, pulled down five rebounds, handed out six assists, and made 8-of-14 shots from the floor in the victory. Adreian Payne added 10 points for the Spartans. Derrick Marks scored 24 points for Boise State (3-1).

HALFTIME: No. 19 Michigan State trailed Boise State late in the first half before going on a 7-0 run to take a 38-32 lead into the break. The Broncos put the clamps on Michigan State's three-point game (4-of-12, 33 percent from long range), while the Spartans shot 73 percent in the first half on two-point field goals. Michigan State got points from seven different players, paced by Keith Appling (11 points) and Braden Dawson (8).

FINAL: Drew Crawford scored 18 points to lead Northwestern to a 69-50 victory over Delaware State on Tuesday at Welsh-Ryan Arena in Evanston. Crawford hit 7-of-10 shots, including 4-of-7 from downtown, and the Wildcats shot 52 percent from the field. Northwestern also got double-digit efforts from Dave Sobolewski (14) Reggie Hearn (12) and Alex Olah (10). Delaware State's Tahj Tate scored a game-high 23 points.

HALFTIME: Drew Crawford has 13 points to lead Northwestern to a 35-22 lead over Delaware State at the end of the first half. The Hornets went into a funk with the score 24-19, going 2:47 without a point while the Wildcats went on an 8-0 run to open up a 13-point lead. Northwestern hit seven threes in the first half, shooting 70 percent from deep. Dave Sobolewski chipped in eight points and Reggie Hearn added five.

Drew Crawford throws down in transition:

FINAL: No. 24 Wisconsin used its efficient offense to power past Presbyterian 88-43 on Tuesday at the Kohl Center in Madison. Wisconsin (3-1) shot 52 percent from the field (33-of-63), including 43 percent from deep (16-of-37). Wisconsin, which never trailed in the game, held Presbyterian (0-4) to 36 percent shooting from the field. Ben Brust scored 20 points and grabbed 12 rebounds for his third double-double in four games. Wisconsin also got double-digit efforts from Sam Dekker (16), George Marshall (12) and Frank Kaminsky (10).

HALFTIME: No. 24 Wisconsin held Presbyterian's offense to just seven first-half field goals, and the Badgers lead 39-15 at halftime. Wisconsin didn't trail once in the first half and it also led by as many as 25 points. Ben Brust, who owns a pair of double-doubles this season, scored 11 points and grabbed seven rebounds. Freshman Sam Dekker added nine points for the Badgers, who have had eight players score. Wisconsin shot 47 percent from the field but hit just 6-of-20 3-pointers.