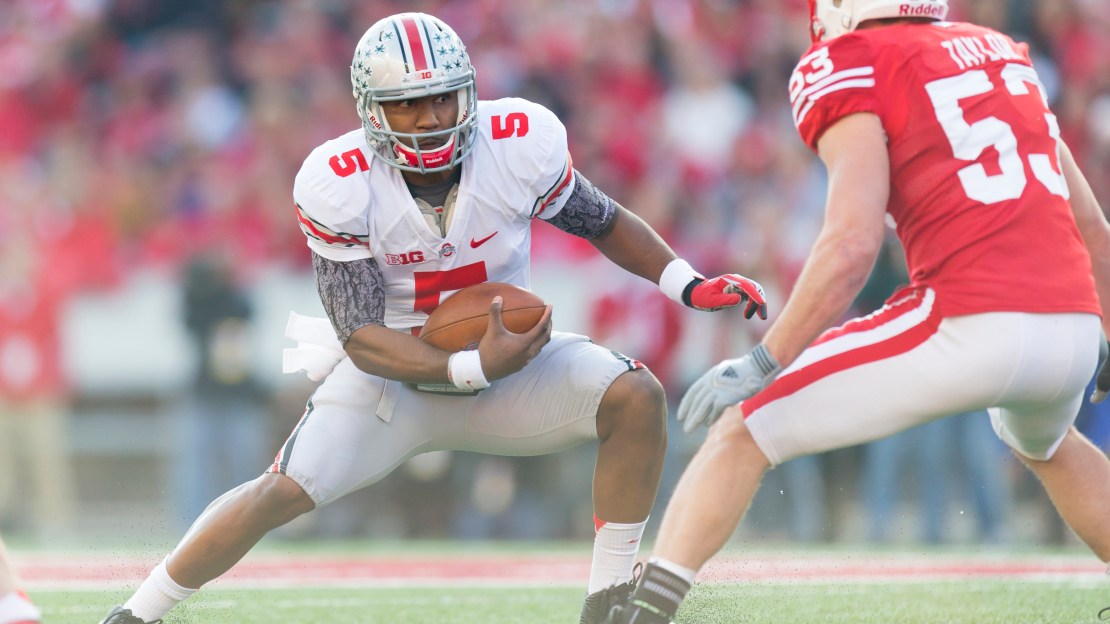 The Big Ten?s biggest beneficiary to the upsets last week is Ohio State quarterback Braxton Miller. And he can enhance his resume with a big effort in a win vs. Michigan on Saturday. Beat the Wolverines, and look good doing it, and Miller may at least guarantee a spot in New York for the Heisman ceremony.

Wisconsin?s Montee Ball also is in the conversation among Big Ten players with his fast finish to the season that has him leading the league in rushing and within one score of setting the NCAA career touchdown mark. Ball has 964 of his 1,417 yards rushing and 11 of his 17 touchdowns in the last six games. That comes out to an average of 160.7 yards rushing and almost two touchdowns over the past six games. Ball can impress with a big effort in a win at Penn State, which is No. 5 in the Big Ten in rush defense (125.7 ypg).

1. Braxton Miller, QB, Ohio State. He isn?t coming off a vintage effort, throwing for just 97 yards and running for only 48 as he largely was contained by Wisconsin. But Ohio State still escaped Madison with a 21-14 overtime victory, and Miller made a key run in the extra session to spark OSU to victory. The sophomore is third in the Big Ten in passing efficiency, hitting 57 percent of his attempts for 1,850 yards with 14 touchdowns and six interceptions. And Miller is fourth in the Big Ten in rushing (110.4 ypg) and has 13 rushing scores. But Miller?s best stat may be the Buckeyes? 11-0 record.

2. Montee Ball, RB, Wisconsin. He?s finishing his career with a flurry. After a slow start, Ball is now leading the Big Ten in rushing with 1,417 yards and a conference-high 17 rushing scores. Ball needs one more touchdown to set the NCAA career record. He has run for over 100 yards in five of the last six games with 198 and 191 in each of his last two. The man is on fire.

3. Taylor Martinez, QB, Nebraska. You have to hand it to the gutty junior, who has the Cornhuskers one win from clinching the Legends Division and advancing to the Big Ten title game. Martinez has become a more complete quarterback-and leader. The wins are impressive, just as his number are, too. Martinez is No. 1 in the Big Ten in passing efficiency, completing 64 percent of his attempts for 2,420 yards with 21 touchdowns and eight interceptions. He also is No. 11 in the conference in rushing (72.0 ypg) with eight touchdowns for a team that has won five in a row. Martinez could finish with a big effort at Iowa, which has the No. 9 defense in the Big Ten (392.4 ypg) and has lost five in succession.