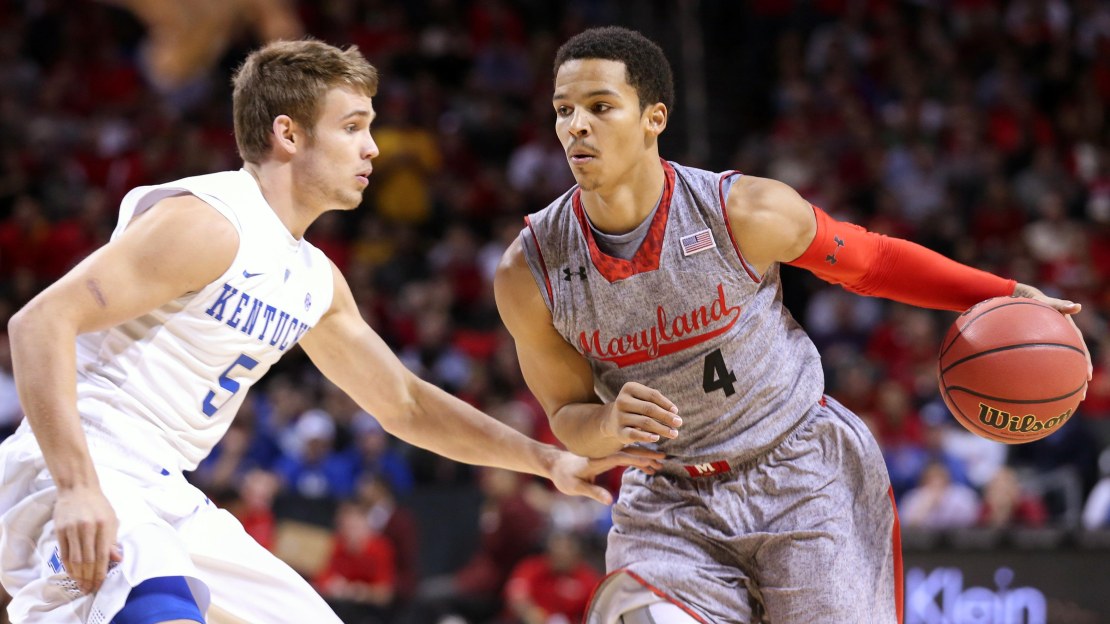 With the news that Maryland will be joining the Big Ten in 2014, there are all sorts of implications to evaluate. Maintaining our narrow perspective of Big Ten basketball, let's take a look at what the addition might mean strictly on the hardcourt.

Maryland has a proud basketball tradition, with the pinnacle coming in the form of the 2002 national championship squad led by Juan Dixon. Otherwise, Maryland has made only one other Final Four (2001) and hasn't reached the Sweet Sixteen since 2003. Even making the Big Dance has become a bit of a struggle for the Terrapins, who have missed five of the last eight NCAA tournaments.

Despite the recent struggles, this is a solid basketball program. If we look at average KenPom rank over the past 10 seasons, Maryland checks in at #24 in the nation, behind only Wisconsin, Michigan State, Illinois, and Ohio State among Big Ten teams.

Through this lens, Maryland looks like an outstanding addition that would clearly raise the average quality of basketball played in the conference. But, you might point out, 10 years is a long time in the college basketball landscape. After all, not many fans would pick Illinois' program over Ohio State's right now. How does this list change if we look at only the past five seasons?

Ah, that feels more appropriate. Over the past five seasons, Maryland would rank eighth in the Big Ten, just behind Michigan (how quickly Michigan's struggles have been forgotten). That's probably still good enough to improve the quality of play in the conference, but not by much.

What's missing from this analysis is the outlook for the future. How well is this basketball program positioned for the short and long term?

In Mark Turgeon's second season, Maryland is looking much improved from the team that finished 6-10 in the ACC a  year ago. The Terrapins hung with Kentucky in the season opener and have blown out a couple not-completely-terrible opponents. Their next real test comes, ironically, in a visit to Northwestern for the Big Ten-ACC Challenge.  Maryland's rotation includes just one senior and one junior, and a top 50 PG is lined up for 2013, so this could be a very good team when 2014-15 rolls around.

Beyond the scope of today's players, Maryland is positioned in some highly fertile recruiting ground. Courtesy of Statsheet, here's where top 100 recruits have come from since 1998 (Big Ten states in bold):

Among Big Ten schools, only the state of Illinois (i.e. Chicago) has produced more top 100 recruits than the state of Maryland. Over the past three classes, you have names like Josh Selby, Terrance Ross, Will Barton, and C.J. Fair coming out of the state. On a per capita basis, Maryland has a strong argument for being the most fertile basketball state in the union. Of course, it should be noted that not all of these blue chip recruits actually grew up in Maryland, as the presence of some highly regarded prep schools in the state skew the numbers. Still, under the right guidance, Maryland could again be a basketball powerhouse without having to recruit far from home, and Turgeon has seemingly gotten off to a good start.

(On a side note, the line below Maryland in the above table may prove relevant in the near future with Rutgers rumors flying, though the short answer on that New Jersey program is not nearly as positive in a pure basketball sense.)

In sum, despite some recent struggles, Maryland should prove to be a worthy addition to the nation's best basketball conference.