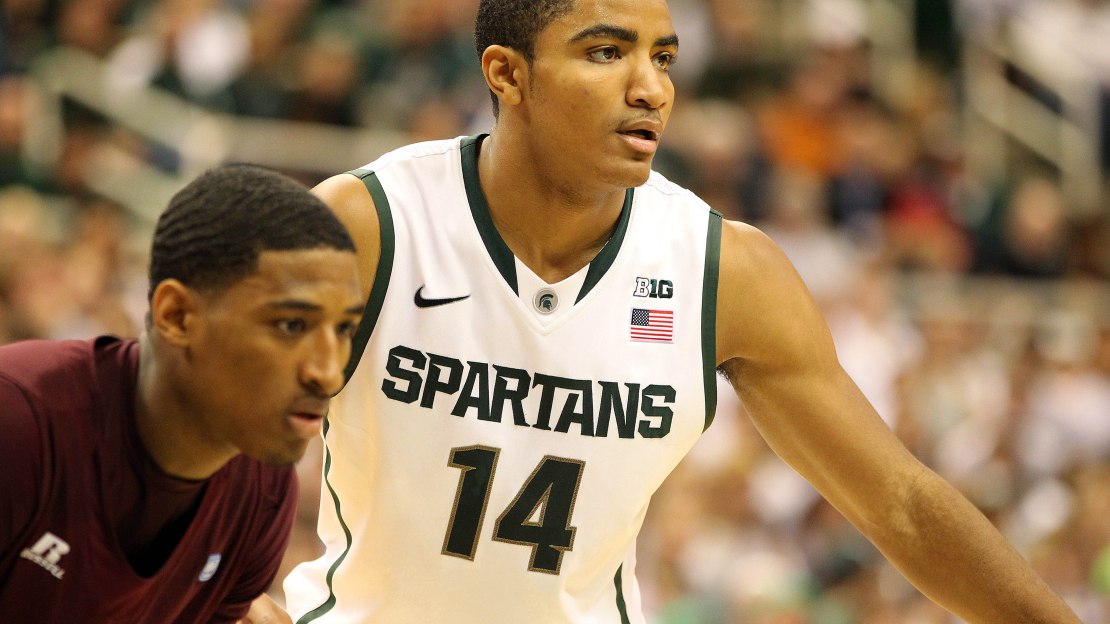 It was a busy day of Big Ten men's hoops Sunday. There was a total of seven games, including No. 4 Ohio State topping Washington and No. 20 Wisconsin getting revenge against Cornell. Catch up on all the day's action on our BTN.com scoreboard. Also, get stats, recaps and in-game highlights in this post.

FINAL: No. 22 Michigan State's defense shut down Texas Southern, as the Spartans defeated the Tigers 69-41 on Sunday at the Jack Breslin Student Events Center in East Lansing. Michigan State (2-1) held Texas Southern (1-3) to 21 percent shooting from the field. Gary Harris had a big performance for the Spartans, with 19 points and 7-of-10 shooting from the field. Michigan State hit 47 percent of its field goals (28-of-60). The Spartans also got a double-digit game from Branden Dawson, who scored 13. Fred Sturdivant scored 10 points and pulled down 12 rebounds for the Tigers in a losing effort.

HALFTIME: No. 22 Michigan State held Texas Southern to 22 percent from the field, helping it claim a 40-19 halftime advantage. Michigan State blew open the game with a 17-2 run to close the half. Gary Harris led eight Spartans scorers, with 14 points. Keith Appling, Michigan State's leading scorer, enters halftime with two points, well below his season average of 18. The Spartans have been effective inside, making 14-of-22 two-point field goals. Kyrie Sutton led the way for Texas Southern, with four points and seven rebounds.

FINAL: Derrick Williams scored 16 points, but it wasn't enough to lead Richmond past Minnesota, as Spiders fell 72-57 on Sunday at Williams Arena. Rodney Williams Jr. sparked Minnesota (4-0), as he scored 15 points and knocked down 6-of-10 shot attempts in the victory. The Golden Gophers hit 57 percent of their field goals (26-of-46) and also got double-digit games from Andre Hollins (14 points), Austin Hollins (13) and Joe Coleman (10).

HALFTIME: It is still anyone's game as Nebraska and Nebraska Omaha have passed the lead to each other seven times in the first half. At the moment, the Cornhuskers are on top 36-34. Trailing 25-22, Nebraska used a 7-0 run to take the advantage. Dylan Talley and Andre Almeida both have nine points to pace Nebraska, which has hit just 2-of-13 from 3-point land. Justin Simmons led the way for the Mavericks, with a game-high 12 points.

FINAL: Northwestern used a 38-9 second-half run to trounce Fairleigh Dickinson, 80-53, Sunday at Welsh-Ryan Arena. Reggie Hearn sparked the Wildcats (3-0), as he had 14 points and went 4-of-5 from the field in the win. The Wildcats shot 49 percent from the field (33-of-67) and also got a double-digit effort from Alex Olah (10). Northwestern, which led by as many as 37, never trailed in the game. The Wildcats won the free throw battle, shooting 69 percent (9-of-13) from the charity stripe, compared to 18 percent (2-of-11) for the Knights.

HALFTIME: There were no free points for Fairleigh Dickinson, as Northwestern clamped down defensively to hold the Knights to 21 percent shooting in the first half and has a 41-14 lead going into the break. The Wildcats, who have never trailed and led by as many as 27 points, closed the half on a 33-9 run. The Wildcats made 13 of 20 two-point shots, but only hit 3-of-13 from deep. Northwestern got points from seven different players, paced by Reggie Hearn's 14 points.

FINAL: Deshaun Thomas scored 31 points, grabbed nine rebounds and handed out three assists as No. 4 Ohio State defeated Washington 77-66 on Sunday at Mohegan Sun Arena in Uncasville in the Hall of Fame Tip-Off Naismith. Both Thomas and Aaron Craft played well for Ohio State (3-0). Thomas made 12-of-21 shots from the floor, while Craft had 18 points and contributed eight assists. Evan Ravenel shot 4-of-5 from the field and scored 12 points for the Buckeyes. Ohio State hit 47 percent of its field goals (27-of-57). The Buckeyes crashed the offensive glass effectively, grabbing 12 offensive boards.

HALFTIME: Deshaun Thomas shot 9-of-12 and scored 21 points to push No. 4 Ohio State to a 41-31 halftime lead over Washington. Thomas also grabbed three rebounds and hit 3-of-5 three-point tries. Aaron Craft scored eight points, dished out six assists, and shot 4-of-7 for the Buckeyes. Jernard Jarreau led the way for the Huskies in the first half, with five points and five rebounds.

FINAL: Akron used an efficient offense to power past Penn State 85-60 on Sunday at Coliseo de Puerto Rico in San Juan in the Puerto Rico Tip-Off. Akron (3-2) hit 59 percent of its field goals (27-of-46) and shot 23-of-31 from the free throw line. D.J. Newbill scored 20 points to lead Penn State, which lost star point guard Tim Frazier early to an injury. Akron took control of the game right after halftime. Down 39-37 with 17:31 in the game, the Zips broke out for a 26-4 run to take a 20-point lead in the middle of the second half.

HALFTIME: Despite losing Tim Frazier early to a left foot injury, Penn State leads Akron 36-32 at halftime. Frazier, who leads Penn State in scoring on the season (21.7 points per game), didn't even get a shot attempt before leaving the game. Akron's leading scorer, Alex Abreu, only has three points himself. D.J. Newbill led the way for Penn State in the first half, with 14 points. The Zips' Zeke Marshall had a big first half, with 10 points.

HALFTIME: Jared Berggren and Ben Brust led No. 20 Wisconsin in the first half to carry the Badgers to a 42-24 lead over Cornell. Berggren scored 16 points and grabbed four rebounds, while Brust added seven points and seven rebounds. Wisconsin used a 14-0 after Cornell scored the game's first bucket to seize control of the game. The Badgers shot 5-of-9 from beyond the arc in the first half (56 percent), had eight offensive rebounds and tallied 11 assists on 16 field goals.