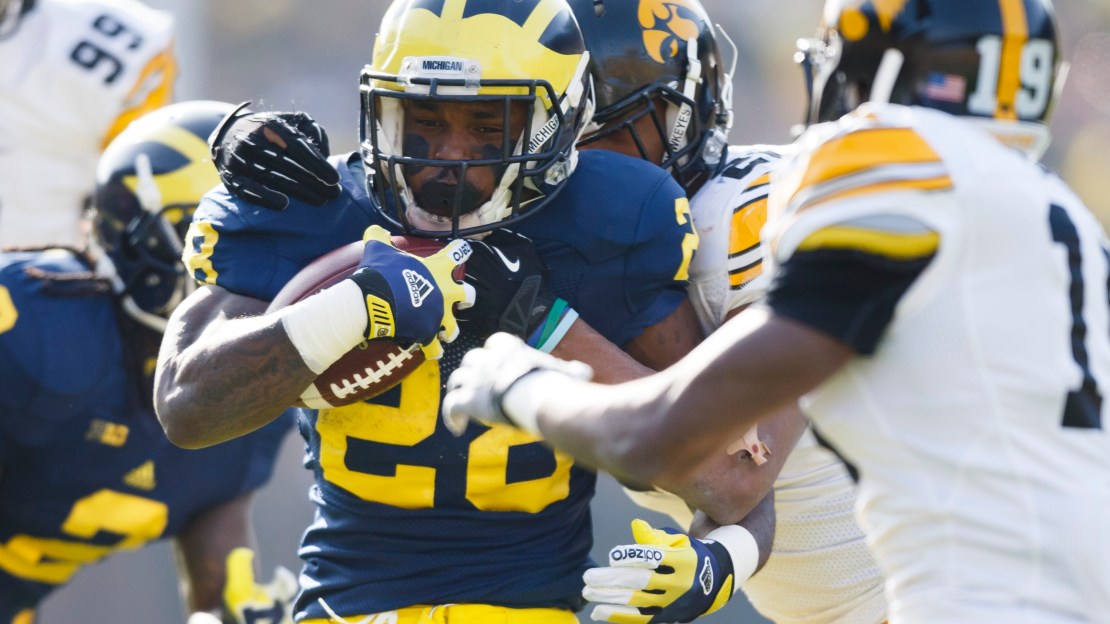 Iowa's Henry Krieger-Coble caught two passes for 20 yards and one touchdown in the quarter, and the two teams are tied 7-7 at the end of the first. No. 24 Michigan struck first when Devin Gardner turned a quarterback sneak into a one-yard touchdown run, the final play of a 12-play, 70-yard drive.

The Hawkeyes got even after James Vandenberg threw a 16-yard touchdown pass to Krieger-Coble to end a 13-play, 75-yard drive that tied the score at seven.

The Wolverines have possession on Iowa's 30-yard line to start the second quarter.

Michigan running back Fitzgerald Toussaint left the game in the first quarter with an injury. He needed to be carted off the field, and it was a scary sight. See Toussaint below: Denard or Devin? Devin or Denard? Honestly, I don't think it will matter, as #Wolverines roll on Senior Day vs. sinking #Hawkeyes. #B1G

Player on the spot: Iowa QB James Vandenberg. His season-long struggle continues. And now he?ll face the No. 2 defense in the Big Ten overall (288.0 ypg). But last week in an overtime triumph vs. Northwestern, the Wolverine defense was gouged for 431 yards. That was the most it had yielded since Alabama notched the same total in the season opener. So, maybe Vandenberg will have some success. Of the 11 quarterbacks eligible to be ranked in passing efficiency, Vandenberg is 11th.

Key matchup: Michigan offense vs. Iowa defense. What has happened to the Hawkeye defense? While the offense has been in a season-long malaise, the defense was solid-at least early on. But the unit has now allowed at least 400 yards in each of the last four games.

Key number: 3, fumbles lost by Iowa. That ties for second in the nation for fewest fumbles lost. The Hawkeyes are tied for sixth in the country in fewest turnovers with nine.

Key note: Devin Gardner has completed 28-of-47 passes for 520 yards and four touchdowns as the starter in the last two games, while also running the ball 19 times for 68 yards and three more scores.