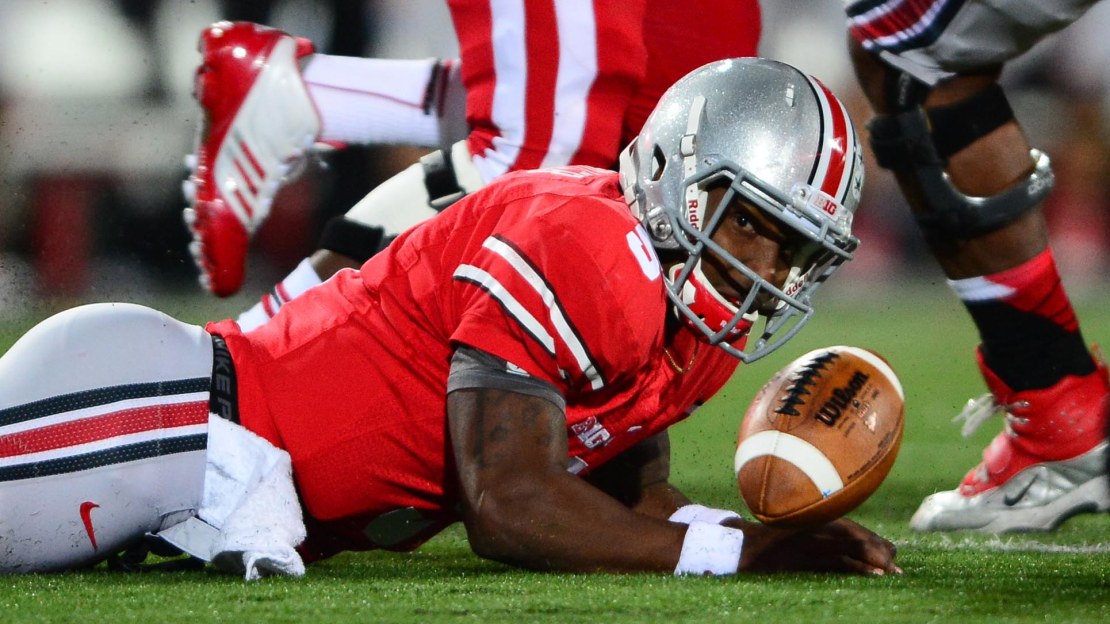 The focus this week is on Madison, where Ohio State will try to move to 11-0. Wisconsin has a spot in the Big Ten title game sewn up but would like to win a share of the league title. To have a shot, the Badgers must down the Buckeyes.

Nebraska looks to remain in control Legends with a home win over Minnesota. Michigan will try to keep pace with the Huskers by beating Iowa. And Purdue (at Illinois), Michigan State (Northwestern), Indiana (at Penn State) and Iowa look to stay alive in the push for bowl eligibility. Check out my previews and ranking of all six Big Ten games this Saturday.

1. Ohio State at Wisconsin | Full scoreboard & TV info
Why you should watch: The Buckeyes, who were off last week, are 10-0 and seeking a sixth perfect season, which is all probation-strapped Ohio State has to play for. The Badgers have clinched a spot in the Big Ten title game but still trail Ohio State in the Leaders. They need to win out and see OSU lose its last two games to get a share of the Leaders Division championship.

Player on the spot: Wisconsin quarterback Curt Phillips. Bravo to the fifth-year senior who persevered through three right knee surgeries to make the first start of his career last week in a 62-14 triumph at Indiana. Phillips ran seven times for 68 yards and completed four-of-seven passes for 41 yards and a touchdown. And he also had no turnovers. But Phillips likely will have to do more in the passing game vs. an Ohio State defense that is a few notches better than Indiana?s unit, which allowed the Badgers to run for a school single-game record 564 yards. Can Phillips make enough passing plays to keep the OSU defense honest?

Key matchup: Ohio State QB Braxton Miller vs. Wisconsin front seven. Miller?s skills and exploits are well-documented. The guy simply is the quintessential one-man gang who can make something out of nothing and score each time he touches the ball. Led by linebackers Mike Taylor and Chris Borland, the Badger defense never gets its props, which is too bad. The group stymied a vaunted Indiana offense last week, allowing just 294 yards. In fact, no foe has notched over 300 yards vs. Wisconsin since Nebraska tallied 440 on Sept. 29. And Wisconsin has the No. 1 rush defense in the Big Ten (103.4 ypg).

Key number: 6-5, Ohio State?s record vs. Wisconsin in the last 11 meetings. The last time the Buckeyes came to Madison in 2010, they ranked No. 1 in the nation. And they lost. OSU topped the Badgers last year on a last-second touchdown pass in Columbus. The point: This is a growing rivalry.

2. Northwestern at Michigan State| Full scoreboard & TV info
Why you should watch: The Spartans, who were off last week, are still one win from being bowl eligible. The Wildcats can?t win the Legends Division?s spot in the Big Ten title game, but they would like to win out to enhance their bowl prospects.

Player on the spot: The Spartan offensive line. It needs to protect quarterback Andrew Maxwell. But it also needs to get a push in the ground game for an offense that is No. 8 in the Big Ten in rushing (141.9 ypg). The Michigan State front has had to deal with injuries, which have hindered the group?s chemistry and development.

Key matchup: Northwestern QB Kain Colter vs. Michigan State front seven. The Spartans have the Big Ten?s top defense (288.0 ypg). And it will be put to the test by Colter, who is one of the Big Ten?s most dynamic weapons. He was at it again last week at Michigan, generally looking sensational in running for 82 yards and hitting 8-of-14 passes for 96 yards and a touchdown. Spartans like Max Bullough, Denicos Allen and William Gholston must excel and contain Colter.

Key number: 473, yards allowed by Michigan State in its last game (vs. Nebraska). It was the most yards the Spartans have yielded all season. MSU still has the No. 1 defense in the Big Ten (288.0 ypg).

Key note: Most think these teams are fighting for a spot in the Gator Bowl, with the winner having an edge in nabbing the New Year?s Day affair.

3. Minnesota at Nebraska| Full scoreboard & TV info
Why you should watch: The Cornhuskers must win to continue to control their destiny in the Legends Division. The Golden Gophers became bowl eligible last week but want to improve their bowl stock. And a win over Nebraska would be by far the Gophers? best of the season.

Player on the spot: Minnesota QB Philip Nelson. The true freshman has been a revelation since moving into the starting lineup on Oct. 20. He?s 2-2, showing playmaking ability with his feet and a nice arm. Nelson will need to be turnover free and make some big plays for the Gophers to have any shot to escape Lincoln with a victory.

Key matchup: Nebraska offensive line vs. Minnesota defensive line. It?s this simple-if the Cornhuskers can push around an underrated Golden Gopher front led by tackle Ra?Shede Hageman and end D.L. Wilhite, they will cruise. Minnesota has a decent defense, ranking No. 8 vs. the run (168.0 ypg), No. 3 vs. the pass (168.8 ypg) and No. 4 overall (336.8 ypg). But Nebraska has the top offense in the league (482.4 ypg) and is No. 1 in rushing (269.3 ypg). Running back Ameer Abdullah has been a revelation, and Rex Burkhead could be back.

Key number: 25, turnovers by Nebraska, which ranks No. 1 in the Big Ten. The Cornhuskers also are first in fumbles lost with 16.

Key note: Nebraska has won the last 15 meetings with Minnesota dating to 1963. The team?s last met in Lincoln in 1990.

4. Iowa at Michigan| Full scoreboard & TV info
Why you should watch: The Hawkeyes need to win out to become bowl eligible for a 12th season in a row, but they are in the midst of a four-game losing skein. Michigan needs to win to maintain pace with Nebraska in the Legends Division, as the Wolverines look to end a three-game losing streak to the Hawkeyes-the most games in a row they ever have lost to Iowa in the series. Will Denard Robinson play? Or will Devin Gardner start again? Stay tuned.

Player on the spot: Iowa QB James Vandenberg. His season-long struggle continues. And now he?ll face the No. 2 defense in the Big Ten overall (288.0 ypg). But last week in an overtime triumph vs. Northwestern, the Wolverine defense was gouged for 431 yards. That was the most it had yielded since Alabama notched the same total in the season opener. So, maybe Vandenberg will have some success. Of the 11 quarterbacks eligible to be ranked in passing efficiency, Vandenberg is 11th.

Key matchup: Michigan offense vs. Iowa defense. What has happened to the Hawkeye defense? While the offense has been in a season-long malaise, the defense was solid-at least early on. But the unit has now allowed at least 400 yards in each of the last four games.

Key number: 3, fumbles lost by Iowa. That ties for second in the nation for fewest fumbles lost. The Hawkeyes are tied for sixth in the country in fewest turnovers with nine.

Key note: Devin Gardner has completed 28-of-47 passes for 520 yards and four touchdowns as the starter in the last two games, while also running the ball 19 times for 68 yards and three more scores.

5. Purdue at Illinois| Full scoreboard & TV info
Why you should watch: This is a battle for The Cannon Trophy. Bet you didn?t know that. The Boilermakers broke a five-game losing skid last week at Iowa and can still make a bowl if it wins out at Illinois and vs. Indiana.

Player on the spot: Purdue QB Robert Marve. The guy is remarkable, starting the last two games for an ineffective Caleb TerBush despite having a torn ACL. Marve led the Boilermakers to a 27-24 win at Iowa last Saturday that kept faint bowl hopes alive. The sixth-year senior played his best game of the year when it mattered most by hitting 25-of-33 passes for 266 yards and two touchdowns vs. the Hawkeyes. Purdue must win its last two games to get to 6-6. And with the inspirational play of Marve, the Boilers may get one step closer playing an Illinois team that is reeling with seven defeats in a row.

Key matchup: Purdue defensive line vs. Illinois offensive line. The Boilermaker front has some top talent in tackles Kawann Short and Bruce Gaston, along with end Ryan Russell. The Fighting Illini o-line has been a mess most of the season. Purdue brings some mojo into the game, holding Iowa to just 74 yards rushing last week. If Illinois can?t get a push and protect, it will have little chance.

Key note: Tim Beckman went 1-1 vs. Purdue when he was head coach of Toledo. But Purdue has four of its last six trips to Champaign.

6. Indiana at Penn State| Full scoreboard & TV info
Why you should watch: The Hoosiers must win out to get to a bowl for the first time since 2007, but they are reeling after absorbing a 62-14 thumping at home by Wisconsin. Penn State also is coming off a loss (at Nebraska), so it would like to get back on the winning track and finish the season on an uptick.

Player on the spot: Indiana QB Cameron Coffman. He, along with Nate Sudfeld, needs to have a big game. Last week against Wisconsin, the Hoosiers had just 294 yards, the second-lowest total of the season. Neither quarterback got in a rhythm as IU?s string of scoring at least 24 points in each game ended. Penn State defenders Sean Stanley, Deion Barnes. Gerald Hodges, Glenn Carson and Michael Mauti are playing well.

Key matchup: Penn State offense vs. Indiana defense. The Nittany Lion offense has been good most of the season, ranking No. 4 in the Big Ten (410.1 ypg). The passing has been especially strong, ranking No. 2 (268.8 ypg). The Hoosier defense was trucked last week, allowing 605 yards with 564 coming on the ground. The unit must offer some resistance for Indiana to have any shot. Can IU stop hot Penn State back Zach Zwinak, who has 275 yards rushing the last two weeks?