Big Ten Geeks: One Week In 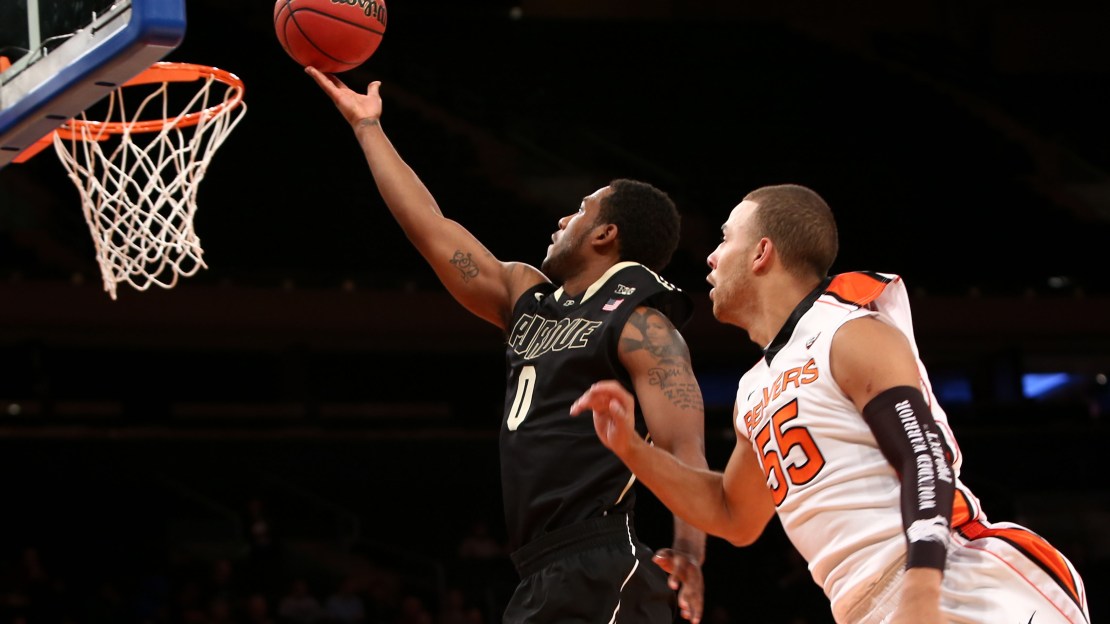 After a week of games, primarily of the cupcake blowout variety, the Big Ten is a cumulative 23-5. Can we learn anything from what we've seen so far? Here's a few thoughts heading into the weekend.

Purdue is 1-2 with a close loss to Bucknell, a blowout of Hofstra, and a controversial loss to Villanova. We aren't high on these Boilermakers and don't expect them to make the NCAA tournament, but in fairness, Purdue is just a few plays from being 3-0 instead. The Bucknell game was close the whole way, with D.J. Byrd missing a wide open three that likely would have sent the game to overtime. Indeed, it seemed that the "PURDUE VS. BUCKNELL" button had been pressed at an undisclosed Buffalo Wild Wings, as two Bucknell defenders collided right in front of Byrd to give him the open look.

The Villanova loss was impacted by a questionable call, with an inadvertent elbow from Byrd resulting in a flagrant foul that gave Villanova two free throws and the ball. Purdue still could have won the game regardless, either in regulation or overtime, but the call certainly had an impact.

Setting these circumstances aside, it should be noted that having either of these games so close says something in itself about these Boilermakers. Bucknell is a solid team that could win the Patriot League, but I don't expect the Bison to be at-large worthy at the end of the season, and Purdue was at home. Villanova was picked 12th in the Big East's preseason coaches' poll, and while that was probably too low, the Wildcats aren't a certain top 50 team either. Going forward, Purdue's resume is already damaged, with possibly only one more opportunity for a top 50 nonconference win (the December 15 matchup with Notre Dame). The Boilermakers really need to stop the bleeding tonight against a decent Oregon State team.

Michigan State had to be a bit disappointed with the opening loss to Connecticut, but the Spartans bounced back nicely with a great win over Kansas. In our Michigan State discussion, Josh and I wondered if Draymond Green's defensive ability, especially on the glass, could be replaced. The early returns are very positive, as the Spartans held both high-major opponents to below 25 percent offensive rebounding rates. Branden Dawson looks healthy, Keith Appling has been fantastic, and Gary Harris is your very early leader for B1G Freshman of the Year. I'd call that a good start.

Not much went right for Wisconsin in its visit to Florida, as the Gators scored at will and the Badgers couldn't shoot a lick. The manner in which Wisconsin lost is troubling, but the result itself shouldn't be; after all, Florida is a likely top 10 team, and this was a true road game. Still, Wisconsin needs to shoot a lot better if they hope to improve the offense from a season ago.  Bo Ryan has a chance to regroup this week with a couple home blowouts ahead of a very interesting Black Friday matchup with Creighton.

Nebraska started out the Tim Miles era in better-than-expected fashion, beating Southern and pulling out a sneaky-good win over Valparaiso. The Huskers thus far appear to have a rather competent defense with good size across the front line. Brandon Ubel's sweet stroke has taken well to a larger shot diet, and Ray Gallegos looks like a completely different player from the guy that redshirted last season for developmental purposes. With the way the schedule sets up, it's not inconceivable that Nebraska gets to 6-0 before hosting USC and Creighton in back-to-back games. Still, our expectation has not changed that Nebraska will be the Big Ten's worst team by a wide margin.

Penn State snuck by St. Francis (PA) and wasn't able to hang with a hyped NC State team. It appears Pat Chambers is reading the Thad Matta short story How to Rest Your Starters (with foreword by Ed DeChellis), as four players are averaging over 30 minutes per game. Tim Frazier has sat out a total of 63 seconds through two games.

The other Big Ten squads have all run rampant over various manifestations of cupcakes, so it's hard to take much away. Indiana has smoked opponents the way a #1 team should, Minnesota is getting Pomeroy's laptop all hot and bothered, and Iowa has destroyed the cupcakiest three-team lineup you may ever see a team start the season with. It's still early, folks, but at least we're done with aircraft carriers for another 12 months.