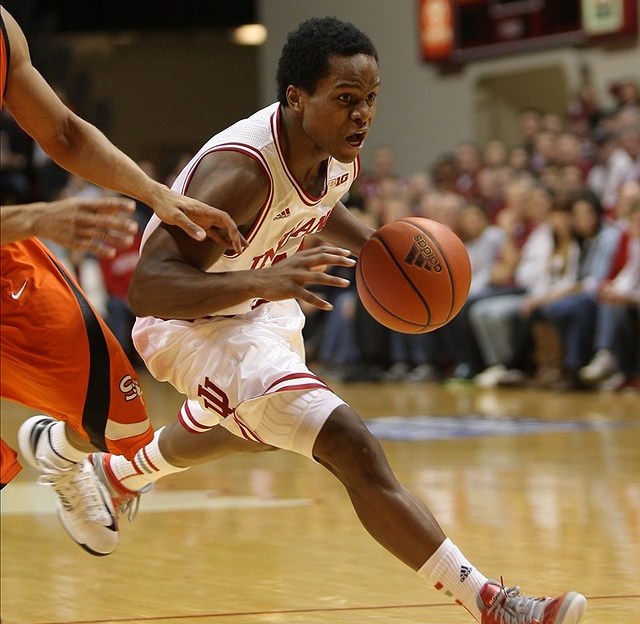 Christian Watford scored 23 points to help No. 1 Indiana defeat Sam Houston State 99-45 on Thursday night in the Progressive Legends Classic. Will Sheehey scored 18 points, Victor Oladipo had 14 and Jordan Hulls 10 for the Hoosiers (3-0), who shot 57 percent from the field and made 9 of 21 3-pointers. Hulls also joined the 1,000-point club.

FINAL: Christian Watford came off the bench to score 23 points and grabbed seven rebounds to lift No. 1 Indiana to 3-0 after a 99-45 win over Sam Houston State on Thursday at Assembly Hall in Bloomington. Watford shot 5-of-8 from the field. Cody Zeller scored 13 points, yanked down seven rebounds, had three assists, and knocked down 5-of-6 shot attempts.

The Hoosiers hit 57 percent of their field goals (30-of-53). Indiana was hot from long range, hitting 9-of-21 threes for a 43 percent night from beyond the arc. The Hoosiers went 30-of-44 from the charity stripe as a team (68 percent). Indiana gave itself second chances during the game, snatching 16 offensive rebounds.

The Hoosiers held Sam Houston State (1-2) to 31 percent shooting from the field and hauled in 24 defensive boards, while only allowing nine offensive rebounds. More Indiana scoring came from Jordan Hulls, who scored 10, Victor Oladipo, who scored 14, and Will Sheehey, who scored 18. Winning the battle on the boards was crucial for Indiana as it grabbed 40 rebounds to 20 for the Bearkats. The Hoosiers never trailed in the game.

HALFTIME: Christian Watford and Cody Zeller combined for a successful first half as No. 1 Indiana leads 52-25 over Sam Houston State. Watford scored 11 points and grabbed four rebounds. Zeller scored eight points, grabbed three rebounds, and shot 3-of-4 from the field. The Hoosiers were able to draw fouls and get to the line with regularity. Indiana made 23 of 23 free throws.

The Hoosiers led from the start and led by as many as 31 points. The game was tied before the Bearkats went into a funk, going the next 4:29 without scoring, and allowing Indiana to take a 16-2 lead with 13:37 to go in the first half. The Hoosiers applied the pressure in the first half, earning second-chance opportunities with six offensive rebounds, to just five for Sam Houston State. Indiana demonstrated its offensive efficiency by racking up 12 assists on 15 baskets. Indiana got points from seven different players.

The Hoosiers have been able to keep the Bearkats' leading scorer, Darius Gatson, under control thus far. The senior enters halftime with zero points, well below his season average of 14.5. Seven Sam Houston State players have scored. Marquel McKinney led the way for Sam Houston State in the first half, with five points and three rebounds.

Will Sheehey throws a dunk down early to get the home fans going.

A nice pass and Cody Zeller throws it down.

Christian Watford gets it to Victor Oladipo and …