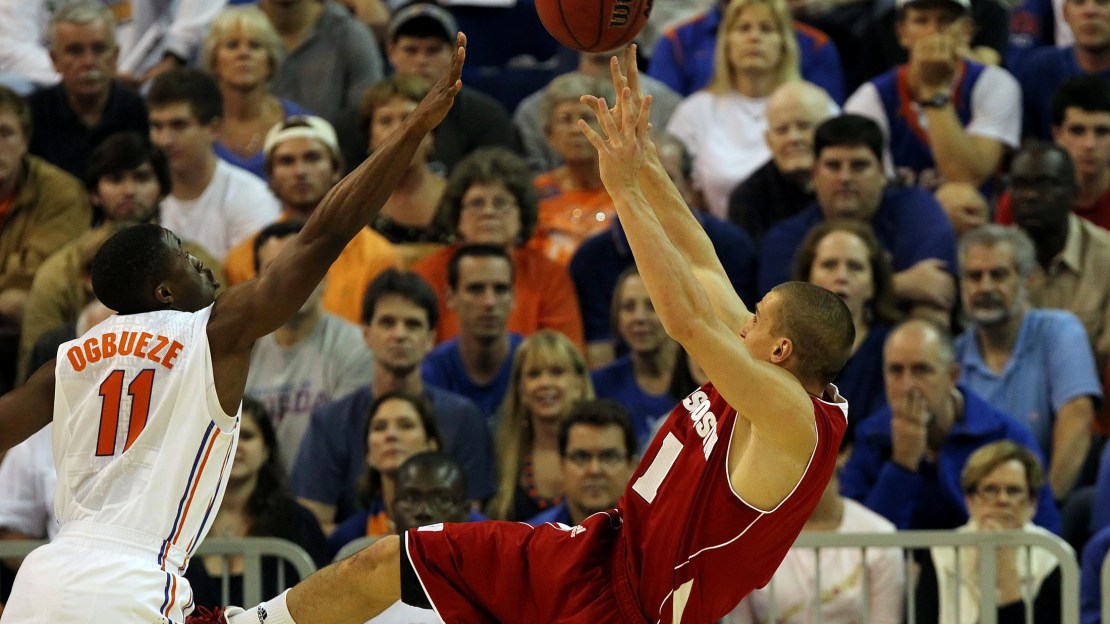 Erik Murphy tied a career-high with 24 points just days after dealing with an illness, and No. 10 Florida beat 22nd-ranked Wisconsin 74-56 on Wednesday night.

Murphy made all 10 of his shots, including two 3-pointers, as the short-handed Gators enjoyed a double-digit lead most of the night. He also had seven rebounds.

Sam Dekker and Jared Berggren had 11 points apiece for Wisconsin (1-1).

The Gators, playing without point guard Scottie Wilbekin (suspension) and forward Casey Prather (concussion), essentially won the game with fast starts in both halves. Florida scored the first nine points of the game and the first seven after intermission.

Brust doesn't even look comfortable in man-to-man situations against Rosario. He's doing whatever he wants. #Badgers

Defense appears optional for #Badgers tonight. We'll see if second half brings change. If not, it's over.

We took their best punch and are only down 12. No way gators shoot like that again this half. Badgers will fight back these next 20 mins

UW is all sorts of dysfunctional tonight.

Erik Murphy with drive left side. Now has 18 points and hasn't missed (8-of-8 from the field).

Can't figure out if Wisconsin was overrated or Florida is that good blowing out Badgers. I think maybe both.

#Badgers wanted to know where they stand after this game. Long way from where they want to be.

Florida's Erik Murphy has matched a career high with 24 points. He's 10-of-10 from the field.

So the verdict is my badgers are just having a rough night, but the should be fine this season!!! #OnWisconsin

Positives for Wisconsin: the bus arrived on time. The uniforms appear to be laundered. Bo's suit seems to fit.

FINAL: Erik Murphy scored 24 points and grabbed seven rebounds to lift No. 10 Florida to a 74-56 win over No. 20 Wisconsin on Wednesday at Stephen C. O'Connell Center in Gainesville.

The Gators hit 62 percent of their field goals (26-of-42) and shot 16-of-20 from the free throw line. The Gators gave themselves second chances during the game, snatching nine offensive rebounds. Florida also got double-digit efforts from Kenny Boynton, who scored 10 and Rosario, who scored 15.

Jared Berggren contributed 11 points and yanked down six rebounds for Wisconsin (1-1) in the game. Traevon Jackson was 3-of-5 from the floor and chipped in eight points for the Badgers. Wisconsin shot just 36 percent from the field (21-of-59). The Badgers also got a double-digit contribution from Sam Dekker, who scored 11.

Winning the battle on the boards was crucial for the Gators as they grabbed 39 rebounds to 21 for Wisconsin. Florida never trailed in the game. The Gators' largest lead was 24, which came with 2:40 to go.

HALFTIME: Erik Murphy scored 16 points and Mike Rosario added 11 for No. 10 Florida in the first half to carry the Gators to a 43-31 lead over No. 20 Wisconsin. The Gators, who scored the game's first nine points, never trailed in the first half and led by as many as 13 points.

Considering Florida shot an impressive 18-of-24 from the field (75 percent), including 6-of-10 from downtown, the Badgers could be down a lot more than the current 12-point differential.

Wisconsin moved the ball well in the first half, accounting for eight assists on 12 field goals, and had eight players score. Jared Berggren led the way with seven points, while Sam Dekker and Ryan Evans each chipped in five.