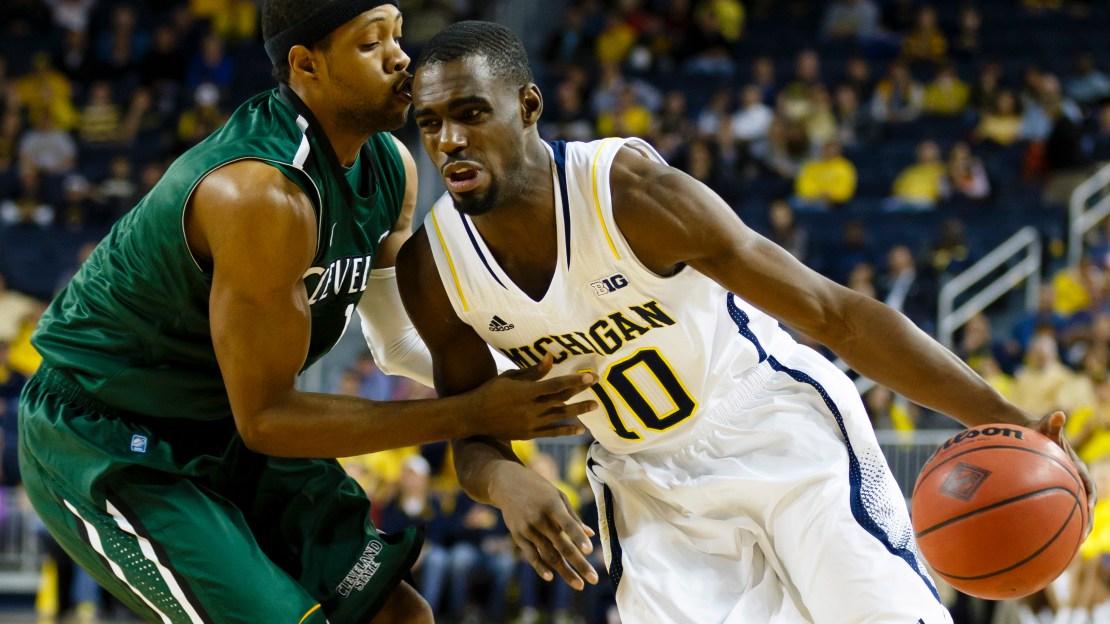 Tim Hardaway Jr. had 17 points and six rebounds, and No. 5 Michigan advanced to the semifinals of the NIT Season Tip-Off with a 77-47 victory over Cleveland State on Tuesday night.

It was the third straight victory by at least 30 points for the Wolverines (3-0), who shot 51 percent from the field against a Cleveland State (2-1) team that was coming off an overtime win the day before.

Nik Stauskas scored 15 points, and Trey Burke added 12 points and seven assists. Michigan went on a 29-5 run to finish the first half. It was 42-14 at halftime.

The Wolverines shot 25 of 40 from 3-point range in their first two games but went only 9 of 24 on Tuesday.

FINAL: Tim Hardaway Jr. scored 17 points and grabbed six rebounds and Nik Stauskas added 15 points and six boards to lead No. 5 Michigan to a 77-47 victory over Cleveland State on Tuesday at Crisler Center in the Preseason NIT – North Region.

Michigan (2-0) held Cleveland State (1-1) to 30 percent shooting from the field and grabbed 34 defensive rebounds, while only allowing seven offensive rebounds.

Hardaway Jr. carried the offensive load for the Wolverines, finishing with four assists and 7-of-12 shooting from the field.

Michigan shot 51 percent from the field (30-of-59). The Wolverines were on fire from beyond the arc during the game, shooting 38 percent (9-of-24). Michigan also got a double-digit performance from Trey Burke, who scored 12.

Charlie Lee had six points, pulled down four rebounds, and handed out five assists for the Vikings in the loss. Cleveland State got double-figure scoring from Anton Grady, who scored 15.

The Wolverines won the rebounding battle en route to victory, pulling down 45 boards to 27 for the Vikings. Michigan never trailed in the game. The Wolverines' largest lead was 33, which came with 5:29 remaining.

HALFTIME: No. 5 Michigan took full advantage of the stellar combination of Tim Hardaway Jr. and Mitch McGary, ending the first half against Cleveland State up 42-14.

The Vikings have been held to 22 percent shooting in the first half.

The Wolverines, who led the entire first 20 minutes and by as many as 28 points, went on a 32-7 run to close the half.

Through 20 minutes of action, a major weapon for the Vikings has been shut down, as the Wolverines have kept Charlie Lee in check. The sophomore is averaging 17 per game for the year, but has just three points at the break.