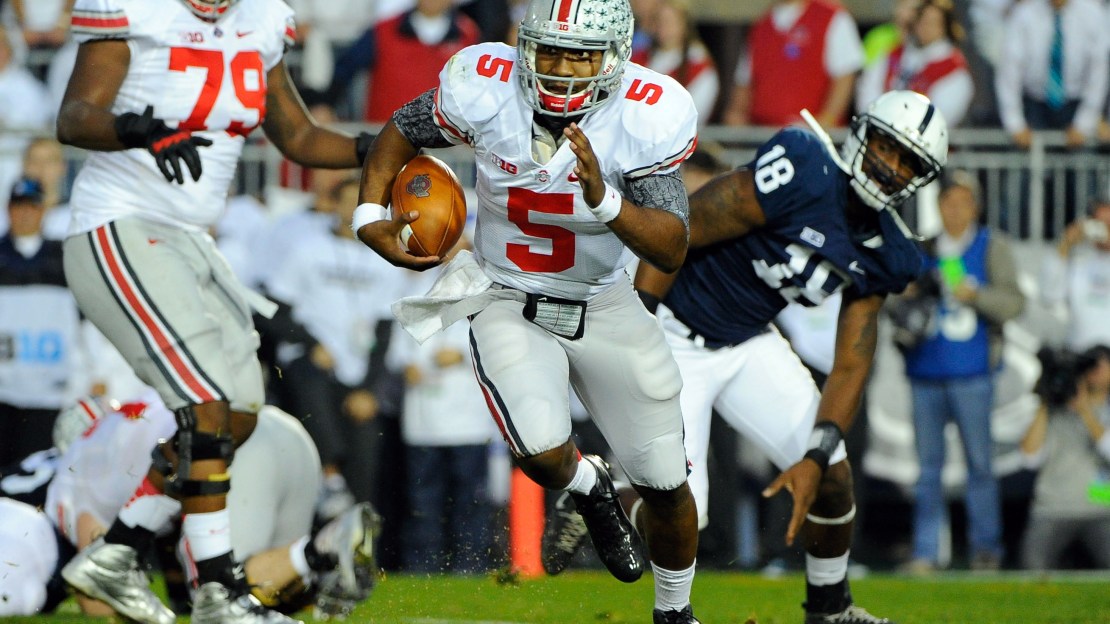 Are Ohio State and Wisconsin rivals? Apparently so. Sure, Buckeyes-Badgers isn?t on par with Buckeyes-Wolverines. It?s not even close. Still, it?s a rivalry. Check that out and other newsy tidbits in my daily links. The burgeoning Wisconsin-Ohio State feud was fueled the last time the Buckeyes visited Madison in 2010. Ohio State arrived with a No. 1 ranking and left with a 31-18 loss that cost the Buckeyes a shot at playing for the national title.

Last year, Ohio State knocked off Wisconsin, 33-29, with a game-winning touchdown pass in the waning seconds. What?s a stake this Saturday? Ohio State has already clinched at least a share of the Leaders Division. Wisconsin already has clinched a spot in the Big Ten title game. But the Badgers don?t want to ?back? in to the Big Ten title game. For the record, Ohio State is 6-5 vs. Wisconsin in the last 11 meetings. That sure looks like a rivalry.

By this time next week, Wisconsin could own two of the most prestigious records in college football. Ron Dayne is the FBS all-time leading rushing (6,397). And Montee Ball needs two touchdowns to become the all-time FBD leading touchdown scorer (79). But which record is most impressive? Andy Baggot of the Wisconsin State Journal think?s Ball?s mark is.

Baggot believes Ball's record gets the edge because of its dramatic arc, as Ball did most of his work later in his career. Ball appeared in 17 games before he got his first start for the Badgers. In eight of those games, he had five carries or fewer. Since becoming the starter 10 games into the 2010 season, Ball has crammed 67 touchdowns into 28 games, which is mind-blowing when you think about it. Conversely, Dayne became a starter five games into his freshman season in 1996 and just kept grinding.

You have to give Michigan offensive coordinator Al Borges credit. The guy has shifted the Wolverine attack from being run-oriented under Denard Robinson to being pass-oriented under Devin Gardner. It?s really quite remarkable.

Gardner passed for 234 yards against Minnesota and 286 last week against Northwestern. Those are two of the three most productive passing days by a Michigan quarterback all season. The aerial game also has created room for running back Fitz Toussaint, who ran for a season-high 92 yards last week.

Michigan also typically lines up Gardner under center, which allows the attack to use more two-back, power sets. (Robinson usually lines up in shotgun.) That?s another reason why the offense may have come to life with Gardner at the controls. It will be interesting to see how Michigan handles the quarterbacks once Robinson is over an elbow issue.

Bob Flounders of the Harrisburg Patriot-News takes a look at Penn State?s key games this season. One of the most fun things we have learned is that Bill O?Brien likes to go for it on fourth down. We learned that in the Northwestern game, when the Nittany Lions converted five-of-six on fourth down.

Something else we have learned: wideout Allen Robinson is good. Really good.

Nate Mink of StateCollege.com says Robinson has publicly pledged allegiance to Penn State despite the NCAA allowing all Penn State players to transfer without penalty until preseason practice. His return in 2013, as well as the next five leading receivers and freshmen such as Jesse James, Trevor Williams and Eugene Lewis, would give Penn State a ton of experienced pass-catching options for whoever becomes the new quarterback next season.

There continues to be more questions than answers for Iowa this season.

Randy Peterson of the Des Moines Register points out that 10 games into the season, the passing game is still looking for solutions. Quarterback James Vandenberg increased his touchdown pass total to five Saturday, but he?s still 20 shy of reaching last season?s total. And the Hawkeyes still haven?t figured out how to mentally prepare for the start of a game. Check this out: Iowa has been outscored 38-20 in first quarters against Big Ten opponents, and 72-51 during first halves.

Tom Shatel of the Omaha World-Herald thinks that Nebraska?s Bo Pelini is maturing as a coach.

I have to agree with Shatel, who says the chip on Pelini?s shoulder is gone. Also gone is the edgy tone when he speaks, the defiant ?What do you think?? response to reporters? questions. Shatel has noticed the changes since the Ohio State loss. Unemotional, cordial, matter-of-fact, willing to explain things. Patient. There?s a maturation going on here, says Shatel. Is this the same coach who once angrily confronted Bill Snyder in 2003?

Hey, age and humility have a way of smoothing everyone?s rough edges.

Veteran Champaign News-Gazette writer Bob Asmussen conducts a weekly chat. In this week?s edition, he addressed readers? questions about the futures of football coach Tim Beckman and A.D. Mike Thomas. Yes, it seems preposterous to even bring it up, since both are in just their first seasons. Nonetheless, that?s the world we live in today.

In case you missed this zany detail of Minnesota?s win at Illinois: Because of injury, Minnesota was down to its third-string center.

"Going through three centers and winning a game — that's unheard of," Gopher coach Jerry Kill said. "That gives (offensive coordinator/offensive line coach) Matt Limegrover a lot of credit for making sure we've been snapping all three of those guys. That's more amazing to me than anything, that we can use three centers in one game. Usually, you don't even travel three centers. We just happened to have a guard that can snap."

Yet more proof of how well this staff coaches. You have a bright future, Goldy.

Bo, on Stafford: "He was more cursing situation than me. … Once he settled down and got on the same page, there were no issues." #Huskers

My take: It sure looked bad when I watched it. Glad nothing big came from it for either party. Those situations can get ugly and become regrettable.

My take: I?d worry more about getting a Big Ten trophy than a Leaders Division trophy. But that?s just me.

#Purdue coach Danny Hope on radio show: Two or three times during game, Robert Marve had something to say and rallied team up. 'Warrior.'

My take: Marve is my new favorite player-at least for this week.

Burkhead says he's never had a nagging injury like this one. He's trying his 3rd different knee brace. Said he felt "good" today

My take: Burkhead is back on the practice field. But at this point-with contests left vs. Minnesota and at Iowa-I may consider saving him for bigger games, if you know what I mean. Besides, Ameer Abdullah is playing pretty well.