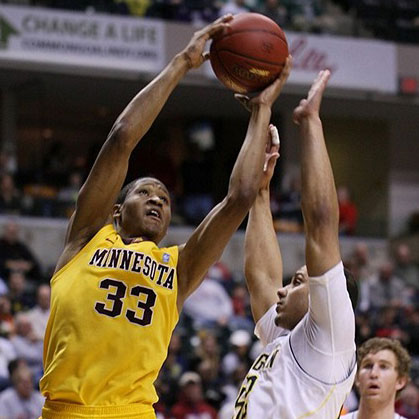 Rodney Williams had 12 points, eight rebounds and four steals, Austin Hollins scored 10 of his 13 points in the game's first five minutes and Minnesota blew by Toledo 82-56 on Monday night.

Joe Coleman finished with 15 points and six rebounds despite eight turnovers, and Oto Osenieks pitched in eight points off the bench for the Gophers (2-0), who played so sharply and confidently in the first half their occasional sloppiness down the stretch didn't matter.

Minnesota started the game out strong with a 23-5 run, which allowed it to take an 18-point lead in the first. Maverick Ahanmisi knocked down a field goal that capped off the run by the Golden Gophers and helped Minnesota lead 48-22 at the half.

Joe Coleman sparked the Golden Gophers, as he scored 15 points and made 5-of-8 shots from the floor in the victory. Austin Hollins shot 5-of-7 from the field and scored 13 points for Minnesota. The Golden Gophers also got a double-digit effort from Rodney Williams Jr., who scored 12.

The Rockets struggled from the floor, shooting 31 percent (19-of-61). Rian Pearson had a good game for Toledo (0-2) in defeat with 18 points, while Nathan Boothe chipped in 13.

Minnesota never trailed in the game. The Golden Gophers' largest lead was 32, which came in the middle of the second half.

HALFTIME: Minnesota has a 48-20 lead over Toledo thanks to a hot-shooting offense. Golden Gophers shot shot 57 percent in the first 20 minutes. The Rockets have been held to 21 percent shooting in the first half.

Minnesota has the lead at halftime due in large part to its ability to get to the foul line. Through 20 minutes of play, the Golden Gophers are 12-for-14 from the free throw line.

Minnesota didn't trail once in the first half and it also led by as many as 28 points.

The game was knotted up when Toledo went 3:31 without scoring, allowing the Golden Gophers to take a 12-0 lead early in the game.