Best of Week 12: All eyes will be on Madison 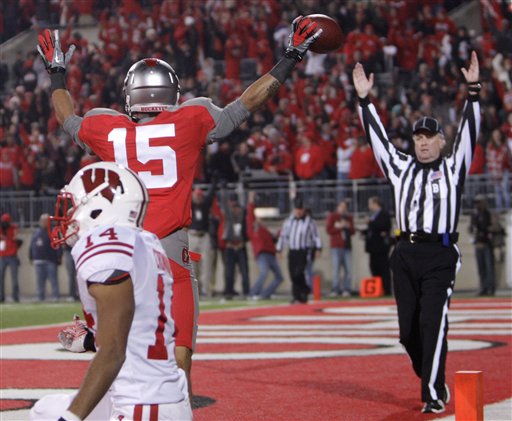 All eyes will be on Madison, Wis., where No. 6 Ohio State plays Wisconsin in a Week 12 that lacks compelling storylines. The Buckeyes are 10-0 and in search of perfection. The last time Ohio State came to Wisconsin, it got drummed, 31-18, in 2010. The Badgers already have the Leaders Division spot in the Big Ten title game sewn up, but a victory over the Buckeyes would be Wisconsin?s most impressive win of the season and give it momentum.

Purdue (at Illinois), Iowa (at Michigan) and Indiana (at Penn State) have their figurative backs against the bowl wall as they make road trips. Each has six losses and must win out to become eligible for the postseason.

Michigan State is just one triumph away from punching its bowl ticket for a sixth season in succession as it plays host to Northwestern, which has lost three of its last five games.

Penn State (vs. Indiana) continues to play for pride and a strong finish after dropping two of its last three games. By the way: The Nittany Lions are 15-0 all-time vs. the Hoosiers.

Nebraska (vs. Minnesota) and Michigan (vs. Iowa) look to remain deadlocked atop the Legends Division. But know this: If each wins out, the Cornhuskers will go to the Big Ten championship game since they hold the tiebreaker by virtue of their win over the Wolverines earlier this season.

BEST GAME: It doesn?t get much better than Ohio State at Wisconsin, arguably the two best teams in the Leaders Division. The Buckeyes, who were off last week, are 10-0 and seeking a sixth perfect season, which is all probation-strapped Ohio State has to play for. The Badgers have clinched a spot in the Big Ten title game but still trail Ohio State in the Leaders. They need to win out and see OSU lose its last two games to get the Leaders Trophy, for what that is worth. Last year?s game was epic, as Buckeye quarterback Braxton Miller heaved a 40-yard touchdown pass to Devin Smith with 20 seconds left to lift the Buckeyes to a 33-29 win. A week earlier, the Badgers were stunned on a last-second game-winning touchdown pass in a loss at Michigan State.

BEST MATCHUP: Ohio State QB Braxton Miller vs. Wisconsin front seven. Miller?s skills and exploits are well-documented. The guy simply is the quintessential one-man gang who can make something out of nothing and score each time he touches the ball. Led by linebackers Mike Taylor and Chris Borland, the Badger defense never gets its props, which is too bad. The group stymied a vaunted Indiana offense last week, allowing just 294 yards. In fact, no foe has notched over 300 yards vs. Wisconsin since Nebraska tallied 440 on Sept. 29. And Wisconsin has the No. 1 rush defense in the Big Ten (103.4 ypg).

PLAYER ON THE SPOT: Wisconsin quarterback Curt Phillips. Bravo to the fifth-year senior who persevered through three right knee surgeries to make the first start of his career last week in a 62-14 triumph at Indiana. Phillips played a clean turnover game, ran seven times for 68 yards and hit four-of-seven passes for 41 yards and a touchdown. But Phillips likely will have to do more in the passing game vs. an Ohio State defense that is a few notches better than Indiana?s unit, which allowed the Badgers to run for a school single-game record 564 yards. Can Phillips make enough passing plays to keep the OSU defense honest?

KEEP AN EYE ON: Purdue QB Robert Marve. The guy is remarkable, starting the last two games for an ineffective Caleb TerBush despite having a torn ACL. Marve led the Boilermakers to a 27-24 win at Iowa last Saturday that kept faint bowl hopes alive. The sixth-year senior played his best game of the year when it mattered most by hitting 25-of-33 passes for 266 yards and two touchdowns vs. the Hawkeyes. Purdue must win its last two games to get to 6-6. And with the inspirational play of Marve, the Boilers may get one step closer playing an Illinois team that is reeling with seven defeats in a row.

BEST COORDINATOR MATCHUP: Northwestern offensive coordinator Mick McCall vs. Michigan State defensive coordinator Pat Narduzzi. After a three-game slumber in which his attack failed to gain more than 301 yards in a contest, McCall has seen the Wildcat offense come to life with 433 and 431 yards in each of the last two weeks. Narduzzi pushes the buttons on the No. 1 defense in the Big Ten (288.0 ypg), but it is coming off its worst effort of the season in yielding 473 yards in a 28-24 loss to Nebraska two weeks ago. The Spartans, who were off last week, need one more win to become bowl eligible. Will it happen vs. Northwestern? This matchup will go a long way toward determining that.

BEST COACHING MATCHUP: Ohio State?s Urban Meyer vs. Wisconsin?s Bret Bielema. Who can forget their dust-up last February over recruiting? Neither professes any hard feelings, at least not publicly. Now, they get to face-off on the gridiron. Unable to go to a bowl or play in the Big Ten title game because of NCAA probation, Meyer?s goal is perfection. To continue that march, he must walk through Bielema, whose team still is looking for a signature win. And this would be it vs. the No. 6 Buckeyes.

BEST QUARTERBACK MATCHUP: Not too much to choose from, so let?s go with Indiana?s Cam Coffman vs. Penn State?s Matt McGloin. Coffman, a JC transfer who shares time with true freshman Nate Sudfeld, pulls the trigger on a quick-paced offense that ranks No. 3 in the Big Ten (431.4 ypg) but is coming off its worst scoring effort of the season in a 62-14 loss to Wisconsin that saw IU gain just 294 yards. McGloin?s offense also plays at a fast clip, ranking No. 4 in the league (410.1 ypg). The sparks could fly.