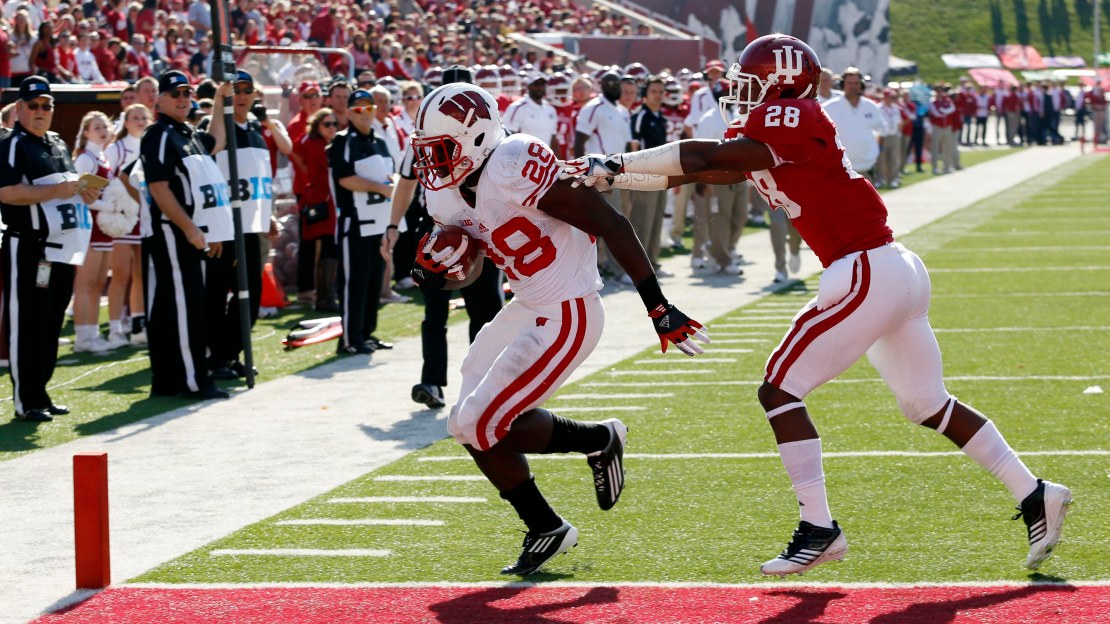 Wisconsin picked up 177 yards on the ground game during the first quarter, and the Badgers lead 14-0. Wisconsin's defense shut down Indiana's aerial attack in the quarter, holding the Hoosiers to 30 passing yards. The Badgers got on the scoreboard first, rattling off an eight-play, 69-yard drive that ended in a score when Montee Ball ran 10 yards to paydirt. The score tied Ball with Ricky Williams on the career TD list.

The Badgers added to their advantage when Curt Phillips threw a two-yard touchdown pass to Sam Arneson, putting a bow on an eight-play, 69-yard drive to give Wisconsin the lead, 14-0. The Badgers threw just two times during that series.

Wisconsin is threatening to score to start the second quarter and have the ball at Indiana's three-yard line.

Player on the spot: The Wisconsin quarterback. Joel Stave is out for the rest of the regular season with a broken collar bone. The Badgers were off last week and used the extra time to fins Stave?s replacement: Danny O?Brien or Curt Philips? Reports say Philips will be the man. The attack was a bit tepid with O?Brien at the controls to start the season, so Philips will get his shot after missing 2010 and 2011 with knee injuries and playing sparingly just twice in 2012. The fifth-year senior must produce if the Badgers want to notch a win at Indiana and remain in control of their destiny in the Leaders Division and chug toward the Rose Bowl for a second season in a row.

Key matchup: Indiana offensive line vs. Wisconsin defensive line. Bret Bielema says this is his deepest line since being Badger head coach. The unit is fortified by players like tackles Beau Allen and Ethan Hemer, along with ends Pat Muldoon and David Gilbert. They will test a young Hoosier front that starts a pair of true freshmen. If the Indiana front can?t get a push to establish a ground game, the vaunted Hoosier offense may struggle.

Key number: 43.9, percent of times Wisconsin has forced foes to go three-and-out. That?s the third-best rate of any team in the nation. Only Florida State (49.2) and Alabama (45.4) have better percentages.

Key note: Indiana has scored 24 or more points in each game this season and 10 straight overall, a school record. Want more? The Hoosiers defense has given up just 17 points in the last 102:12.