Gardner, Michigan down Northwestern in overtime 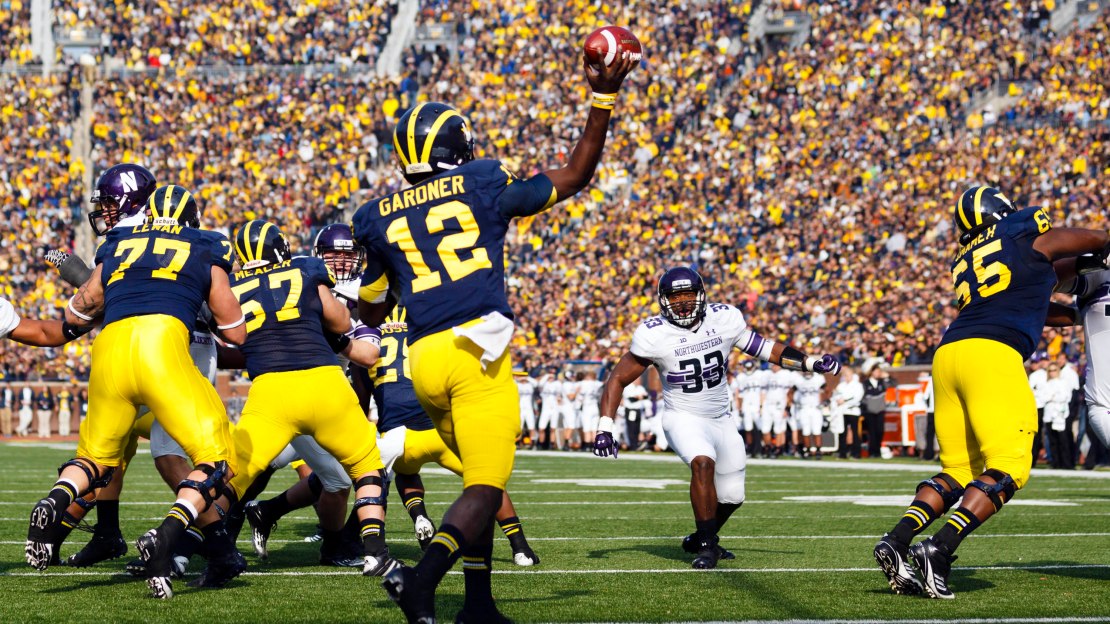 Devin Gardner ran for a 1-yard touchdown in overtime and Michigan's defense responded with a stop, giving the Wolverines a wild 38-31 win over Northwestern on Saturday. Trevor Siemian threw a 15-yard pass to Tony Jones with 3:59 left to give the Wildcats a 31-28 lead and Gardner threw an interception on the next snap.

Northwestern couldn't pick up enough first downs to run out the clock in regulation and the Wolverines took advantage.

RECAP: Michigan needed extra time to beat No. 24 Northwestern as it beat the Wildcats 38-31 in one overtimes on Saturday at Michigan Stadium. After the Wolverines scored on Devin Gardner's one-yard touchdown run to open the first overtime, Northwestern failed to score, getting stopped at the 17 on fourth-and-2.

The game was a shootout, with the offensive units for both teams putting up big numbers. The teams went wild on the attacking side of the ball, racking up 850 total yards combined.

Michigan's offense dominated, ripping off huge chunks of yardage. The Wolverines burned the Wildcats' defense for five plays of more than 20 yards. Michigan added to the highlight reel when Gardner found Roy Roundtree open for a 53-yard pass with 18 seconds left in the fourth quarter. Later in the drive, Brendan Gibbons made a 26-yard field goal, which tied the score at 31-31.

The Wolverines' offense finished the game having gained 419 yards, including 286 passing yards on 16 completions. Rushing was a key ingredient in Michigan's offensive mix, bringing it 133 yards on 32 carries.

Northwestern's Kain Colter passed for 96 yards, completing eight of 14 throws. He threw one touchdown and no interceptions. Colter also ran for 82 yards on 24 attempts. Colter's favorite target on the day was Christian Jones. He hauled in five catches for 61 yards.

The Wildcats finished with 431 total yards, including 183 yards passing while completing 14 of 21 attempts. Northwestern's ground game balanced its offense, bringing 248 yards on 58 attempts.