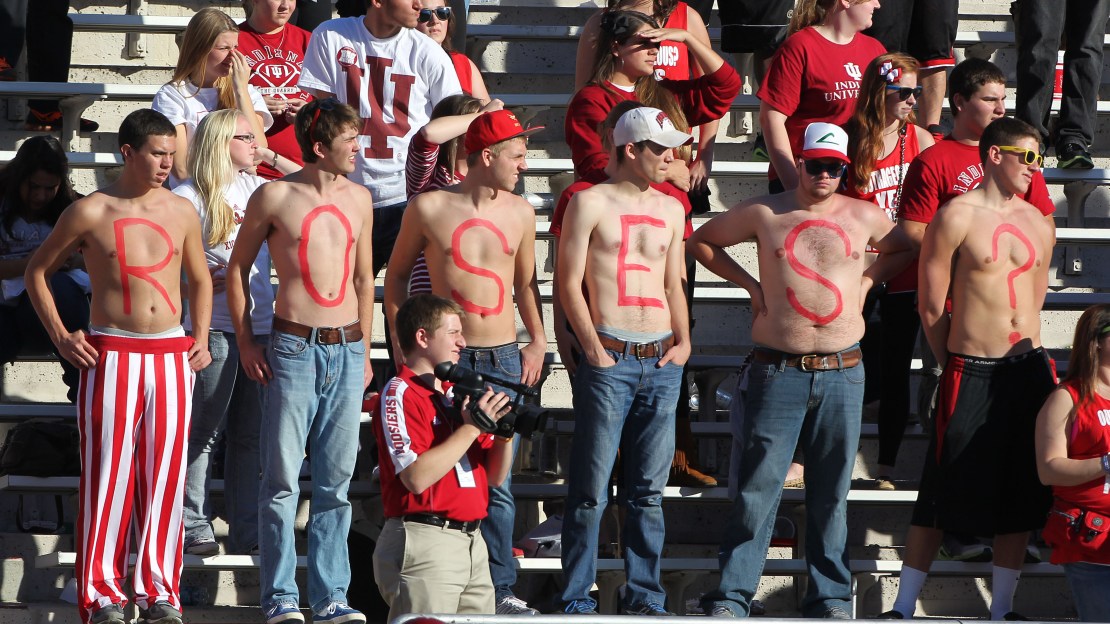 That ?pop? you just heard was Indiana?s Rose Bowl dreams. Oh, it was a LONG shot. We all knew it. But it was fun while it lasted, as the Hoosiers came into today controlling their own destiny in a Leaders Division title chase that would land them in the Big Ten title game with a chance to advance to Pasadena. That caused America-or at least the Midwest-to rub its eyes in disbelief.

But it was true.

Well, Wisconsin didn?t just crush those dreams-it smashed them to smithereens in a 62-14 victory that clinched a second consecutive spot in the Big Ten title game for the Badgers. It was total and utter domination that was fueled by a Badger ground game that produced a school-record 564 yards (8.8 per carry) for a team that had 605 yards overall.

?I?m very excited about the way our guys played today,? said Wisconsin coach Bret Bielema. ?I thought it was a great statement game. Our offense put up record-breaking numbers today, but give credit to everybody.?

Before taking aim at a third consecutive Big Ten championship, the Badgers have games left vs. Ohio State and at Penn State that will go a long way in determining if Wisconsin wins the Leaders. But, again, that is moot, since the Buckeyes and Nittany Lions are on probation. Leaders Division champs or not, Wisconsin is going to Indy for the title game.

It has been an impressive Renaissance for a Badgers program whose season looked lost just about two months ago with an offensive line coach fired and a quarterback change. Now, Wisconsin will get a chance to play in the Rose Bowl for a third straight season.

It was the Montee Ball Show on Saturday, as he led the way with 198 yards rushing and three touchdowns. He needs one more to tie the NCAA career touchdown mark. James White added 161 yards rushing, while Melvin Gordon had 96.

That dominant ground game meant quarterback Curt Phillips didn?t have to throw much-which was good. This was Phillips? first career start, as he has had to deal with three injuries to his right knee during a career that never has taken off because of it. He didn?t play in 2010 or 2011, and had seen just limited action in two games this year.

Nonetheless, Phillips-not Danny O?Brien, the Maryland transfer who started the first three games-was the choice to start with Joel Stave out with a broken collar bone suffered in the last game vs. Michigan State.

If Phillips had had to pass a lot, the thinking went, Wisconsin may be in trouble. But, in the end, the Badgers imposed their will (see physical ground game) on Indiana. And Phillips had to throw just seven times, completing four for 41 yards and a touchdown.

?The plan was to not put a lot on Curt,? said Bielema. ?And obviously, that worked very, very well.?

This game followed the same pattern of so many Wisconsin-Indiana contests in recent vintage. Some of those scores: 33-3; 55-20; 83-20; 59-7. Now, add this to the list of impressive Badgers wins over the Hoosiers. In fact, the last three games, Wisconsin has outscored Indiana, 204-41.

The Hoosiers are 4-6 and still remain in the hunt to play in a bowl for the first time since the 2007 season. But that will mean winning out on the road vs. Penn State and Purdue.

The dream of returning to the Rose Bowl for the first time since the 1967 will have to wait for another season. But make no mistake about it: The Hoosiers are making progress in their second season under Kevin Wilson. Last season, Indiana went 0-11. The Hoosiers have four wins, with Big Ten victories over Illinois and Iowa. And there also have been close calls: 41-39 to Ball State; 31-27 to Michigan State; 52-49 to Ohio State; 31-30 at Navy.

Wisconsin dominated from the start and never relinquished control, building a 17-0 lead early in the second quarter. After Indiana had cut Wisconsin?s lead to 17-7 late in the second quarter, the Badgers delivered a back-breaking-and knockout–blow when James White jetted 69 yards for a touchdown on 3rd-and-16 to stake Wisconsin to a 24-7 halftime lead.

The romp was on.

Truth be told: The Badger defense may be the best kept secret in the Big Ten. On this day, it limited Indiana to 294 yards, with just 233 coming through the air.

And it?s because of the defense that Wisconsin is headed back to Indianapolis for the Big Ten championship game. And it also is chasing history, as the Badgers pursue a third trip in a row to the Rose Bowl. The last Big Ten team to do that was Michigan from 1976-78.

If Wisconsin makes it Pasadena, it may have Stave back. But, until then, it looks like Phillips will be the guy with games left at home vs. Ohio State and at Penn State before the Big Ten championship game.

?I like my squad,? said Bielema. ?It?s the 2012 squad. ?We get better each week and are going through this with our third-string quarterback. Give a lot of credit to our guys perseverance because a lot of times people will let go of the rope in this situation or back away from the things that are in front of them, but our guys just charge ahead full speed.?