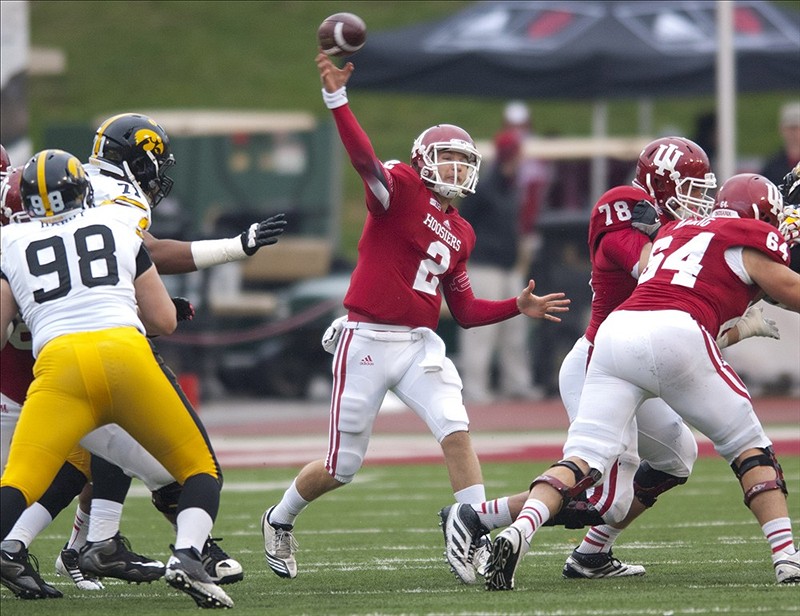 Please excuse Indiana if it doesn?t know how to react to the all the fuss around its home game with Wisconsin this Saturday.

?You guys can say this is a big game, but they?re all big games,? Wilson said in his Tuesday press conference. ?We don?t even talk a lot about the game until the end of the week. We just talk about the preparation.?

[RELATED: Look back at each Hoosiers game of the 2012 season to date.]

Beat the Badgers (6-3 overall, 3-2 in the Big Ten), and Indiana has the tiebreaker over Wisconsin to earn the Leaders Division spot in the Big Ten championship game. After the Wisconsin game, Indiana has a trip to Penn State followed by a journey to Purdue. Wisconsin?s remaining slate is more difficult, as the Badgers play host to Ohio State and travel to Penn State. If Indiana wins its last two games-or earns a split, with Wisconsin losing at least once–the Hoosiers (4-5, 2-3) will go to Indianapolis for the league title game, putting Indiana one win away from its first trip to the Rose Bowl since after the 1967 season.

What in the name of Harry Gonso-the quarterback of that Hoosier team that lost to USC and O.J. Simpson in Pasadena–is going on here?

?We haven?t really acknowledged (the Rose Bowl),? said Indiana offensive coordinator Seth Littrell. ?We?re just focusing on the getting one day better. We know every week that it?s going to be a dog fight and we?re going to have to fight every single week.?

The bad news for the Hoosiers: If Wisconsin beats Indiana, it will clinch the spot in the league title game for a second season in a row. And Indiana will need to win its final two games to just become bowl eligible.

?Our guys are very well aware of how things will align when we go over to Indiana,? Wisconsin coach Bret Bielema said. ?We have a three-game schedule that we have to complete before we move on to the next phase of our season, and I think (our players will) take it as a one-game approach as they have every year here in November.?

Five years have passed since that emotional night in Bloomington, when Indiana saw Purdue rally from a 24-3 hole to tie the game 27-27 before Austin Starr booted a 49-yard field goal with 30 seconds left to win. Since capping that 2007 season with a trip to the Insight Bowl, where the Hoosiers lost to Oklahoma State 49-33, Indiana has gone an aggregate 13-35 overall and 3-29 in the Big Ten.

Bill Lynch, who had taken over for Hoeppner, was fired after the 2010 season and Kevin Wilson was hired. Wilson arrived in Bloomington like a blast of hot air, bringing a fat resume and saddle full of swagger to a school whose football dreams have been turned to rubble since the glorious Bill Mallory era from 1984-1996.

Mallory is the measuring stick for this program that lives in the rolling hills that surround this postcard campus. He?s one of the greatest coaches in school history, taking Indiana to six bowls in 13 seasons. His best seasons were 1987, when the Hoosiers went 8-4 overall and 6-2 in the Big Ten, and 1988, which saw an 8-3-1 mark overall and 5-3 Big Ten record.

Mallory debuted in 1984 with an 0-11 record. His second year produced a 4-7 overall mark and 1-7 Big Ten record. Wilson can relate. His in 2011 was jaw-dropping bad: 1-11 overall and 0-8 in the Big Ten. It was a season spent thinning the roster of malcontents. And it was a season spent doing a lot of suffering and soul-searching.

Look at Indiana now, in control of its own destiny in the Leaders Division. It?s true. Really. Beat Wisconsin, and the Hoosiers? chances of advancing to the Big Ten championship game will become even better.

How delicious is this?

Who cares if Leaders Division heavyweights Ohio State and Penn State aren?t eligible to play in the title game? Doesn?t matter. This is Indiana. It is seeking a beginning, it is seeking a chance to taste big-time success as Wilson tries to build a strong foundation for this long-suffering program that is one of just three in the Big Ten that hasn?t gone to a BCS bowl (Minnesota and Michigan State are the others).

And this is a place where the culture is thin-if it exists at all. It?s easy for the football team to get swallowed up by the basketball team?s shadow. In a way, it?s happening again, as the Hoosier hoops team is No. 1 in every preseason poll. But the spotlight on Saturday will shine on the gridiron for a few glorious moments. And Wilson wants to make sure his Hoosiers seize the moment on what could be a program-defining victory. We're talking about the kind of win that sets Indiana football on an upward trajectory it has been searching for through a string of coaches like Cam Cameron, Gerry DiNardo, Hoeppner, Lynch and now Wilson.

?Point production in the last three weeks has dropped off a lot,? said Wilson. ?We need to pick that back up. The running game needs to get better too. We just need to keep coaching and preparing like a winning team. Wisconsin is a program we respect and a lot of the things we do we?re trying to emulate from them. We?re excited to have the opportunity to play them on Saturday.?

?Our kids are showing some resiliency,? Wilson added. ?They?ve learned they don?t have to hope for things to happen. We make things happen. ??

Saturday is another chance to make something happen. And it would be huge.

GRID BITS: Minnesota and Purdue are the only Big Ten teams with no linebacker among the top 30 tacklers in the league. Mike Rallis ranks 38th with 47 tackles. Keanon Cooper and Aaron Hill are tied for 48th with 43 tackles each. ? The Boilermakers have allowed a Big Ten-worst 19 passing plays of 20 yards or more in five conference games. ? Penn State is looking to post a perfect record in Big Ten road games for just the third time in its 20-year conference history when it visits Nebraska. This will be the Nittany Lions first visit to Lincoln since 2003. ? The Badgers are 22-6 in games played after Nov. 1 in Bret Bielema's seven years. He is 19-2 in the regular season and 17-2 in Big Ten games after Nov. 1. ? Five of Iowa?s games have been decided by three points or less, including two games decided by one point and one in double overtime. ? Minnesota coach Jerry Kill and Illinois coach Tim Beckman faced off while in the MAC. While at Toledo, Beckman coached against Jerry Kill and Northern Illinois in two games. Toledo beat Northern Illinois 20-19 in 2009, but lost 65-30 in 2010. ? Purdue has lost 11 of its last 12 games at Iowa. The last win came in 1992. ? The Illini have given up 32 sacks, 10 more than any other team in the conference. ? Nebraska?s foes are completing only 46 percent of their passes, tops in the nation. ? Against Wisconsin, Ohio State and Minnesota, Purdue opened the game with touchdown drives. Against Penn State, it kicked a field goal. But the Boilermakers went on to score no points in those games? first halves after those early scores. (Purdue did return a kickoff for a touchdown at Ohio State, though.) ? In his last eight November games, Montee Ball is averaging 176.8 yards per game and 7.1 yards per carry while scoring 25 touchdowns. ? The Hoosiers have scored more points (298) in 2012 than they scored all of last season (257). .. IU has won back-to-back Big Ten games for the first time since 2007. ? Michigan is 16-0 under Brady Hoke when scoring 20 or more points. The Wolverines are 1-5 under Hoke when scoring less than 20 points. ? Michigan hasn?t yielded a first quarter touchdown since Week 1 vs. Alabama (Sept. 1) and has not allowed a first quarter score since Week 2 vs. Air Force (Sept. 8). ? The last time Iowa lost to Indiana and Purdue in the same season? 2007.