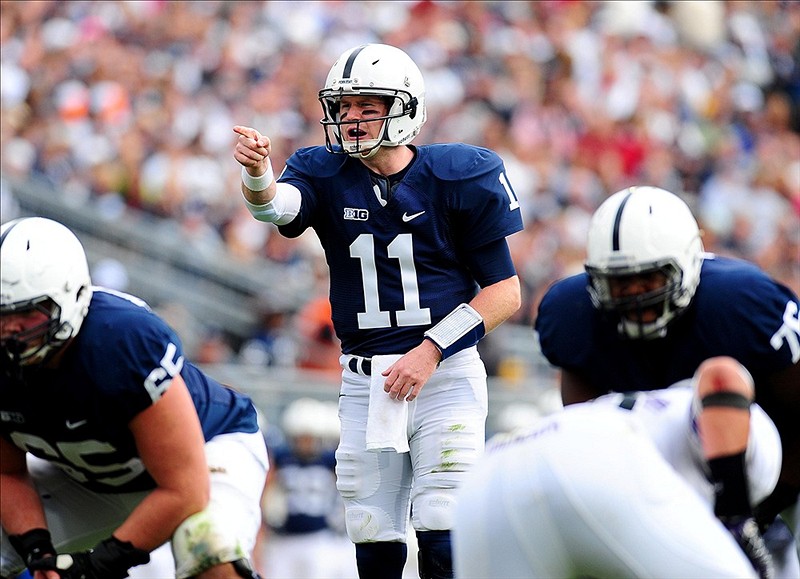 It?s time to get ready for Week 11 of the Big Ten season. And it shapes up to be interesting on many fronts. Can Nebraska make it four wins in a row and knock off Penn State? Wisconsin?s game at Indiana in some ways will be a de facto Leaders Division championship game. Meanwhile, Northwestern plays at Michigan in a ?Survivor? contest in the Legends Division.

Read about those games and more in my weekly game rankings and previews.

As a backdrop, let's take a look at the standings.

1. Penn State at Nebraska | Full scoreboard & TV info
Why you should watch: The Nittany Lions are looking to add wins to what has been a season to remember-and one that has defied odds. A win in Lincoln would be without a doubt Penn State?s best triumph of the season under first-year coach Bill O?Brien. But the Nittany Lions are playing only for pride. The stakes are much higher for Bo Pelini and the Cornhuskers, who need another win to maintain first place in the Legends Division and control of their own destiny in search of the program?s first conference title since 1999.

Player on the spot: Penn State?s Matt McGloin. Or is it Nebraska?s Taylor Martinez? Let?s say both. We all can agree that Ohio State?s Braxton Miller is the top signal-caller in the Big Ten. But this will be a battle to see perhaps who is the second best. McGloin and Martinez are tied for the league lead in touchdown passes with 18. McGloin paces the Big Ten with 2,436 yards passing; Martinez is third with 1,941. Each completes 62 percent of his passes. And each guy?s team is a winner, as the Huskers are 7-2 and the Nittany Lions are 6-3. These guys are good. And read my recent Q&A with McGloin.

Key matchup: Nebraska quarterback Taylor Martinez vs. Penn State front seven. Martinez may be the hottest signal caller in the Big Ten, engineering three big wins in succession. And in two of them, Martinez led the Cornhuskers back from double-digit fourth-quarter holes (at Northwestern and at Michigan State). The Nittany Lions? defense has played well all season and ranks No. 4 in the Big Ten (334.6 ypg). Tackle Jordan Hill may not play because of a knee injury, but the front seven is led by a strong group of linebackers spearheaded by Michael Mauti and Gerald Hodges. And Penn State has excelled at generating turnovers, as it?s No. 1 in the Big Ten in turnover margin and No. 2 in turnovers gained (17). And no school has turned over the ball more than the Cornhuskers (23).

Key note: Nebraska rallied from a 24-14 fourth-quarter deficit for a 28-24 win at Michigan State last week. The rally marked the third time in four Big Ten wins the Huskers had rallied from a double-digit deficit in the second half (17 points, 3rd quarter vs. Wisconsin; 12 points, 4th quarter at Northwestern).

2. Wisconsin at Indiana | Full scoreboard & TV info
Why you should watch: This is the biggest game in Bloomington in ? forever. The Hoosiers have won two in a row and control their destiny. A win over Wisconsin could give Indiana the tiebreaker with the Badgers as well as momentum going into the final two weekends as it seeks an improbable trip to the league title game. A win by Wisconsin would sew up the Leaders Division?s bid to the Big Ten championship game for a second season in succession.

Player on the spot: The Wisconsin quarterback. Joel Stave is out for the rest of the regular season with a broken collar bone. The Badgers were off last week and used the extra time to fins Stave?s replacement: Danny O?Brien or Curt Philips? Reports say Philips will be the man. The attack was a bit tepid with O?Brien at the controls to start the season, so Philips will get his shot after missing 2010 and 2011 with knee injuries and playing sparingly just twice in 2012. The fifth-year senior must produce if the Badgers want to notch a win at Indiana and remain in control of their destiny in the Leaders Division and chug toward the Rose Bowl for a second season in a row.

Key matchup: Indiana offensive line vs. Wisconsin defensive line. Bret Bielema says this is his deepest line since being Badger head coach. The unit is fortified by players like tackles Beau Allen and Ethan Hemer, along with ends Pat Muldoon and David Gilbert. They will test a young Hoosier front that starts a pair of true freshmen. If the Indiana front can?t get a push to establish a ground game, the vaunted Hoosier offense may struggle.

Key number: 43.9, percent of times Wisconsin has forced foes to go three-and-out. That?s the third-best rate of any team in the nation. Only Florida State (49.2) and Alabama (45.4) have better percentages.

Key note: Indiana has scored 24 or more points in each game this season and 10 straight overall, a school record. Want more? The Hoosiers defense has given up just 17 points in the last 102:12.

3. Northwestern at Michigan | Full scoreboard & TV info
Why you should watch: Let?s call this a ?Legends Division elimination bout.? The loser for all intents and purposes is likely out of the running for the division pennant, while the winner will remain in the thick of the chase.

Player on the spot: The Michigan quarterback-whoever it is. Brady Hoke has said Denard Robinson will be ready to go. But he said that last week, too, and Robinson ended up missing the Minnesota game with a right elbow issue that flared up in the loss at Nebraska. If Robinson can?t go, the Wolverines can turn to Devin Gardner, who looked very good in leading Michigan to victory at Minnesota. With the run game struggling, the Wolverine signal-caller will need to have a good game.

Key matchup: Northwestern quarterbacks vs. Michigan front seven. The defense has been strong almost all season for the Wolverines, as it ranks No. 2 overall in the Big Ten (288.7 ypg) and No. 1 in the nation vs. the pass (145.4 ypg). Michigan hasn?t allowed 200 yards passing in any game. The Wildcats have an interesting two-headed dynamic under center with Trevor Siemian (passer) and Kain Colter (runner). The two must keep the strong Michigan defense off balance for a Northwestern offense that has had issues in recent weeks to succeed.

Key number: 12.1, points per game that Michigan is allowing over the last seven games. Over that span, the Wolverines have yielded just six touchdowns in 28 quarters.

Key note: Over the last four seasons, Northwestern has compiled a 10-5 record in the month of November. The Wildcats are 11-3 in their last 13 regular-season games dating to Oct. 29, 2011.

4. Minnesota at Illinois | Full scoreboard & TV info
Why you should watch: The Fighting Illini are in the throes of a six-game losing skid and have been eliminated from bowl contention under first-year coach Tim Beckman. The Golden Gophers need one more victory to become bowl eligible for the first time since 2009. If Minnesota doesn?t win in Champaign, it may struggle to get a sixth triumph with games left at Nebraska and vs. Michigan State.

Player on the spot: Gophers QB Philip Nelson. The true freshman has been a revelation and will be making his fourth start since having his redshirt taken off. Nelson has completed 41-of-75 passes for 537 yards with six touchdowns and two interceptions. He also has run for 141 yards. Nelson will face an Illini defense that has struggled, ranking ninth in the conference overall (388.2 ypg) and last in scoring defense (33.1 ppg).

Key matchup: Illinois QB Nathan Scheelhaase vs. Minnesota defense. The Illini have struggled on offense all season, but versatile Scheelhaase gives an attack that?s last in the Big Ten in scoring (18.4 ppg) a shot. He just has to stay healthy behind a line that?s struggling. Illinois allows nearly 3.6 sacks a game, worst in the Big Ten and tied for 116th nationally. The Gophers defense has been solid, ranking sixth overall in the Big Ten (343.6 ypg) and third in pass defense (168.1 ypg).

Key number: 3, games Minnesota has won in a row at Illinois. It?s the Gophers? longest road winning streak against a Big Ten opponent since they won four straight at Northwestern from 1985-1993.

Key note: A win on Saturday would be the first Big Ten road victory for coach Jerry Kill. It would also be Minnesota?s first Big Ten road win since a 38-34 victory at Illinois on Nov. 13, 2010. Since then, Minnesota has dropped six straight on the road in the Big Ten.

5. Purdue at Iowa | Full scoreboard & TV info
Why you should watch: Each team is struggling, as the Boilermakers have a five-game losing skid and the Hawkeyes have lost three in a row. A Purdue loss would eliminate it from bowl contention; Iowa needs two wins in its last three games to get bowl eligible. Even with a win over the Boilers, it may be difficult, as the Hawkeyes finish at Michigan and at home vs. Nebraska.

Key matchup: Purdue offense vs. Iowa defense. The Hawkeyes need their offense to produce, but that has been an issue all season for quarterback James Vandenberg and company. Iowa?s attack is No. 11 in the Big Ten (328.0 ypg) and No. 10 in scoring (20.4 ypg). Purdue?s defense is struggling, ranking 11th in the conference in scoring defense (30.2 ppg) and 11th in the total defense (419.8 ypg). The Hawkeye attack finally may take off vs. a Purdue defense that continually yields big plays in the passing game.

Key number: 5, losses in a row for Purdue. It?s the Boilers? longest Big Ten losing streak since 2005. During this skein, coach Danny Hope?s team has lost three home games by a collective score of 116-26. Purdue has allowed 500-plus yards in three games this season.

Key note: The Hawkeyes have won six straight meetings vs. the Boilermakers in Kinnick Stadium, where Purdue?s last victory came by a 27-16 score in 1992. In those wins, Iowa has averaged 30.7 points.