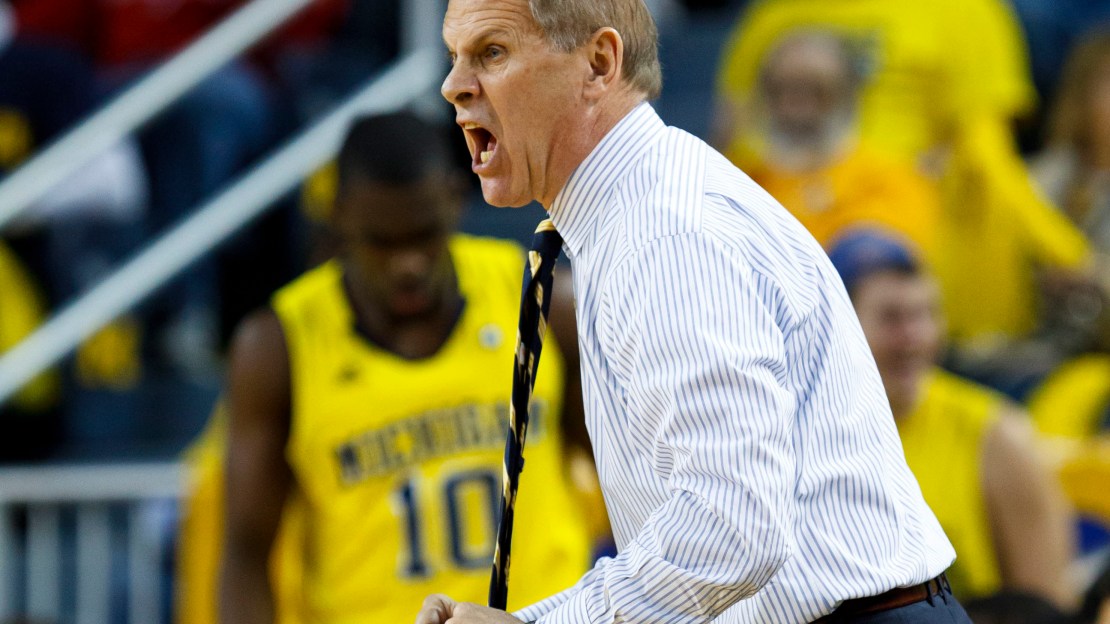 It's already been proclaimed that the preseason expectations for Michigan is this year's Rorschach test. You can find out where we stand by reading our Big Ten chapter in this year's College Basketball Prospectus. You can also read about things like "beware negative covariance come March" and about the Six Degrees of Big 12 Coaches. For now, a referendum on John Beilein in today's Point/Counterpoint.

I know that sounds strange. This is, after all, the coach of those West Virginia teams that Pittsnogled their way into a Sweet Sixteen and an Elite Eight back in the mid-2000s, powered by a devastating offensive attack that included a ton of threes, very few turnovers, and a lot of easy baskets inside the paint. The 2005-06 team, for example, had the 12th-highest offensive points-per-possession in the country. And keep in mind, the top 100 recruits were not banging down doors to go to Morgantown. Indeed, the book on Beilein was that he was a system coach that could get average players to excel on offense, but it was a permissive defense that ultimately held those teams back.

And while that story is probably true in a general sense, the conference numbers don't really bear that out:

I think we can rule out the idea that Beilein is a bad offensive coach. At each team, he improved the situation tremendously from what he inherited. But I don't think we can throw the "great" label around when we're talking about a guy who has never finished higher than 5th in his conference on a points-per-possession basis. Indeed, now that Beilein is putting together rosters that have a fair amount of top talent, it's somewhat of a "prove it" time for Beilein. So far, we know he's capable of turning around programs that are bad, but we haven't seen him take teams to that next level (and no, I don't count last year. While Michigan did tie for first place in the Big Ten, a peek at the efficiency margins confirms that while it was a good team, it was clearly below the likes of Ohio State and Michigan State).

I love conference-only numbers as much as you do, but when we're talking about ranks, context matters. For instance, Michigan did indeed rank sixth in the Big Ten last season in offensive efficiency, but it's important to note that the Big Ten was the most offensive-minded multi-bid conference in the nation:

There were just a lot of good offenses in the Big Ten last season, so Michigan's ranking sixth is nothing to sneeze at. It's more impressive when you consider the number of RSCI top 100 recruits each team had to work with::

Indiana, Ohio State, and Michigan State really should have had good offenses given their recruiting (though the bizarre case of Illinois argues otherwise). Set aside the implication that, given this table, Matt Painter and Bill Carmody are the real offensive geniuses–Michigan scored very well for a team without much top talent.

As you mentioned, it will be very interesting to see what Beilein is able to do on the offensive end with the addition of three top-100 recruits. My feeling is that Michigan's offense will actually take a step back, as the freshmen will have to replace some rather productive role players:

In general, low usage players are easier to replace than high usage ones, but those are some lofty efficiency numbers. Smotrycz's production looks like a reasonable expectation for a freshman Mitch McGary, but Glenn Robinson III and Nik Stauskas might find it difficult to match the production of Novak and Douglass, even with their superior talent.

Michigan might hit a speed bump this season, but I'm still a believer in Beilein Ball.