Debate it: What about that title game idea? 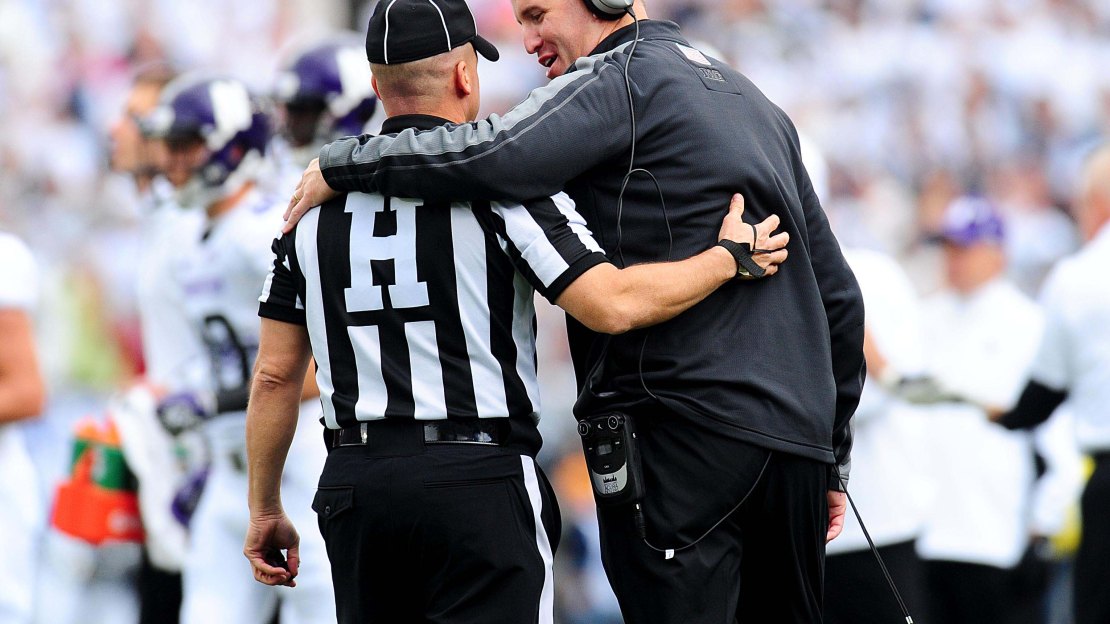 Northwestern head coach Pat Fitzgerald made some waves at Big Ten Media Day when he suggested the Big Ten use a selection committee to choose which team faced the Legends Division champion in this year's conference title game.

More than three months later and good portion of the season complete, many feel Fitzgerald was onto something. Where do our BTN.com guys stand on the issue? Tom Dienhart and Brent Yarina debate it in this post. Let them know what you think at the bottom.

Here's video from last summer's Big Ten Media Day, which includes Fitzgerald mentioning the idea. Jump ahead to the 6:10 mark to hear the specific remarks.

Should the Big Ten have used Pat Fitzgerald?s idea of taking the Legends champ and a wild card team for the B1G title game?

Brent: Nope. The divisions are what they are. They were set up this way, so we must follow the current guidelines. Make an exception here, and we have ourselves a slippery slope.

Tom: Bizarre times call for bizarre measures. With two iconic programs (Ohio State and Penn State) from the same division ineligible, it only seems logical to devise a system that would provide the best matchup. So, match the Legends champ with the highest rated Big Ten team in the BCS standings.

Brent: At this point, Tom, who?s to say there will be a second Big Ten team ranked in the BCS? There?s been four installments so far, and this latest edition is the only one to include two Big Ten teams. Anyway, the Big Ten championship game is designed to pit the Legends Division champ and Leaders Division champ. If you qualify by the rules in place, you should not be shut out.

Tom: I think they could run down the BCS standings as deep as they want to find another Big Ten team, if needed. So, that?s a moot point. The Big Ten championship game is supposed to be the league?s marquee event, a grand punctuation mark on the season. Instead, it likely will be a watered-down affair that few-if any–outside of the Big Ten area will care about. TV numbers and attendance could be abysmal, too. It would be yet another hit on the Big Ten?s football image.

Brent: So we?d make an exception to account for a team that might not even be ranked in the top 25 of the BCS Standings? If that?s the case, there isn?t a true great matchup and most of the nation won?t care about the game regardless. Why break the rules? Now, if Delany and company want to reanalyze things after the season, fine. Maybe create a rule that a team must be .500 in Big Ten play to go to Indy.

Tom: How will the Big Ten and Rose Bowl look if, say, a 6-7 Indiana team gets to the Rose Bowl? Hey, it likely won?t happen, but it could happen. I think it would be a disaster. Even if a third-place team like Wisconsin was to go on and win the Big Ten title with a, say, 9-4 or 8-5 mark, it still would not look good. If according to the BCS standings (or however you want to determine it) the two best eligible Big Ten teams are Nebraska and Michigan, then have them play in the Big Ten title game. Why reward a lesser team under these strange circumstances?

Brent: Because those are the rules in place. You live with it this year and make the necessary changes for future seasons in the offseason. Either way, you?re telling me a possible four-maybe-five-loss Michigan team, with its signature win, at this moment, coming in the final seconds against 5-5 Michigan State at home is something to reward?  I mean, the Wolverines have two wins against teams currently over .500 – 5-4 Air Force and 5-4 Minnesota, neither of which is all that good.

Tom: Michigan was an example. I just want the two best teams in the Big Ten title game. Perhaps Wisconsin will end up being the second highest ranked Big Ten team in the BCS standing, along with Nebraska. Then that?s fine. I would just like to avoid a scenario where two teams from the Legends ranked higher in the BCS standings than the Leaders Division representative.

Brent: OK, then let?s move on to Northwestern, the second Big Ten team ranked in the BCS. Its best win? Vanderbilt (5-4), I guess. It?s lost its two biggest tests, at Penn State and vs. Nebraska. The Wildcats get Michigan this week, so one of your wild cards will tally a quality win. But, as you can see, it sure seems like we?re going out of our way – not to mention bending the rules – to accommodate what are right now above average teams.

Tom: Again, I have no issue with a Leaders Division team playing in the title game this year-as long as it is one of the two highest rated Big Ten teams in the BCS standings. I?m not trying to go out of my way to have two Legends teams in the title game. I just want the two best teams. Period.

Brent: Well, it?s going to be tough for Indiana or Wisconsin to pass both Michigan and Northwestern. I have no problem with Wisconsin-Nebraska. We might as well accept it.

Tom: I have come to terms! I just wish we could see, say, Nebraska or Michigan play Ohio State in the title game! Maybe next year.