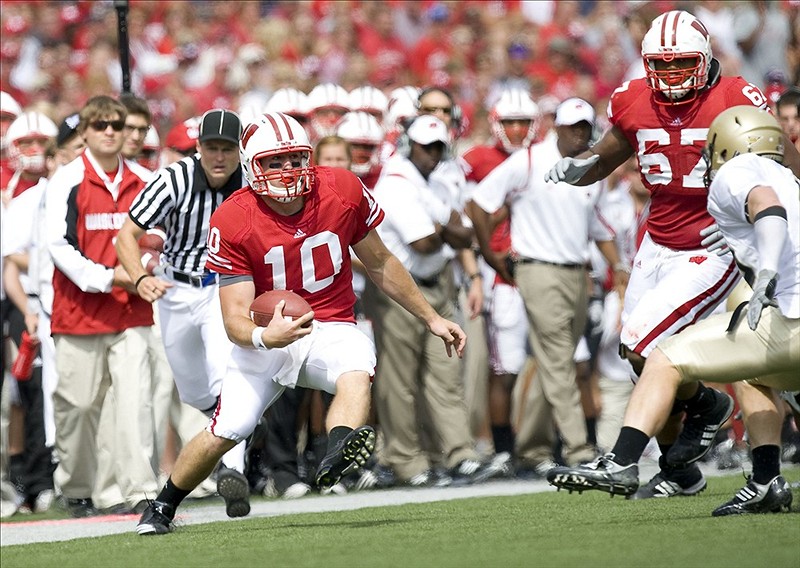 Happy Thursday to you, Big Ten Nation! It certainly must be a happy one for Wisconsin?s Curt Phillips, who according to reports will be the quarterback for Wisconsin at Indiana. Read about that and other Big Ten news in my daily links.

I?ll be honest: I?m shocked about Phillips. I thought Bret Bielema would opt for the more proven and experienced Danny O?Brien. But Philips, a fifth-year senior who has overcome three knee injuries and didn?t play in 2010 and 2011, apparently will be the guy, says Jeff Potrykus of the Milwaukee Journal Sentinel. Philips is more of a run-first signal-caller. So, count on Indiana stuffing the box and making Philips throw. He also can count on getting blitzed. A lot.

Are you getting frustrated by what seems like an increasing tendency for officials to call pass interference? Michigan defensive coordinator Greg Mattison is.

The Wolverines were tagged with four in their 35-13 win against Minnesota–three of which came on the same fourth-quarter drive, setting up the Gophers' final field goal. Michigan now has been whistled for eight pass interferences this year.

"It?s unbelievable,? said Mattison to Mlive.com. ?It really is. It?s OK, as long as it?s everywhere called that way, but that?s not my job to talk about the officials. We have to play better technique. And that?s what we talk to our guys about: They called it, it was a penalty. But that drives me crazy. It really does."

He admits that at times in the past, he has lost his cool. But Pelini feels as though he?s matured as a head coach. I hope he never loses his gusto and sideline passion. It?s what makes Pelini who is-and that?s a darn good football coach.

Good news, Ohio State fans: linebacker Etienne Sabino is targeting the Wisconsin game for his return from a broken leg.

The Buckeyes need his skill and experience at a position that has had issues this season. No doubt, Sabino will help Ohio State matchup with the physical Wisconsin ground game in what figures to be a big game on Nov. 17.

For Penn State to have success in the future dealing with a roster depleted by NCAA sanction, it will need to cultivate a good walk-on program. And few do it better than Nebraska, which is why Bill O?Brien plans to talk with Bo Pelini about the Huskers? famed walk-on program.

And future recruits must be versatile: ?The biggest thing about the sanctions is when we recruit over the next four years we?ve got to make sure that every kid we bring in we can maximize his ability,? secondary coach John Butler said earlier in the season. ?We as a coaching staff have got to be able to get every single ounce of talent from every single kid. There?s no room for error. In the past, if you missed on a guy, he transferred and you replaced him. We can?t do that.?

With three games left and two wins shy of bowl eligibility, Iowa has a sense of urgency. That?s why player development isn?t a priority down the stretch for Kirk Ferentz's crew-it?s all about winning. Now.

So, don?t plan on seeing No. 2 signal-caller Jake Rudock. James Vandenberg will continue to take the snaps. The senior has four touchdown passes. Last year, he had 25-the third-highest single-season total in school annals. Still, Iowa is focused on winning. And, I think that?s the right choice for the seniors.

Anyone who has seen Minnesota junior defensive tackle Ra?Shede Hageman play knows the guy has an NFL future. But it may come sooner rather than later.

He says an early exit to the NFL is worth considering. Marcus Fuller of the St. Paul Pioneer Press says Hageman's NFL stock is rising fast. The 6-foot-6, 300-pounder leads Minnesota's defensive line with 27 tackles, including 6 1/2 for loss. His five sacks rank second on the team and are tied for fourth in the Big Ten. And, seeing as how defensive tackles always are overvalued in the NFL, it wouldn?t be a shock to see Hageman go somewhere in the first three rounds of the draft.

The last 4 Wisconsin QBs making their starting debuts for #badgers have thrown for over 200 yards. Can Curt Phillips make it 5 in a row?

My take: I think it may be close.

Hoke said earlier this week he was weighing personnel changes up front. Said it's still on table, but "we'll see."

My take: I thought the line had turned the corner after the Notre Dame game. But things have regressed. I wonder how this season will end for Michigan.

My take: So now we know.

Tommie Frazier also good analysis of Taylor Martinez: "He is kind of like Dr. Jekyll & Mr. Hyde — you don't know what you're going to get."

My take: Or, as Forrest Gump would describe Martinez: a box of chocolates.