Volleyball Report: Where are the top student sections? 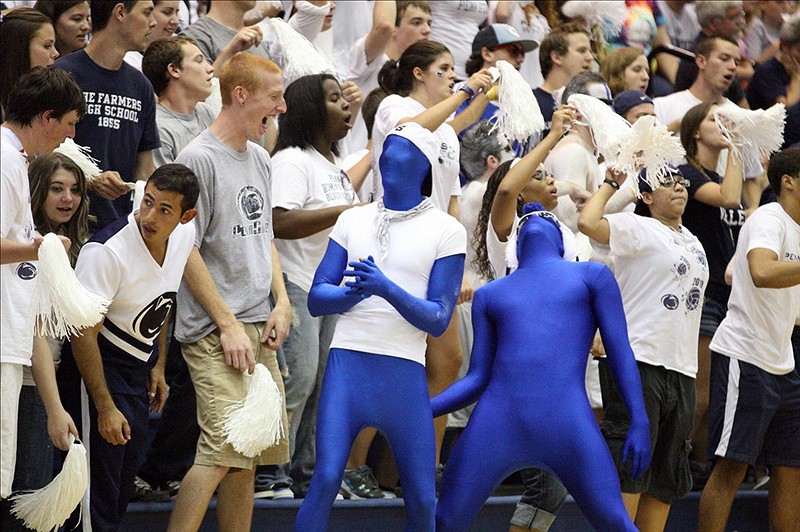 There is little doubt that the Big Ten has the most passionate and largest fan bases of any conference in the nation. Six of the top ten teams nationally in average attendance this season reside in the Big Ten, including four of the top five. Nebraska has the most dedicated fan base in the country with 175 consecutive sell outs of the NU Coliseum, the longest sell-out streak of any women?s collegiate sport.

The conference?s two most successful programs, Nebraska and Penn State, draw the largest attendance numbers and create two of the best environments for volleyball you could hope to experience. Passion is not lacking among Big Ten volleyball fans, but there is an interesting conversation to be had about the varying level of student involvement among the conference members.

Last Wednesday night during the match between Purdue and Illinois I said that the most active student section in the Big Ten conference is the Spike Squad of the Fighting Illini, active being the key word as they are not the largest, nor the loudest in the conference. However, no student fan base has travelled or shown the level of commitment over the past few seasons as the one from Champaign.

Earlier this year a large contingent of Illini students travelled to West Lafayette, Indiana for a Sept. 29 matchup with the Boilermakers. Those fans entered Holloway Gymnasium concealing their orange only to unveil their shirts following the first Illinois point of the match. Whether there was a need to hide their allegiance hardly matters as it represented a student volleyball following, which has mostly been a home court fixture for even the league?s most decorated teams, taking their support on the road.

This is not a new addition for Illinois volleyball this season, as you might expect that on the heels of their first appearance in a national title match that the bandwagon has grown following an unprecedented run. It began in 2011 with the Spike Squad becoming fixtures on the road throughout conference play including a memorable trip to Happy Valley on Oct. 8, 2011 when Illinois knocked off Penn State at Rec Hall for the first time since 1995 with a vocal group of students rooting them on. Combine presence on the road with well rehearsed opponent specific chants from a consistently packed section at Huff Hall and the Illini students are setting the bar for the rest of the conference.

Organization and involvement set the Illini apart but Penn State still has the largest and loudest group of student fans. I reiterate that we are talking about student sections because I can foresee the Husker faithful cringing at the possibility of a louder fan base than those that reside in Lincoln.

For a team that has dominated the conference and national titles for four of the past five years, a vocal fan base is to be expected and this season has not disappointed in energy or enthusiasm at Rec Hall. Nebraska has a vocal group as well but they are limited by the allotted space at the NU Coliseum, which is part of the reason for the move to the Devaney Center next season. The Huskers intend to triple the number of seats available for students next year, increasing from the current offering of 63 seats. Though active in home matches for their teams, what I cannot understand is why the Big Ten?s two dominant powers, that have combined to win eight national titles, do not travel as well as a team that has never finished No. 1.

Geography is a factor with Champaign being centrally located in the conference while Nebraska and Penn State sit out on the outskirts. That however doesn?t explain why Penn State students aren?t at matches in Columbus or why there isn?t a group of the Husker ?Block? in Iowa City when they meet. Scheduling plays a factor with midweek matches becoming more prevalent and the logistics of traveling for students during the week making it understandably difficult to attend. But for the league?s two iconic programs to not have a student presence at some of their biggest matches of the year it takes a little luster off the passion of Big Ten volleyball.

Purdue?s ?Block Party? has a better road presence than Penn State and Nebraska, and the Boilermakers have never been ranked No. 1, let alone this season. In that match a week ago in Champaign there were only a handful of Purdue students who made the trip but they still got loud in Huff Hall as their team went on to win their 13th straight five-set match. The Boiler students also made the trip to Bloomington earlier in the season for a rivalry match that isn?t that long a trip but again Purdue students were there while the more esteemed conference members only show up at home.

It may be asking too much of students who are already occupied with not only academics but supporting the rest of the university?s athletic teams, as well as their own lives, to get out on the road for an Olympic sport. But if two teams that have never won a national title can have an organized and involved following, why can?t two teams that have seen more success than the rest of the conference combined do the same?

Note: It would be an oversight for me to not mention the Ohio State student fans that are as well informed as any group in the conference and make for an imposing atmosphere for teams that travel to St. John Arena. The Buckeye students find unique ways to distract their opponents in each match and often have some interesting characters in their midst in a wide variety of costumes.

Here are the matches to watch live on BTN/BTN2GO this week:

Ohio State is looking to bounce back after dropping a five-set match against Minnesota at home on Sunday. The Buckeyes took a 2-0 lead but could not finish off the Gophers and move into a three-way tie for second place in the conference. Ohio State has recorded some impressive victories over the past few weeks and need to take care of a depleted Northwestern team.

The Wildcats are still in the mix for a postseason appearance but they will need a few resume building wins down the stretch. Dropping matches in straight sets at home against Indiana and Purdue did not help the cause but there is enough talent for Northwestern that when they are on, they can play with any team in the conference.

The Illini are in the same boat they were a week ago, every match is a must win if they hope to keep their chances for a postseason appearance alive. Losing another five-set match to Purdue at home was gut wrenching but Illinois still has a chance if they can pull off five wins in their final six matches. Illinois needs to have their best blocking performance of the season by their two left sides in Jocelynn Birks and Ali Stark to slow down Penn State?s right side Ariel Scott Thursday.

The Nittany Lions have a chance with two wins this week and a little help from around the conference to seal up at least a share of their 15th conference title. Penn State was impressive in two wins last week against Minnesota and Wisconsin but is still seeking consistency. The Nittany Lions are looking to play at the same high level throughout the entire match without letting opponents hang around in matches after Penn State gets out to a lead.