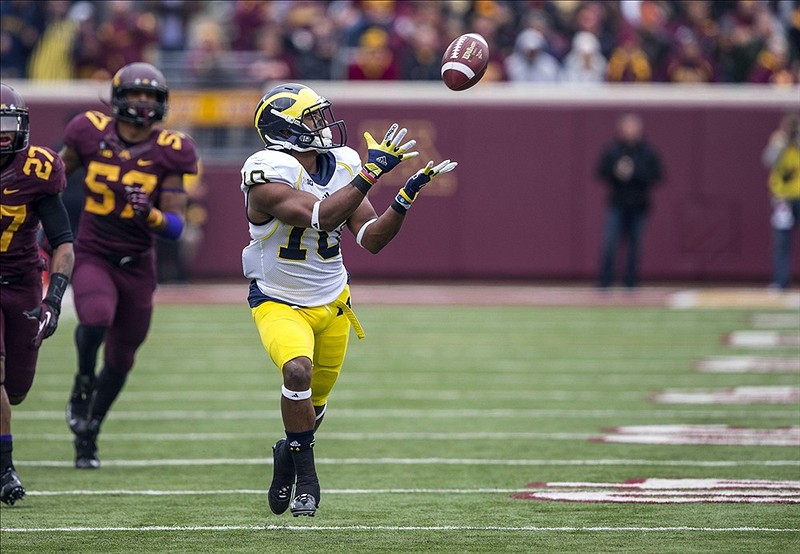 You have questions and, as usual, I have answers. Many of you are curious about Michigan and what it has to do to win the Legends. And how about Devin Gardner? Plus, some Michigan State fans are still riled up about the officiating in the Spartans? loss to Nebraska. Let?s get started.

What does Michigan have to do, to get to Indianapolis? – Kyle Johnson

It?s pretty simple. While Michigan and Nebraska are each 4-1 in the Big Ten, the Wolverines? loss at Nebraska on Oct. 27 put the Cornhuskers in control in the Legends Division. That means Michigan must win out against Northwestern and Iowa at home, and at Ohio State. And the Wolverines also need Nebraska to stumble at least once down the stretch vs. Penn State or Minnesota at home, or at Iowa. Bottom line: If the Cornhuskers get by the Nittany Lions this Saturday in Lincoln, you have to like their chances to win out.

Did you like the way that Devin Gardner passed the ball around to many receivers against Minnesota? He showed up on Saturday after he got rid of the jitters in the first quarter. – James Bock

Yes, I was impressed with how Gardner settled down after the first quarter. He ended up hitting 12-of-18 passes for 234 yards with two touchdowns and pick. He also ran for 21 yards and score. Five different Wolverines caught passes, too, as Gardner had nice field vision in the 35-13 win. Too bad he wasn?t ready to go at Nebraska when Denard Robinson went down with injury.

Yes, it was a nice win for Michigan, but I?m not buying in about Devin Gardner. After all, he did this against Minnesota. What can he do vs. Northwestern this week? – Scott Schlaack

True, Minnesota doesn?t have the same defense as Alabama?s, but it still is a solid unit that ranks No. 6 in the Big Ten (343.6 ypg). And the Gopher pass defense is No. 3 in the conference (168.1 ypg). So give Gardner some credit. But I think Michigan needs to get Denard Robinson back in the lineup soon for the stretch run. I just think his experience and savvy will pay dividends, especially in that season-ending trip to Ohio State. Brady Hoke has said he expects Robinson to play this week against Northwestern, but we shall see. He said the same thing prior to last week?s game at Minnesota, too.

Ohio State should return the majority of its starters in 2013. Do you think the preseason polls for next year will feature Alabama No. 1 and Ohio State No. 2? – Kevin

Hey, I like to look ahead as much as the next guy. But let?s finish this season first! The Buckeyes should be in a good position to start high in the polls in 2013. Players like quarterback Braxton Miller, running back Carlos Hyde and almost the entire line will be back on offense. On defense, cornerback Travis Howard and lineman John Simon are the key seniors to be replaced. Bottom line: A lot of key players will be back for what looks like a top 5 preseason team.

Do you have a comment for us regarding the officiating in Nebraska?s 28-24 win at Michigan State? – Peter Hoholik

I know there are some Michigan State fans who weren?t happy with some of the calls in their game with Nebraska, especially the late pass interference penalty that set up the Cornhuskers? game-winning touchdown. But the conclusion I have come to after years of watching games is this: officials never determine the outcome of a game. Nope. Whenever there is an issue with a team (or person, for that matter), the first place to look for blame is within. Michigan State didn?t play well enough to win. Period. End of story. The Spartans allowed 473 yards of offense, with 313 coming on the ground. That?s 7.8 yards per carry. Maybe if MSU had played better on defense, it wouldn?t have been in a position to let the officials? calls impact the game. Also, Andrew Maxwell hit just 9-of-27 passes for 123 yards. He could have played better. So, it wasn?t the refs who cost Michigan State the game. It?s Michigan State which cost Michigan State the game.

Even if Nebraska wins out, the Huskers can?t continue to commit the stupid mistakes they are committing if they hope to win a big bowl game. – Dee

I agree. I think every Nebraska fan agrees, too. To wit: The Cornhuskers have lost a Big Ten-high 23 turnovers. Fourteen of those have been fumbles lost. And only two Big Ten teams (Minnesota and Ohio State) commit more penalties per game than the Cornhuskers? 6.9 per contest. The Huskers need to get this stuff buttoned up. Now.