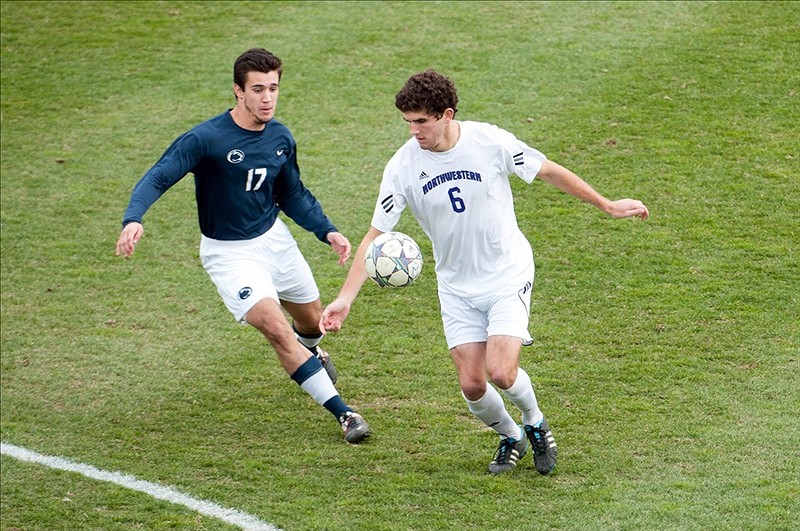 The Big Ten Men's Soccer tournament is set to kick off today at Lakeside Field on the campus of Northwestern following a wild ride to the finish of the regular season last weekend. Penn State and Northwestern each claimed a share of the regular season crown and the Nittany Lions will come into the tournament as the No. 1 seed receiving the bye to the semi-finals due to their head-to-head victory over the Wildcats.

Right off the bat, it would seem as though the host Wildcats would hold a huge advantage over the competition having the tournament at home as they can keep a normal routine, sleep in their own beds and have the comfort of playing on their own field. However, the last time the host university took the Big Ten tournament title, George W. Bush was still in his first term in office when the eventual national champion Indiana Hoosiers won in 2003 at Bloomington. In fact, in the past five years, only once has the tournament host even made the final (Penn State in 2010). So, is home field advantage in the Big Ten tournament overvalued? Maybe, but the Wildcats must be considered a favorite as the defending champions who own a unique stadium where winds off of Lake Michigan can change the dynamic of games and field turf can cause problems for visitors.

Northwestern looks formidable as the home side throughout, yet the Nittany Lions arrive as the team to beat as the extra day of rest has proven to be invaluable in a conference where each game is a slugfest and no team can pencil themselves into the next round. The #1 seed has pulled off the double three out of the last five years, but Penn State has a tough draw as the clear-cut most talented team in the conference, Indiana, fell to the fourth seed and will be their first opponent if they take care of business in the quarter-finals.

Let's take a look at how the entire bracket shakes out and see if the favorites will reign or a lower seed can make a run like the 0-6, seventh seeded Nittany Lions did a year ago.

In the first match up of the tourney, the fourth seeded Indiana Hoosiers get a chance to avenge their shocking 3-1 defeat at the hands of the fifth seeded Michigan State Spartans. I was feeling bullish about the Spartans a week ago, but after being unable to capitalize on their opportunity to win the outright championship in Ann Arbor last weekend, they dropped all the way to the five seed and got the worst possible draw in my opinion. Freshman Jay Chapman may have snuck up on Indiana last time around with his hat trick that doubled as his first career goals, but his name will be highlighted on the scouting report this time and the Spartans will not catch Indiana by surprise either. I believe the Hoosiers will advance to the semis for a date with Penn State.

Next, the second quarterfinal match pits the third seeded Michigan Wolverines, who are playing their best soccer at the right time, and the sixth seeded Wisconsin Badgers coming off two consecutive scoreless draws. Wisconsin, led by talented centerbacks AJ Cochran and Kyle McCrudden are starting to shore things up in the back, but haven't figured out how to click on both sides of the ball simultaneously.

According to Michigan's twitter account, the Wolverines are 7-1-2 when wearing white tops and white shorts, which they will be donning in this match, and that is a statistic that cannot be understated. OK, it can absolutely understated or not stated at all, but I'm still taking a hot team Michigan in this one due to the Badgers' difficulties lately, not the Wolverines uniforms, though.

The last game today features the second seeded Northwestern Wildcats and seventh seeded Ohio State Buckeyes. Chris Hegngi and the Buckeyes have improved as the season has progressed and know this is their only hope to extend their season. The Wildcats though, may need this one to assure their bid to the NCAA tourney so they will be locked in led by 2011 Big Ten tournament Defensive MVP, sophomore goalkeeper Tyler Miller. Overall, I don't think the Buckeyes have the personnel or discipline (1.72 GAA) to unseat the Wildcats and duplicate Penn State's success as the #7 seed last year.

If the results play out as above, I like Indiana to topple the top seed, Penn State and Northwestern to protect their home turf against a Michigan team that looks to be a year away from contending. Penn State has 11 different players that have tallied a goal this year and will have extra rest, but Indiana has one extremely dominant force up top in Eriq Zavaleta (16 G) who they can count on in a single elimination format. Depth could be an issue for the Hoosiers, who only played one man off the bench against Northwestern, but the starting eleven is strongest in the Big Ten especially if Jacob Bushue can go. On the other side of the bracket, Michigan is a different team now than the one that got dominated by the Wildcats early on, but the majority of this Northwestern team has three Big Ten trophies to their name and are too organized and disciplined to let an overall mediocre Michigan team (1.24 goals for, 1.24 goals against per game) deny them an opportunity for a fourth.

In the end, after watching Northwestern and Indiana battle to a 1-1 draw in Bloomington last weekend, it feels like a rematch of that heavy weight fight is needed and a winner must be determined. Despite what the seeding displays, I believe Indiana and Northwestern are the two best teams in the conference and are destined to meet in the final. A.J. Corrado (1 G, 9 A) for Indiana and Chris Ritter (5 G, 5 A) for Northwestern are pure class in the center of the pitch and both defenses are stellar allowing under .80 goals per game.

Northwestern has the rings, but Indiana has the the indisputable Big Ten Offensive Player of the Year to be in Zavaleta. Indiana, at times, looks like one of the best teams in the country, but also can make key miscues like the one that allowed freshman poacher Joey Calistri (7 G) to equalize for Northwestern last time around. I think Indiana will play up to their potential in the tournament and grab the title that they missed by inches in the regular season, but whatever happens it is going to be a 12-round punch for punch championship bout.

Indiana is my pick, Northwestern are the defending champs and the host, and Penn State is the top seed, but anything can happen. This is Big Ten soccer.

Some quality soccer is ahead, starting today and BTN will be there every step of the way. Catch all of the quarter-final matches today on BTN.com with the semi-finals and championship airing live on the Big Ten Network on Friday and Sunday, respectively.

Find more information at the tournament central page on the host site NUsports.com.