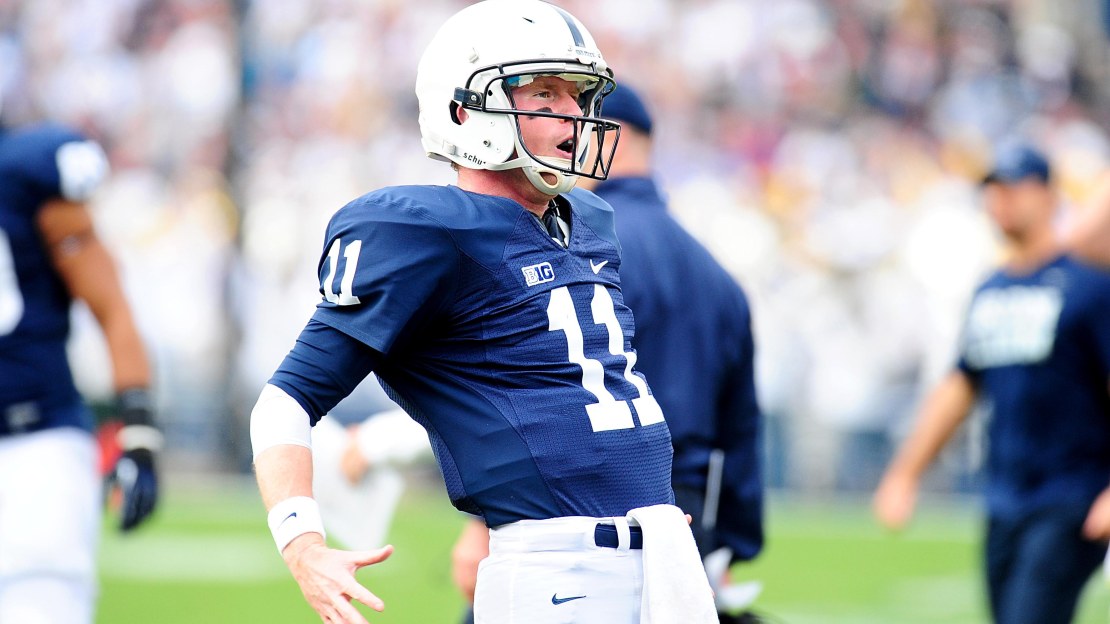 Penn State is the surprise team in the Big Ten. There are many reasons for that. One of the biggest is quarterback Matt McGloin. He has been a revelation running Bill O?Brien?s pro-style offense that makes liberal use of the passing game.

The senior leads the Big Ten in passing yards (2,436) and touchdown passes (18) with just three interceptions while completing 62 percent of his attempts. McGloin entered 2012 with 3,119 career passing yards, 22 touchdowns, 14 picks and a 54 percent completion percentage in his first two seasons, both of which he spent continually fighting for the starting job.

This season, Penn State?s attack has flourished under McGloin, ranking No. 4 overall in the Big Ten (412.2 ypg), while the passing game is No. 2 in the conference (272.0 ypg). But most important: The Nittany Lions are 6-3 overall and 4-1 in the Big Ten heading into a big game at Nebraska this Saturday.

A win over the Legends Division-leading Cornhuskers (7-2 overall and 4-1 in the Big Ten) would be the biggest of the season for Penn State. The team has been on fire since an 0-2 start, winning six of its last seven games. If not for NCAA probation, Penn State would be in the thick of the Leaders Division hunt. But it can?t play in the Big Ten title game or go to a bowl. After playing at Nebraska, the Nittany Lions finish at home vs. Indiana and Wisconsin.

McGloin is coming off one of his best games of the season in a 34-9 win at Purdue, completing 22-of-36 passes for 321 yards with two touchdowns. McGloin, a 6-1, 210-pound native of Scranton, Pa., now has a school-record five 300-yard passing games, eclipsing the standard set by Kerry Collins. Not bad for a guy who arrived in State College, Pa., as a walk-on.

I caught up with McGloin as he prepared for Nebraska.

Q: How big is this game at Nebraska?
A: We are approaching it as another one of our bowl games. We don?t have a bowl game or conference championship game. So, it?s one of our bowl games for us. We are playing it as if it?s our last game. That?s the mind-set we have had each week, playing each game as if it?s our last. Right now, we are just playing to win. We are excited for it. It?s gonna be a good atmosphere, they have respectful fans and it?s gonna be a good game.

Q: What has made wideout Allen Robinson so special? He leads the Big Ten with 57 catches for 689 yards with eight touchdowns.
A: He isn?t the kind of guy who?s gonna come out and run a 4.3 or a 4.4. But his routes are so crisp and he does a great job getting up on defenders and attacking their technique and finding a way to get open. He has great hands and a lot of times you get him in one-on-one and put the ball up to give him a shot to come down with it. He does it a lot. I have a lot of trust in him. He?s only a sophomore, so he definitely has a lot of potential.

Q: Back in August, could you have envisioned yourself and the team having this much success now?
A: Definitely. I always have had a lot of confidence in my abilities and I always have had the players around me to be successful, so I definitely believe that. We easily could be 8-1 right now instead of 6-3. But right now, our goal is to win on Saturday and get to 7-3 and get one step closer to finishing the season out with nine wins.

Q: What do you think when you see yourself passing a guy like Kerry Collins in the Penn State record books?
A: It?s definitely exciting, but I?m really not a big fan of personal goals or things like that. I just want to win and not focus on personal records. Penn State football is the greatest team sport to play. Playing together and seeing guys work well together, I am really glad to be part of it.

Q: At what point did you realize that you could run this pro-style offense that Bill O?Brien brought from the NFL to Penn State?
A: I think toward the end of spring. The first two practices of spring were terrible, to be honest with you. We were confused. We couldn?t even call the play in the huddle, that?s how difficult it was. But we continued to go at it and be coached. We constantly read the playbook. I remember just standing and reading the plays out loud. Toward the end of spring, you could see the offense was starting to get good, we were really starting to understand it. Throughout the summer and camp, we worked hard at it, as well. We are really at our best right now with it. It should be an exciting game on Saturday.

Q: What were you thinking when you started 0-2?
A: I couldn?t believe it, to be honest with you. It was the last thing I saw coming was us starting 0-2 (losing to Ohio and Virginia). We didn?t accept losing but we had to accept the fact we had been beaten twice and we could have folded or continued to push. And we kept pushing and rattled off five wins in a row and have won six of our last seven. It shows you what type of team we are and how we fight and push through things and continue to stick together no matter if we win or lose.

Q: Do you think this team has etched a place in school lore?
A: I think so. It definitely is one of the more important teams in the university?s history. We want to finish it now. We have three games left, and 9-3 sounds a lot better than 6-6. We want to continue to push and continue to play as hard as we can and continue to stick together and finish this year out right.