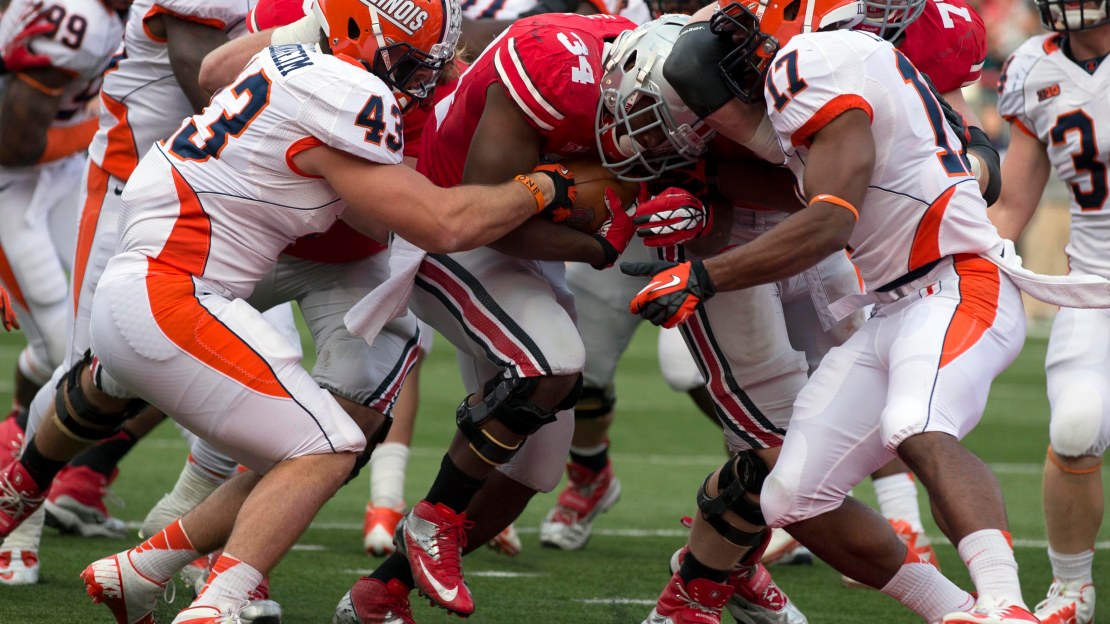 Another week is in the books. The AP and Coaches polls are out. Now, it?s time to release my Top 10 for the week. Here?s a look at the good, the bad and the whatever-the-heck-I-feel-like-looking-at as I glance back on Saturday from my Sunday perch.

1. Is there a more thrilling team in the nation than Nebraska? In fact, it is No. 1 on the Cardiac Poll. The Cornhuskers are making a habit of rallying for thrilling wins. There was a 17-point comeback vs. Wisconsin; a 12-point comeback at Northwestern; a 10-point comeback at Michigan State. Keep those digitalis handy, Herbie.

2. And Nebraska?s run of three wins in a row is all the more remarkable when you remember that stud running back Rex Burkhead has played in just five games this season because of a knee injury and has only 405 yards. Ameer Abdullah has been a revelation as his replacement, keeping the ground game going for the Cornhuskers with 826 yards rushing and eight touchdowns.

3. OK, let?s concede Ohio State?s Braxton Miller is the top quarterback in the Big Ten. The real fun issue: Who is second best? Penn State?s Matt McGloin or Nebraska?s Taylor Martinez? The two will meet next Saturday in Lincoln.

4. How many of these unbeaten teams do you think Ohio State could beat? Alabama? Notre Dame? Oregon? Kansas State? I?m not sure if the Buckeyes could beat any of them, but I think the Buckeyes would have a decent shot vs. the Irish and Wildcats. The Crimson Tide? The Ducks? Not so much so.

5. Did we all rush to judgment and say that Penn State?s Bill O?Brien should be Big Ten Coach of the Year? Perhaps we should pause and give more consideration to Indiana?s Kevin Wilson, especially if he pulls off a win vs. Wisconsin this Saturday in what looks like the biggest game in Bloomington since the Hoosiers capped the 2007 season with a victory vs. Purdue to earn a bowl bid for the memory of Terry Hoeppner.

6. Who else thought Michigan State would be 5-5 through 10 games? That?s exactly what I thought. I had the Spartans not just winning the Legends-but winning the Big Ten. Alas, Michigan State will maintain its seat next to other Big Ten teams that have yet to play in a BCS bowl (1998 to date)-Minnesota, Indiana and Northwestern.

7. With each successive Ohio State win, I recall how the Buckeyes had the choice last season to play in that Gator Bowl vs. Florida or take a bowl ban in 2011 and then play in one this season. If not for that fateful decision last season, this year?s Ohio State team would be primed for a Rose Bowl berth-and perhaps more.

8. I?m not sure if Purdue or Illinois will win another game. Oops, that?s right: These two struggling teams will meet in Champaign on Nov. 17. As it stands, the Boilermakers have lost five in a row, and the Fighting Illini have lost six in a row and already are eliminated from bowl eligibility. I thought each program would be a dark horse this season. Boy, was I wrong. Really wrong.

9. Speaking of struggling teams, Iowa may also have issues getting bowl eligible. The Hawkeyes have four wins with games left vs. Purdue, at Michigan and vs. Nebraska. How much has Iowa struggled? Two of Iowa?s three FBS wins have come by a combined four points.

10. Wisconsin?s run back to the Big Ten title game may not be such a sure thing. The Badgers are a bit of an unknown with quarterback Joel Stave out with injury. Wisconsin has games left at Indiana, vs. Ohio State and at Penn State. This could be interesting.