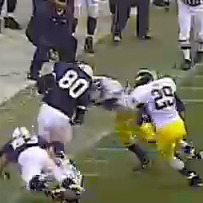 On Saturday's pregame football TV show, BTN profiled two former Big Ten football players who will be forever linked after a collision in a 1997 football game between Michigan and Penn State. In the feature story, Michigan safety Daydrion Taylor and Penn State tight end Bob Stephenson discuss the hit and what life has been like for the past 15 years since then. Watch the full feature here and read their own words in this post.

Both men coach football today as Stephenson is the head coach of the sixth and seventh grade little league football team while Taylor coaches in high school.

Daydrion Taylor:
"I remember missing a tackle on (Penn State running back) Curtis Enis. And I went too low and I kind of dived at his legs and I ended up missing that tackle."

"I knew then that if I had another opportunity to make a tackle, I knew without a doubt in my mind I would make that tackle. So the next opportunity I got was the Bob Stephenson play."

Bob Stephenson:
"What I remember is bobbling the ball and trying to sneak past Joe Jurivicius who was blocking a D-back, and not seeing the safety Daydrion Taylor coming up."

"I think I was unconscious for two minutes, waking up knowing something was wrong because everyone was on top of me."

Taylor:
"I remember going numb. It felt like for two minutes. When I look back on it, it was more for four seconds. And so, I was looking up at the official and (Michigan teammate) Charles Woodson was standing over me and I was telling him, 'I can't feel my legs. I can't feel my legs.'"

Stephenson:
"The ironic part was when I woke up, I didn't know what was wrong, but I felt fine. Didn't have a headache or anything. In fact the video shows that I was smiling and laughing with teammates and everything else. However about 15 or 20 minutes later it felt like my head was about to explode. I never had that much pressure."

"The result of that play was a grade three concussion, which medically placed me from not being able to participate in any more games. That was the last time I donned a helmet."

Taylor:
"In today's football, my lick would probably be viewed as a clean hit, but would probably be used as an example to protect offensive players. And I totally understand that because safety is important."

"I just remember a team of doctors coming in and closing the curtains, and they told me, "Is there anybody you can call because we are going to schedule surgery for you on Monday, which we are going to go in and take bone out of your hip and we are going to put it in your neck and fuse your neck together. We are also going to put you in this halo, which is four screws in your skull to make sure your neck is stable.' And so at that point I was in tears like any college player would have been when you realize your career is over with."

Stephenson:
"I sent him an email to see how he was doing. I almost felt in terms of the injuries itself, he got the worst of it."

Taylor:
"I read the letter. But at the time I was still real disappointed that the situation had happened, and I didn't have a chance to write him back

"It's just unfortunate that play affected two lives like that. If I had could have my way we both would have walked off the field and continued to play the game of football that we loved. But unfortunately it didn't work out that way for either one of us. And so we both had to find different avenues in life."

Stephenson:
"I just want to give back to the kids and give them the proper technique. I want to teach them how to block and how to tackle and hopefully they won't sustain any injuries throughout their careers."

"The biggest thing we talk about hitting is keeping your head up. We try to make sure that nobody ever uses the crown of their helmet, and that they are always hitting with the shoulder and then with the face, the front part no spinal cord injuries occur."

Taylor:
"Once you play at a high level like we both did, you want to come out and share the values that you learned with as many people that will listen. For me football was a way out. You have many kids that can use the game of football in order to get the values that they need to be successful in life and avoid harmful situations."

Stephenson:
"I'm at peace with the hit. That's the game of football. I think that is why people get into football. You are allowed to go full speed and knock somebody down, help them up and knock them down the next play again. That's what football is about."