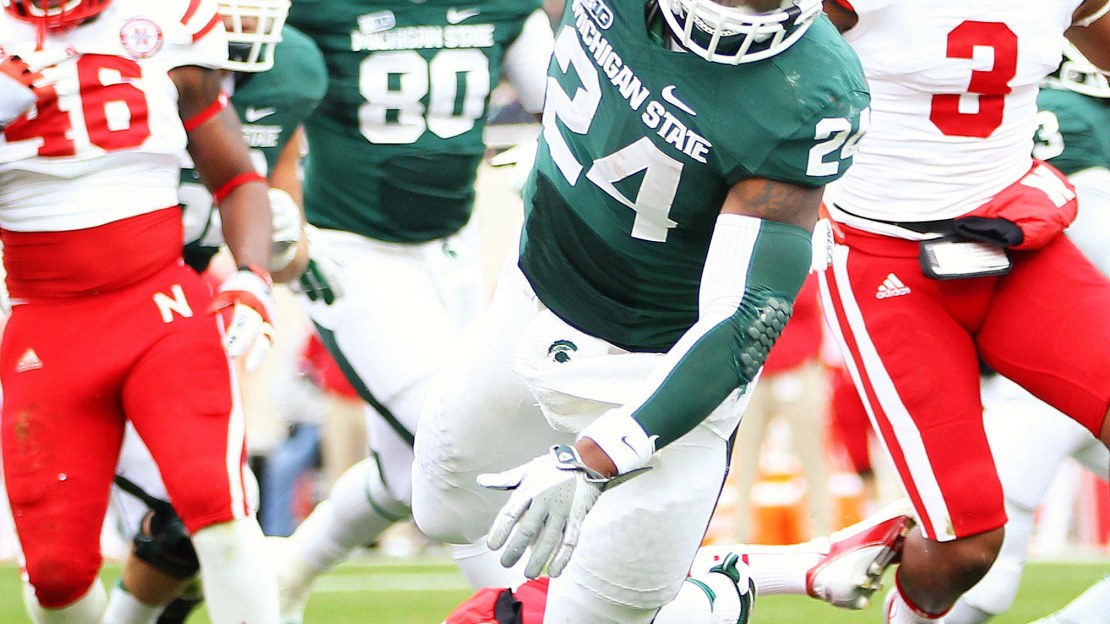 Michigan State's Le'Veon Bell ran for 58 yards and one touchdown in the quarter, and the two teams are tied 7-7 at the end of the first. The Spartans struck first when Bell pounded in an 11-yard touchdown run, the final play of a 10-play, 68-yard drive.

No. 21 Nebraska tied the score at seven after Taylor Martinez found Ameer Abdullah open for a two-yard touchdown pass to end a five-play, 75-yard drive. The Cornhuskers' drive was highlighted by Martinez's 59-yard run.

Nebraska has the ball at its own 21-yard line to begin the second quarter.

Player on the spot: Michigan State RB Le?Veon Bell. He has seen his production wane the last two weeks, running for 68 yards at Michigan and 77 at Wisconsin. In fact, Bell has rushed for over 100 yards just twice in the last five games. He needs a big game to keep a surging Cornhusker defense off balance and open room for a pedestrian Spartan passing game.

Key matchup: Nebraska quarterback Taylor Martinez vs. Michigan State linebackers. Martinez paces the Big Ten in passing efficiency, throwing a Big Ten-high 16 touchdown passes while notching 1,781 yards passing. Martinez also ranks 12th in the Big Ten in rushing, averaging 57.6 yards per game. He hit 7-of-13 passes for 80 yards with a touchdown and interception and ran 12 times for 23 yards last year vs. MSU. Spartan linebackers Max Bullough, Denicos Allen and Taiwan Jones need to contain Martinez in the run game while getting after him as pass rushers when they aren?t dropping into coverage.