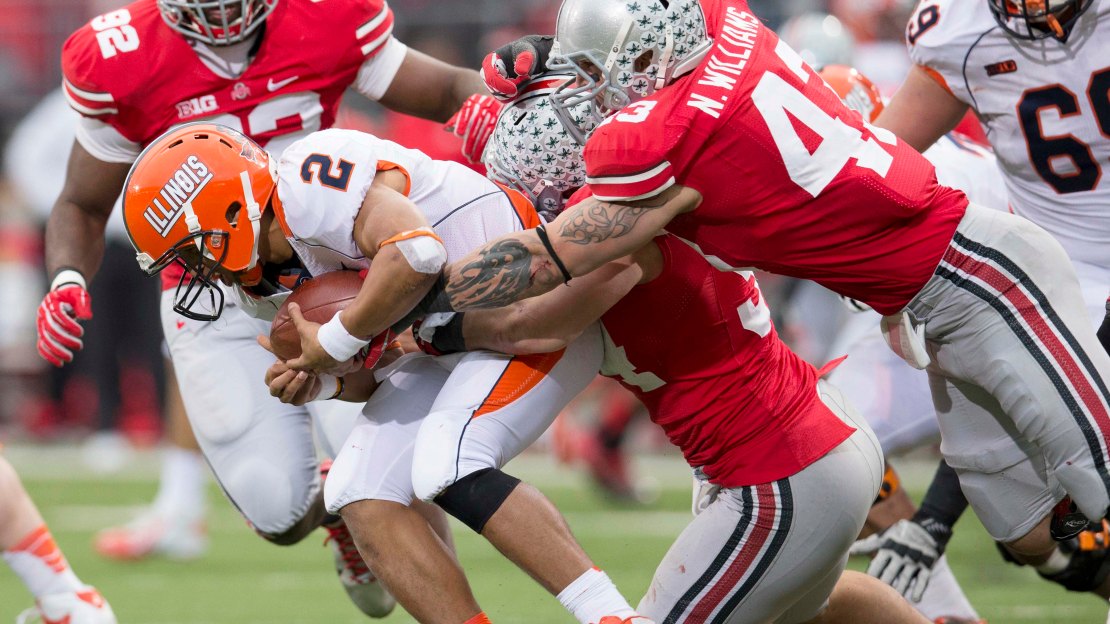 Carlos Hyde rushed for 137 yards and three touchdowns and Braxton Miller passed for two scores and ran for another to lead No. 6 Ohio State past Illinois 52-22 on Saturday. The Buckeyes (10-0, 6-0 Big Ten) maintained the upper hand in the Leaders Division heading into a bye week. They have games remaining at Wisconsin on Nov. 17 and against rival Michigan at home a week later.

Miller, considered a Heisman Trophy hopeful, had 18 carries for 73 yards, and completed 12 of 20 passes for 226 yards.

FINAL: Carlos Hyde broke out against Illinois, piling up 138 rushing yards and scoring three touchdowns to lead No. 6 Ohio State to a 52-22 victory on Saturday at Ohio Stadium. The Buckeyes' explosive offense used big plays to take down the Fighting Illini.

Ohio State burned Illinois' defense for eight plays of more than 20 yards. With 5:40 to go in the second quarter, Braxton Miller and Rod Smith hooked up for a 51-yard touchdown, the Buckeyes' longest play on the day. The touchdown gave Ohio State a 24-6 lead.

The Buckeyes' Miller passed for 226 yards, completing 12 of 20 throws. He threw two touchdowns and no interceptions. Miller was also a threat on the ground, as he rushed for 71 yards and one touchdown on 18 attempts.

Nathan Scheelhaase threw for 103 yards while going 18-32 for the Fighting Illini. He threw one interception. Scheelhaase was also a threat on the ground, as he rushed for 29 yards on 17 attempts. Scheelhaase looked for Darius Millines often. He hauled in five catches for 37 yards.

Illinois racked up 177 total yards. The Fighting Illini's rushing attack only managed to contribute 74 yards on 33 carries in addition to Scheelhaase's passing effort.