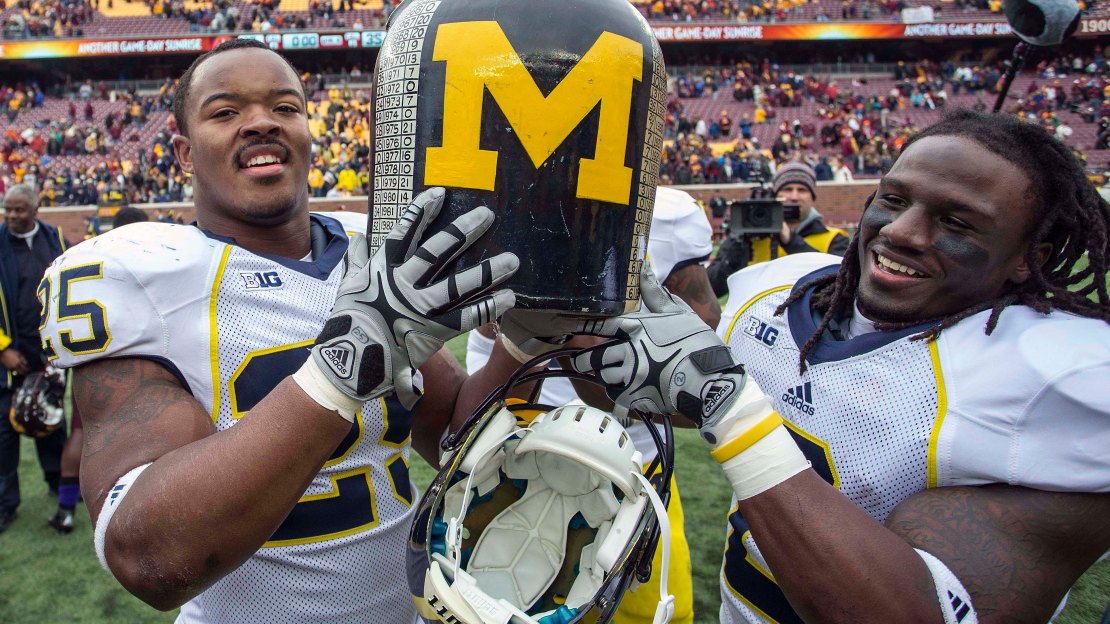 Devin Gardner replaced Denard Robinson in a surprise quarterback switch by Michigan right before kickoff, throwing two touchdown passes and running for another score to lead the Wolverines past Minnesota 35-13 on Saturday.

Gardner woke up the Wolverines (6-3, 4-1 Big Ten) after they went two straight games without a touchdown, guiding scoring drives of 91, 90, 86 and 79 yards to squash the hope the Gophers (5-4, 1-4) had of an upset with Michigan's senior star on the sideline.

Robinson has been bothered by nerve damage in his right elbow, but he was expected to play. Gardner didn't let the Wolverines down, going 12 for 18 for 234 yards despite one interception to hand the Gophers their 38th loss in the last 41 games for the Little Brown Jug trophy. Minnesota hasn't beaten Michigan at home since 1977.

FINAL: Michigan secured a 35-13 win over Minnesota on Saturday at TCF Bank Stadium thanks to a number of scores in the fourth quarter. Devin Gardner and Jeremy Gallon had a passing connection going, as Gallon racked up 71 yards and one touchdown on four catches en route to a win for the Wolverines.

Michigan's offense dominated, ripping off huge chunks of yardage. The Wolverines burned the Golden Gophers' defense for five plays of more than 20 yards. Michigan added to the highlight reel when Gardner found Roy Roundtree open for a 47-yard pass with 10:25 left in the fourth quarter. Later in the drive, Gardner took a quarterback draw all the way for a three-yard touchdown run, which gave the Wolverines a 28-10 lead.

Minnesota's Philip Nelson passed for 141 yards, completing 13 of 29 throws. He threw one touchdown and no interceptions. Nelson also ran for 44 yards on 13 attempts.

Gardner threw for 234 yards while going 12-18 for Michigan. He threw two touchdowns and one interception. Gardner also ran for 23 yards and one touchdown on 10 attempts.

The Wolverines' offense finished the game having gained 388 yards. In addition to Gardner's efforts through the air, Michigan also rushed 41 times for 154 yards.