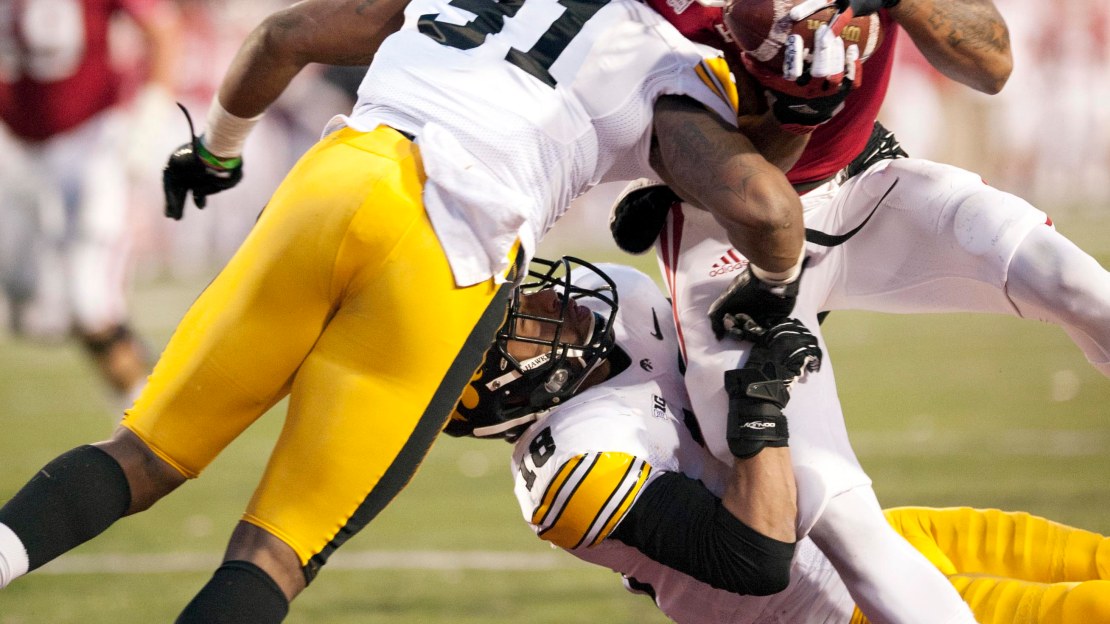 Damon Bullock ran for 83 yards on 25 carries for the Hawkeyes, who played without running back Mark Weisman.

The Hawkeyes regained the lead early in the fourth quarter on a Bullock 4-yard touchdown run to give Iowa a 21-17 advantage. But Coffman threw a 31-yard go-ahead touchdown pass to Latimer with 10:58 left to give the Hoosiers a 24-21 lead.

FINAL: Cody Latimer hauled in seven passes, including three touchdowns, for a total of 113 yards in Indiana's 24-21 victory over Iowa on Saturday at Memorial Stadium. Things looked grim for the Hoosiers, but Indiana stormed back to clinch the victory. The Hoosiers climbed back from a 14-point deficit to pull off the comeback.

Indiana's offense dominated, ripping off huge chunks of yardage. The Hawkeyes' defense gave up seven plays of at least 20 yards. With 9:35 to go in the third quarter, Cameron Coffman found Kofi Hughes open for a 77-yard pass, the Hoosiers' biggest gain of the game. Later in the drive, Coffman and Latimer hooked up for a six-yard touchdown, which gave Indiana a 17-14 lead.

Iowa's Kevonte Martin-Manley was productive despite the team loss. He scored one touchdown and snagged seven passes, good for 132 receiving yards.

The Hoosiers' Coffman was good for 315 yards during the game, completing 21 of 33 passes. Coffman finished the game with three touchdowns and no interceptions.

Indiana finished with 473 total yards, including 406 yards passing while completing 31 of 49 attempts. The Hoosiers' rushing attack contributed just 67 yards to the total, with the tally coming on 30 carries.

The Hawkeyes' James Vandenberg went 21 of 34 through the air for a total of 252 yards. Vandenberg finished the game with one touchdown and one interception.

Iowa's offense finished the game having gained 348 yards. In addition to Vandenberg's efforts through the air, the Hawkeyes could only muster 96 yards rushing on 30 attempts.