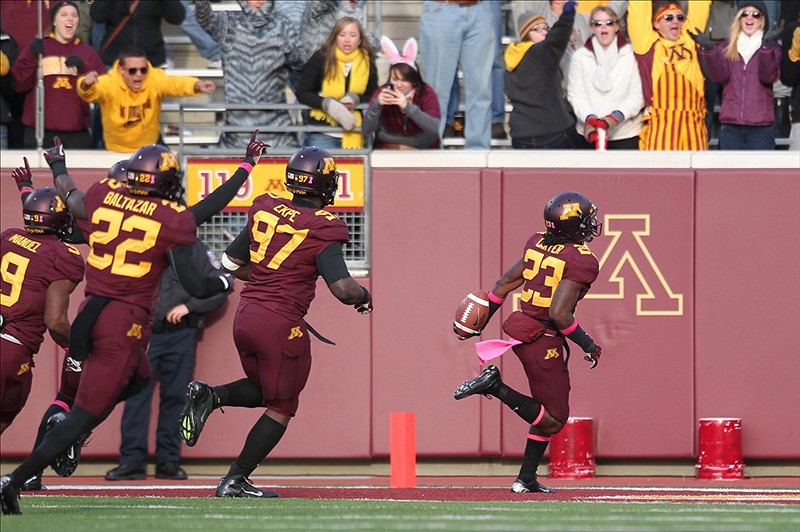 Among my other daily links from around the Big Ten, Doug Lesmerises of the Cleveland Plain Dealer got an exclusive interview with New York Jets quarterback Tim Tebow. You may have heard of him. In addition to being known for an iconic pose, Tebow once was a Heisman winning quarterback for Urban Meyer at Florida. Lesmerises talked to Tebow about a variety of subjects, including Buckeye quarterback Braxton Miller. What advice would Tebow give Miller?

Now my other links …

Check out this uplifting story-among my other daily links from around the Big Ten–from Marcus Fuller of the St. Paul Pioneer Press on Golden Gopher cornerback Michael Carter. Carter came oh-so-close to getting booted off the team last season for general misbehavior. But a call from Minnesota legend and cousin Tyrone Carter changed the course of Carter?s career. Now, he?s enjoying a standout season and is a big reason why the Golden Gophers are a win from bowl eligibility. This is why you never give up on people.

Marc Morehouse of the Cedar Rapids Gazette has his weekly edition of ?Three And Out.? The topic is offensive coordinator Greg Davis. Let?s just say that his tenure hasn?t gone as expected thus far, but four games remain. So, let?s see how this finishes.

I have a new favorite player in the Big Ten. It?s Penn State quarterback Matt McGloin.

What?s not to love about a guy with a never-say-die attitude who has emerged from former walk-on to become a player whose contributions never may be forgotten at Penn State. Not bad.

The bad news: Michigan is coming off a loss at Nebraska. The good news: Michigan is unbeaten coming off losses under Brady Hoke.
http://www.annarbor.com/mi/wolverines/2012/11/michigan_looks_to_stay_unbeate/
The Wolverines are 4-0 after defeats with Hoke at the helm, outscoring foes 142-66. I guess this is bad news for this week?s foe Minnesota, right?

The Purdue offense needs a spark. And Rob Henry is just the guy who could provide it when Penn State comes to West Lafayette this Saturday.

Henry is one of the Big Ten?s most versatile players, taking reps at quarterback, receiver and running back. His jack-of-all-trades skills will come in handy vs. a stout Penn State defense that ranks No. 4 in the Big Ten (329.5 ypg). Time is running out if the three-win Boilermakers want to make a bowl game, as they need to take three of their last four games to qualify for the postseason. It?s gonna be close.

O?Brien said: "I want things defined, 'What is this, what is that, what are we looking for, here?'" He specifically wants to know what happens to questions after he submits them. "That will be one of my questions: OK, what happens when we send 'em in? We get a response, but what's done about that? Do we try to fix the problem, do we just, OK, that was the answer, all right, next game? So those will be things I will try to address after the season."

Don?t worry about those Nebraska offensive tackles, says Jon Nyatawa of the Omaha World-Herald. They are peaking at just the right time with a visit to Michigan State and its tough defensive line.

But are Brent Qvale, Jeremiah Sirles and Andrew Rodriguez ready for the monster that is Spartan defensive end William Gholston, who is coming off one of his best efforts of the season in a win at Wisconsin? It will be a good test for the trio.

Wisconsin is off this week, but that doesn?t mean that the Badgers coaches aren?t busy. In addition to sorting out the quarterback spot, the coaches are recruiting. Check out this video report from the writers of BadgerBeat.

L Bell has 52 runs in big ten play that were 2 yards or fewer. That includes 12 of no gain or lost yards. 5 carries greater than 10 yards.

My take: No doubt, offensive line issues and an inconsistent passing game have hindered Bell this season.

Rex Burkhead walked off practice field in sweat suit. No pads. Would be very surprised to see him play Saturday. #Huskers

My take: His isn?t good, but Nebraska has other nice options, headed by Ameer Abdullah. He?s No. 6 in the Big Ten in rushing (89.5 ypg).

Love the new NCAA rules, penalties. Will love them even more when NCAA shows they have some teeth.

My take: Yes. Talk is one thing. Action is another. Let?s wait and see.

My take: Yet another reason to like Brady Hoke! As if I needed another.