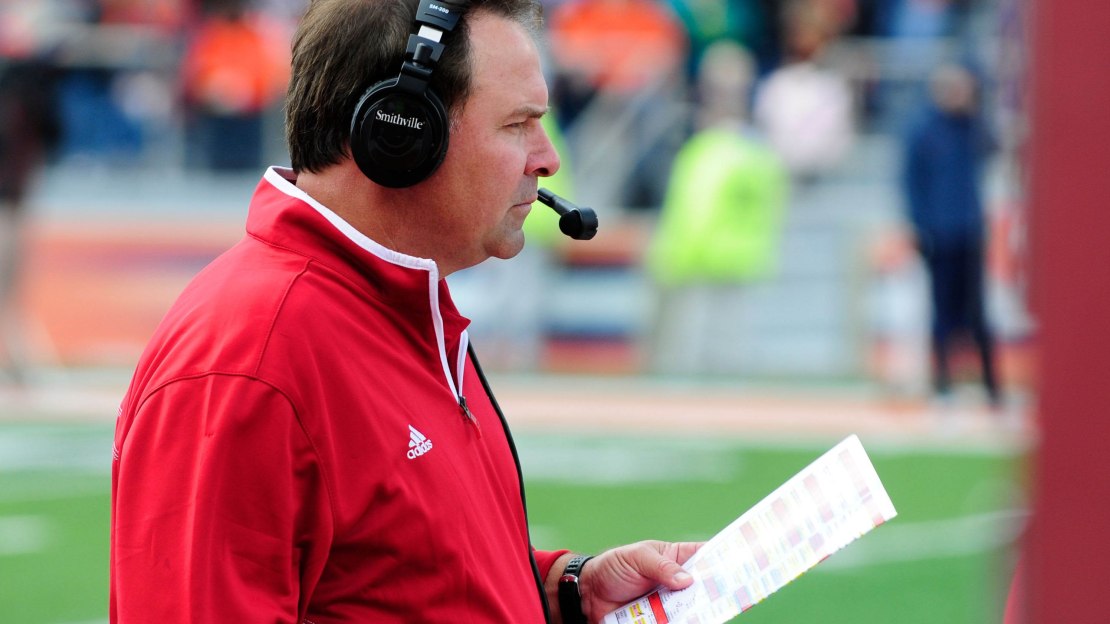 It?s Monday in late October, and I find myself typing about Indiana?s possibilities to win the Leaders Division and go to the Big Ten title game. Really. It?s all true and very possible for Kevin Wilson in his second season in Bloomington. Is this a great country or what?! Read all about that and other pertinent items in my daily links.

That stunning overtime home loss to Michigan State means Wisconsin?s hopes for an outright Leaders Division title likely are over.

But that doesn?t really matter, does it? Of course not. What does matter is Wisconsin still is the in driver?s seat to represent the Leaders Division in the Big Ten championship game. Win in Indianapolis, and the Badgers will play in a third consecutive Rose Bowl. If that happens, the memory of the Michigan State loss and shared Leaders Division title will fade, believe me.

However, according to Tom Mulhern of the Wisconsin State Journal, Wisconsin now must worry about Indiana. That?s right: Indiana. The Badgers and Indiana are the lone eligible teams in the Leaders to win a Big Ten game. The Hoosiers have four games left: home against Iowa and Wisconsin, and at Penn State and Purdue. If Indiana can beat the Badgers in two weeks and win two other games to get to 4-4 in league action, Wisconsin would have to win at home against Ohio State and at Penn State to get to 5-3. Otherwise, the Hoosiers would hold the tiebreaker and go to Big Ten title game. See the standings for yourself.

Lee Barfknecht of the Omaha World-Herald lays out Indiana?s possibilities. And speaking of Wisconsin, Curt Phillips deserves a shot to be the Badgers? quarterback if Joel Stave is out for the season with a broken collar bone.

Penn State played a huge game on Saturday vs. Ohio State. It was a clash the featured arguably the two best teams in the Leaders Division. It hurt the Nittany Lions to lose. But it hurts more to know what Cory Giger of the Altoona Mirror points out: It may be a long time before Penn State plays another game as meaningful.

It?s true. The worst is likely yet to come for Penn State, as scholarship sanctions begin to take hold and rip apart the depth and talent of the roster. No, the Nittany Lions won?t become totally irrelevant as they continue to deal with the four-year probation, but the good times of 2012 figure to be harder to come by in the near feature.

Big Ten title, Legends Division crown ? forget it. Iowa is just trying to become bowl eligible during a season that threatens to careen out of control.

The Hawkeyes travel to suddenly hot Indiana and hope to avoid falling under .500 for the first time since 2007. Marc Morehouse of the Cedar Rapids Gazette says Iowa?s schedule could lead up to a two-week showdown to have a say in the Legends, with at Indiana (3-5) and playing host to Purdue (3-5) on Nov. 10 serving as lead up to at Michigan (5-3, 3-1) and a home finale against the Huskers. We shall see.

Minnesota coach Jerry Kill?s decision to take the redshirt off quarterback Philip Nelson is proving to be genius-and perhaps season-saving.

In just his second start, Nelson led the Golden Gophers to a rousing win over Purdue. Now, Minnesota is one win from being bowl eligible for the first time since 2009. Nelson isn?t the only unlikely star. How about wideout A.J Barker? The redshirt junior walk-on has 25 catches for 442 yards and five touchdowns.

The offense has turned too predictable. How bad has it gotten? The Wolverines have gone 126 minutes and one second without scoring a touchdown, says Kyle Meinke of MLive.com. It?s true. Michigan didn?t score a touchdown vs. Michigan State. And it did score a touchdown on Saturday at Nebraska. The Wolverine attack has become too run-oriented-and just plain too easy to defend and figure out. Michigan is averaging 28.0 points, well off last year's pace of 33.3. It has scored just 26 touchdowns, 79th nationally and eighth in the Big Ten. Factor in that Robinson has a balky right elbow that could continue to limit him as a passer, and you can see why there is concern about the Michigan offense down the stretch.

The losses and criticism are taking a toll on Illinois coach Tim Beckman, who says he?s lost 22 pounds during a five-game skid that has seen the Illini get outscored, 194-62. The weight loss could continue: Up next-a trip to Ohio State.

Purdue will start Robert Marve at quarterback vs. Penn State this week. The change is ?based on competition,? according to coach Danny Hope.
Is it too little, too late for the Boilermakers, who have lost four in a row and are in peril of missing the postseason? We shall see. Now, how will Hope fix a leaky defense? A season of promise is unraveling for a Purdue team that had more returning starters than any other Big Ten school.

Carlos Hyde didn't have great stats, but I'd say this was his best game. Vast majority of yards came after contact. Ran really hard. #OSU

My take: Hyde has been an unsung hero for the Buckeyes with Jordan Hall dealing with injury all season. What a strong runner and good complement to Braxton Miller.

Kill's thoughts on Michigan QB Denard Robinson's elbow injury: "You?ve got to prepare for Denard. That?s the guy who is going to beat you."

My take: But how healthy will he be? Minnesota should just play eight/nine in the box and make Denard throw it. If he can pass and win, hat?s off to Denard. But make him do it-don?t let him run.