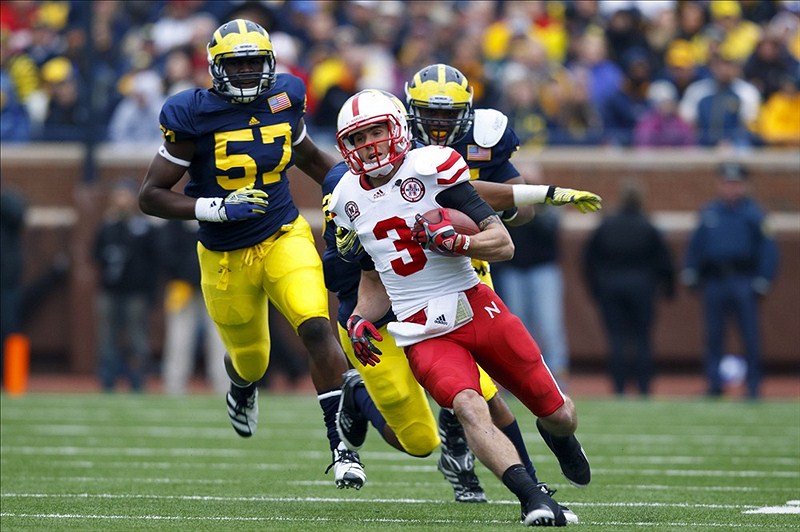 In my preview of this Saturday?s six games, I believe most teams will play with a real sense of urgency. Nebraska and Michigan are two good examples, but Ohio State and Penn State each have something to prove, too. Michigan State and Wisconsin have a history, Iowa leads Northwestern in the standings, and Purdue, Minnesota, Indiana and Illinois each seek their first conference win.

I?ll be in Lincoln to cover Michigan and Nebraska, and you can follow me on Twitter @BTNTomDienhart. I?ll track all of the other games with my usual Saturday Snap Reactions. Drop me your questions at the bottom of this post after you read each of my previews.

1. Michigan at Nebraska | Full Week 9 scoreboard
Why you should watch: This big Legends clash that will go a long way toward determining who will claim the division pennant.

Player on the spot: Nebraska QB Taylor Martinez. He?s the top-rated passer in the Big Ten and leads the conference with 15 touchdown passes. And Martinez is coming off his best game since the opener against Southern Miss, throwing for 342 yards and three touchdowns in a 12-point comeback victory at Northwestern. He needs another big game against a very good Wolverine defense.

Key note: This will be just the second time that two quarterbacks with 5,000 career yards passing and 2,000 career yards rushing will meet, as Denard Robinson and Taylor Martinez each have reached both of those milestones. The other time was 2005, when Texas? Vince Young met Missouri?s Brad Smith.

2. Ohio State at Penn State| Full Week 9 scoreboard
Why you should watch: This contest will have no bearing on the Leaders Division race, since each program is on probation. But it still will be a fun matchup to watch, as both are among the hottest teams in the Big Ten and among the best overall. This could be the first of many big games between first-year coaches Urban Meyer and Bill O?Brien.

Player on the spot: The Penn State running backs. Zach Zwinak, Bill Belton ? whomever. The Nittany Lions passing game is among the league?s best, ranking No. 2 in the Big Ten (257.1 ypg). But Penn State needs to establish a ground game, which has at times been problematic. The Nittany Lions are just No. 9 in the league in rushing (149.3 ypg). Michigan?s run defense is No. 7 (143.0 ypg).

Key matchup: Ohio State QB Braxton Miller vs. Penn State front seven. Miller left last week?s game vs. Purdue in the third quarter with an undisclosed injury. But he?s been cleared and is apparently good to go. We shall see. Miller will need to be on his game, as Penn State has the No. 4 defense in the Big Ten (322.7 ypg), ranking No. 2 vs. the run (113.0 ypg) and No. 2 in scoring defense (15.7 ppg).

Key note: Penn State is among 17 teams in the country with an active winning streak of five games or more, while the Buckeyes are one of 11 undefeated teams and the nation?s only 8-0 team.

3. Michigan State at Wisconsin| Full Week 9 scoreboard
Why you should watch: Wisconsin looks for its fourth win in a row when Michigan State visits in a rematch of last year?s Big Ten title game. The team?s played an epic regular-season game last year in East Lansing, when Kirk Cousins hit Keith Nichol with a last-second, 44-yard Hail Mary touchdown pass to pull out a 37-31 win. A win would be a boon to slumping Michigan State, which has lost two in a row and three of four.

Player on the spot: Le?Veon Bell, RB, Michigan State. He?s coming off his second-worst game of the year, running for just 68 yards on 26 carries vs. Michigan. The Spartans must get the junior established to take pressure off quarterback Andrew Maxwell and the struggling Michigan State aerial game.

Key matchup: Wisconsin offensive line vs. Michigan State defensive line. This is power on power, and strength on strength. The Badgers have just the No. 7 offense in the Big Ten (382.6 ypg), but the attack has come to life of late. Since being limited to 295 yards in a loss at Nebraska, Wisconsin has notched 427, 645 and 443 yards and scored 31, 38 and 39 points in three straight victories. Montee Ball has rushed for 541 yards in the last three games and is now No. 3 in the Big Ten in rushing. Michigan State is No. 1 in the Big Ten in total defense (277.1 ypg) and is No. 1 in scoring defense (15.3 ppg).

Key note: Michigan State?s defense has only surrendered nine touchdowns this season (six passing, three rushing), which ties for the sixth-fewest allowed in the FBS.

4. Iowa at Northwestern| Full Week 9 scoreboard
Why you should watch: This is a battle of teams coming off losses. The Hawkeyes got whipped at home, 38-14, by Penn State, while the Wildcats blew a late 12-point lead and fell at home to Nebraska, 29-28. The winner remains in the thick of the Legends race. The loser?

Player on the spot: The Northwestern quarterbacks, Kain Colter and Trevor Siemian. The offense has struggled the last three weeks, notching 262, 275 and 301 yards, respectively. The Wildcats had 704 vs. Indiana before the three-game swoon. The passing game has been the problem, as Northwestern ranks last in the Big Ten with an average of only 172.8 yards passing per game.

Key matchup: Iowa QB James Vandenberg vs. Northwestern secondary. Look, neither has played well of late. Of the 12 starting quarterbacks in the Big Ten, Vandenberg is No. 12 in passing efficiency. He?s hitting just 55.8 percent of his passes with three touchdowns and five picks. The Wildcats have the worst pass defense in the Big Ten (279.8 ypg), melting down late in losses at Penn State and at home vs. Northwestern. And NU will be without two injured corners in Nick VanHoose and Quinn Evans.

Key number: 90, rushing yards needed by Northwestern?s Venric Mark to hit 1,000 for the season. The Wildcats haven?t had a 1,000-yard rusher since Tyrell Sutton in 2006.

Key note: The Wildcats have won five of the last seven meetings against Iowa, and they've done it with a flair for the dramatic. Four of those seven games have been decided by seven points or fewer, including Northwestern's come-from-behind victory in 2010 in which the 'Cats trailed by 10 points heading into the fourth quarter.

5. Purdue at Minnesota| Full Week 9 scoreboard
Why you should watch: Let?s go ahead and say it: These are desperate times for desperate teams. Each has opened Big Ten play with three losses in a row. A sense of urgency permeates the game. Why? The loser may be fighting for its bowl life.

Player on the spot: How about Minnesota quarterback Philip Nelson, if he gets the start when Purdue visits? He showed flashes last week in his debut, hitting 13-of-24 passes for 149 yards with two touchdowns and two interceptions and ran 16 times for 67 yards in a 38-13 loss at Wisconsin. Perhaps MarQueis Gray will be healthy enough to start. Regardless of who is under center, the Golden Gophers will need a good effort to end a three-game losing skein that has seen Minnesota score 13 points in each of the three defeats. Purdue is equally as desperate, as it too is in the midst of a three-game losing skid to open Big Ten play. The loser of this game may have a very tough time getting bowl eligible.

Key matchup: Purdue offensive line vs. Minnesota front seven. The Boilermaker front has been inconsistent most of the season, causing the offense to wane. In the last three games, Purdue has scored 13, 14 and 22 points. After a strong start, the Golden Gophers have struggled, especially vs. the run. In the last three games, Minnesota has allowed 182, 208 and 337 yards rushing. If Purdue is able to run the ball, the Gophers figure to be in trouble.

Key number: 16, turnovers lost by the Boilermakers. Only two Big Ten teams have lost more (Illinois and Nebraska with 18). Minnesota isn?t much better with 14 turnovers lost.

Key note: Purdue will attempt to win its first game in Minneapolis since the 2007, and win at TCF Bank Stadium for the first time.

6. Indiana at Illinois| Full Week 9 scoreboard
Why you should watch: Indiana?s trip to Illinois is a battle of 0-3 Big Ten teams in the midst of long conference droughts. The Hoosiers have lost 11 Big Ten games in a row; the Fighting Illini have lost nine. Illinois? last league win was a 41-20 triumph at Indiana on October 6, 2011. That pushed Illinois to 6-0 overall and 2-0 in the Big Ten.

Player on the spot: Illinois QB Nathan Scheelhaase. He has had injury issues, which have put a damper on his season. But he should be good to go coming off an off week. With Scheelhaase under center, the Illini offense is much better. He must use his play-making skills to generate some offense for Illinois to have any shot. And, make no mistake about it: The Illini offense must score some points since they'll be matching drives against a Hoosiers offense that ranks No. 3 in the Big Ten with 34.7 points per game.

Key number: 6, passes defended by Illinois defensive end Michael Buchanan. That?s the most in the nation by a defensive lineman.

Key note: For the first time in school history, Indiana has scored 24-or-more points in seven straight games in the same year.