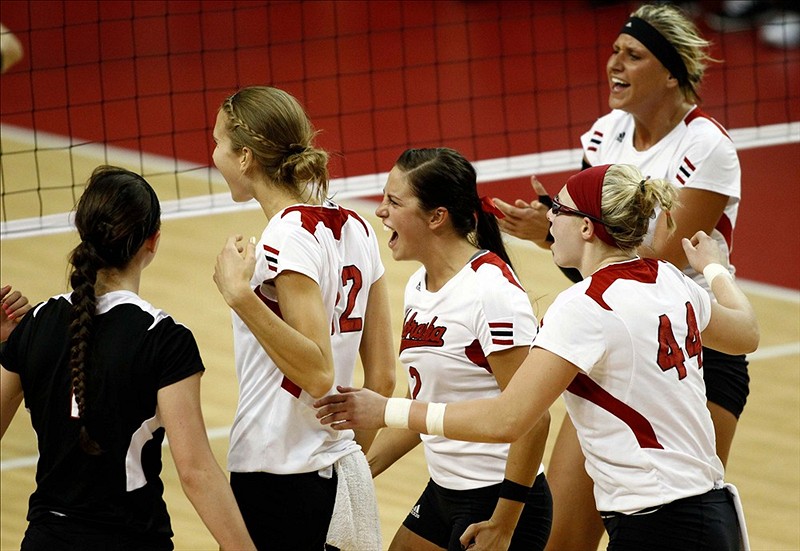 We?ve reached the mid-way point of the Big Ten season and very little has been settled in the conference. But that?s about to change in the next week as one of the most critical matches of the year is on the docket, potentially putting an end to the Big Ten Title race by Sunday afternoon.

It was a streak-busting week for the Indiana Hoosiers as they overcame an 0-8 start to conference play to earn two impressive victories to close out the first half of the Big Ten season.

The Hoosiers pulled out a 3-1 victory over rival Purdue in University Gym on Tuesday night, a result that would be inconceivable if you only looked at the box score. Indiana hit just .088 with 37 attack errors for the match and were out-hit and out-blocked by the Boilermakers, yet somehow recorded their first Big Ten victory since Nov. 12, 2011. Despite numbers that one would expect to doom IU against the No. 17 team in the country, Indiana used aggressive serving and a stellar defensive effort to earn what, for the moment, appears to be a season altering win.

The Hoosiers would finish with eight service aces, four of them from redshirt junior Jordan Haverly, to disrupt the Boilermaker serve-receive game enough to make the Purdue attack predictable at times. While not matching the Boilers in overall blocks, Indiana had enough pivotal stuffs to turn the momentum in their favor throughout the match. Key blocks along with the back row effort from junior libero Caitlin Hansen allowed a team that had been on the verge of victory to finally be able to put a one in the win column. Hansen not only had a then career-high 22 digs, she also made the majority of those plays leaving her feet to keep balls alive, even once diving into the Hoosier bench to continue a rally.

The victory over Purdue ended a 12-match conference-losing streak and was the Hoosiers? first win over the Boilermakers since 2009. Indiana head coach Sherry Dunbar explained the next day that when these two rivals meet, you can throw out the box score. That?s fortunate for Indiana because that is exactly what they needed to do to end the extensive losing streak.

Indiana?s next task would be ending a 20-match conference road-losing streak on Friday night at Wisconsin.

Dunbar said one of the goals coming out of Tuesday?s win was to carry that momentum over to their next match and early on that did not appear to happen. Indiana fell behind the Badgers after suffering 11 attack errors in set one and being out-hit .429 to .097, falling 25-19. A reversal would occur for the Cream and Crimson, as they would have just seven combined errors in the next two sets and get back to the serving effort that lifted them to their win over Purdue.

The Hoosiers would record 11 service aces against the Badgers, including two from true freshman Amelia Anderson to end a deuce set three at 30-28. Leading 2-1 heading into the fourth, Indiana benefited from eight Badger attack errors but also recorded four of their eight team blocks in the set to close out back-to-back conference wins for the first time since 2010.

Hansen would improve on her career effort from Tuesday with a 26-dig performance against the Badgers, averaging six digs per set for the week. Hansen would be named the Big Ten?s defensive player of the week for the first time in her career and solidify her role as the teams libero after losing it earlier in the Big Ten season.

Coaches throughout the conference had reiterated the fact that the Hoosiers record was deceiving, Indiana proved that this week but how will they fare with teams expecting a challenge going forward?

The Gopher senior is having a first- team All-American final year in Minneapolis. Harms is second in the conference in kills per set (4.27) and despite 680 total attacks she is also ninth in hitting (.326).

Harms earns the award despite her team falling in matches to the top two teams in the conference. If the Big Ten?s best right side hitter wants to hold the title at the end of the year, matches at Penn State on Nov. 2 and against Nebraska on Nov. 16 will need to be Katherine Harms showcases. Both matches can be seen on live on BTN/BTN2Go.

Lauren Cook is the rock of this Husker team according to her father, Nebraska head coach John Cook, and she has shown it throughout the season. Cook, who is third in the Big Ten in assists per set (11.18), has led the Huskers to a Big Ten best .309 hitting and has been named the Big Ten Setter of the Week on three separate occasions.

Cook does so many intangibles well that the numbers hardly do justice to what she brings to this Husker team. The same can be said for Penn State?s Micha Hancock, who is tied for first in the conference in assists per set (11.58) and has the Nittany Lions right behind Nebraska with a team hitting percentage of .305.

There is no season award that has a tighter race than the battle between Cook and Hancock. They will meet Sunday on BTN at 3 p.m. ET.

Katie Slay appears to be on a path to a repeat performance from 2011 when she took home the honor. Slay leads the conference in blocks per set (1.41) and has been named the Defensive Player of the Week twice this year.

Though not relevant to her defensive cause, Slay has improved her offensive output for the Nittany Lions and it never hurts to have more chatter about a player when they are hoping to earn postseason honors.

Meghan Haggerty announced her presence to collegiate volleyball with a 17-kill performance against UCLA in the first weekend of the season and has continued to produce for the Huskers. Just the 8th true freshman to start under John Cook, Haggerty is having an upperclassman type year during her first campaign in Lincoln.

Haggerty is 4th in the Big Ten in hitting (.415) and second on the team in blocks and fourth in kills. The Glen Ellyn, Illinois native solidified a spot in the middle that was the only turnover Nebraska had in their lineup coming into the season.

Note: Penn State has won this award in nine of the last ten seasons. To build on that record Megan Courtney would need to have a blistering second half.

At this point in the year it appears that the team that wins the Big Ten Title will also have the conference?s Coach of the Year. Last year the honor went to Purdue?s Dave Shondell but with a narrower conference title field this season, the honor is locked with the Big Ten Title.

The 12-time coach of the year is a step ahead but there is plenty of volleyball left to be played and the Nittany Lions have been vulnerable on the road at times this season.

Note: If Minnesota were to win the Big Ten Title, part of the Coach of the Year award would have to go to assistants Laura Bush and Chris Tamas as they made Hugh McCutcheon?s transition possible. All coaching staffs deserve credit when this honor is handed out but special consideration should be given to Bush and Tamas.

Here are the matches airing live on BTN/BTN2GO this week:

Following the first meeting between these two in Pennsylvania, Russ Rose said that Iowa was the team that played harder despite the Nittany Lions earning a four set win. Penn State was unable to close out Michigan in three sets on Saturday after taking a 2-0 lead and will need to do a better job of sustaining their level of play throughout to continue to stay unbeaten in true road matches.

The Hawkeyes must have a complete effort at Carver-Hawkeye Wednesday night. Without each individual on the floor playing at or close to their best it is going to be a challenging task for Iowa to upset the nation?s top ranked team.

The Boilermakers have lost five of their last six since being tied for the lead in the conference after the first two weekends. Purdue is a better team that what we have seen the past few weeks and they will need to show it against a renewed Michigan team that took No. 1 Penn State to five sets.

This weekend is only the start of the second half of the Big Ten season but this match could very well decide the conference race. Penn State beat Nebraska in four sets on Sept. 19 to start Big Ten play and if they are able to beat the Huskers again on Sunday, the schedule shapes up favorably for the Nittany Lions.

Following the conclusion of this road trip, Penn State will return to Rec Hall for six of their final eight matches, with their only matches on the road at Indiana and at Purdue. In a conference this deep it will still be a grind for PSU but with the Nittany Lions playing in the building where they have won 72 of their last 73 conference matches, the lone loss being to No. 1 Illinois last October, it seems unlikely they will drop a match in Happy Valley.

That makes Sunday?s match all the more vital for Nebraska?s effort to repeat as Big Ten Champions. Last year the Huskers defeated the Nittany Lions in five sets at the NU Coliseum and have without a doubt the best home atmosphere in the country. There will not be another match with as great an opponent or as much on the line in the Coliseum as this one, with this being the final year of Husker Volleyball in the historic venue.  Nebraska must have a big night from Morgan Broekhuis on the right side who had 8 kills and hit .211 in the first meeting. With a Husker victory it becomes a two team race with eight matches to play.

Sunday should be another epic match in a series that has not disappointed college volleyball fans when these two icons meet.