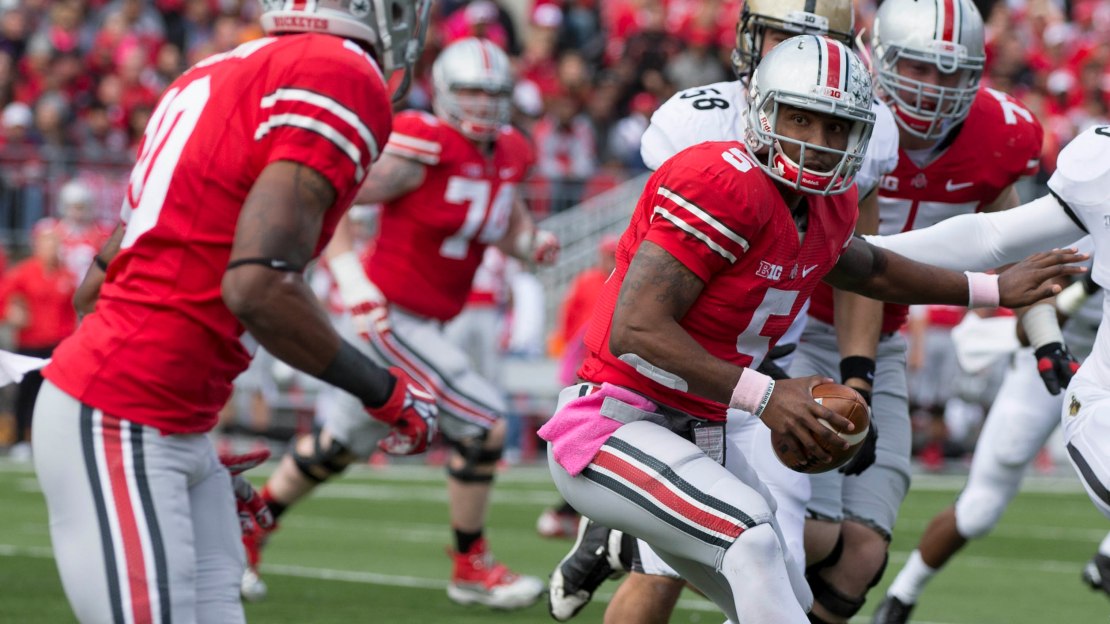 The Big Ten?s relevancy in the Heisman race may be slipping.

Ohio State quarterback Braxton Miller was the conference?s top contender, but he had to leave last week?s game vs. Purdue with an injury. And when he departed, Miller?s numbers weren?t impressive. And this was vs. a Boilermaker defense that had been shredded in each of the two previous games prior to coming to Columbus. Still, Miller has some big games left to impress voters, including this week at Penn State. He also still will meet Wisconsin and Michigan.

Michigan?s Denard Robinson remains in the hunt, as he has engineered three wins in a row and looked good doing it. Plus, Robinson has some big games left that will have the nation?s attention, including this week at Nebraska.

Speaking of the Cornhuskers, I have Nebraska quarterback Taylor Martinez as my No. 3 guy for now. But keep an eye on Wisconsin?s Montee Ball and Penn State?s Matt McGloin. Michigan State?s Le?Veon Bell and Northwestern?s Venric Mark are on the outside looking in for now.

Here are my top three Heisman contenders from the Big Ten, which is looking for its first Heisman winner since Ohio State?s Troy Smith took the honor in 2006.

1. Braxton Miller, QB, Ohio State. His stock took a hit in a 29-22 overtime win vs. Purdue. Miller didn?t look sharp in hitting 9-of-20 passes for 113 yards with no touchdowns and a pick. He also ran 12 times for just 47 yards and a score. Even worse: Miller had to leave the game late in the third quarter with an injury. The sophomore was cleared of any serious injury and reportedly is ready to go at Penn State-winners of five in row–this Saturday. But we really won?t know how sharp Miller is until we see him in action vs. a good Nittany Lion defense. He is fourth in the Big Ten in rushing (119.9 ypg); No. 4 in passing efficiency; No. 2 in total offense (292.9 ypg) for the 8-0 Buckeyes. Penn State has the No. 4 defense in the Big Ten (322.7 ypg), ranking No. 2 vs. the run (113.0 ypg) and No. 2 in scoring defense (15.7 ppg).

2. Denard Robinson, QB, Michigan. Since the five-turnover game at Notre Dame, Robinson has come on. In the three games since, Robinson has hit 29-of-56 passes for 427 yards with three touchdowns and one interception and ran 55 times for 459 yards (8.3 ypc) and two scores. Oh, and Michigan has won all three games. Robinson is No. 1 in the Big Ten in total offense (309.1 ypg); No. 1 in rushing (128.6 ypg); No. 6 in passing efficiency. The senior will face a Nebraska defense that has a recent history of performing poorly vs. dual-threat quarterbacks like himself. Last season, Robinson ran 23 times for 83 yards and two touchdowns in a 45-17 win over the Cornhuskers. But Nebraska is coming off a good effort at Northwestern, holding the Wildcats to 301 yards.

3. Taylor Martinez, QB, Nebraska. He is coming off perhaps his best game of the season-and his timing couldn?t have been better, as the Cornhuskers had to win at Northwestern last week. The junior hit 27-of-39 passes for 342 yards and three touchdowns, while also running 18 times for 65 yards and a score, in Nebraska?s come-from-behind 29-28 win. Martinez is No. 1 in the Big Ten in passing efficiency, hitting 67 percent of his attempts with a league-high 15 touchdown tosses and just four interceptions. He also is 12th in the Big Ten in rushing (57.6 ypg).